join us donate
LOG IN or SIGN UP
Liquid syntax error: Error in tag 'subpage' - No such page slug join
find a vendor
December 14, 2010

Pancakes for all! Homes for all!: A taste of resistance

As we count the days until the one-year anniversary of the 2010 Vancouver Olympics, housing and anti-poverty activists are vocalizing their frustrations with the City of Vancouver's backpedaling on promises to include social housing in the controversial Olympic Village complex in southeast False Creek.

Vancouver Action is one of those activist groups that have been stepping up their game these days. They have vowed to erect a tent city on Olympic Village starting February 1st if the City's promises to build social housing there remain broken.

VAN.ACT! is welcoming the community to help them launch this campaign as they host a big ol' pancake breakfast outside the Salt Building (85 W. 1st Ave.) at 11:30am this Sunday, December, 19th. Everyone is welcome, because as "everyone deserves yummy pancakes, everyone deserves homes!" 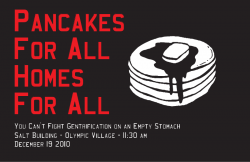 The lighthearted nature of the pancake breakfast shines in stark contrast to the anger many people, including those at VAN.ACT!, are feeling.

When Vancouver originally won the Olympic bid, the City originally pledged to reserve 66% of the 1200 athlete's village units for affordable non-market housing, but after a plethora of planning and budget-related blunders, that percentage has since been slashed repeatedly.

Today, the City's commitment to social housing at Vancouver's Olympic Village stands at less than 10% of all available units.

For more information on the pancake breakfast, or to RSVP, click here.