join us donate
LOG IN or SIGN UP
Liquid syntax error: Error in tag 'subpage' - No such page slug join
find a vendor
June 20, 2016

June Cover Story: David Suzuki sits down with street newspaper 'L’Itinéraire' to talk about his latest book, Trump, and the future 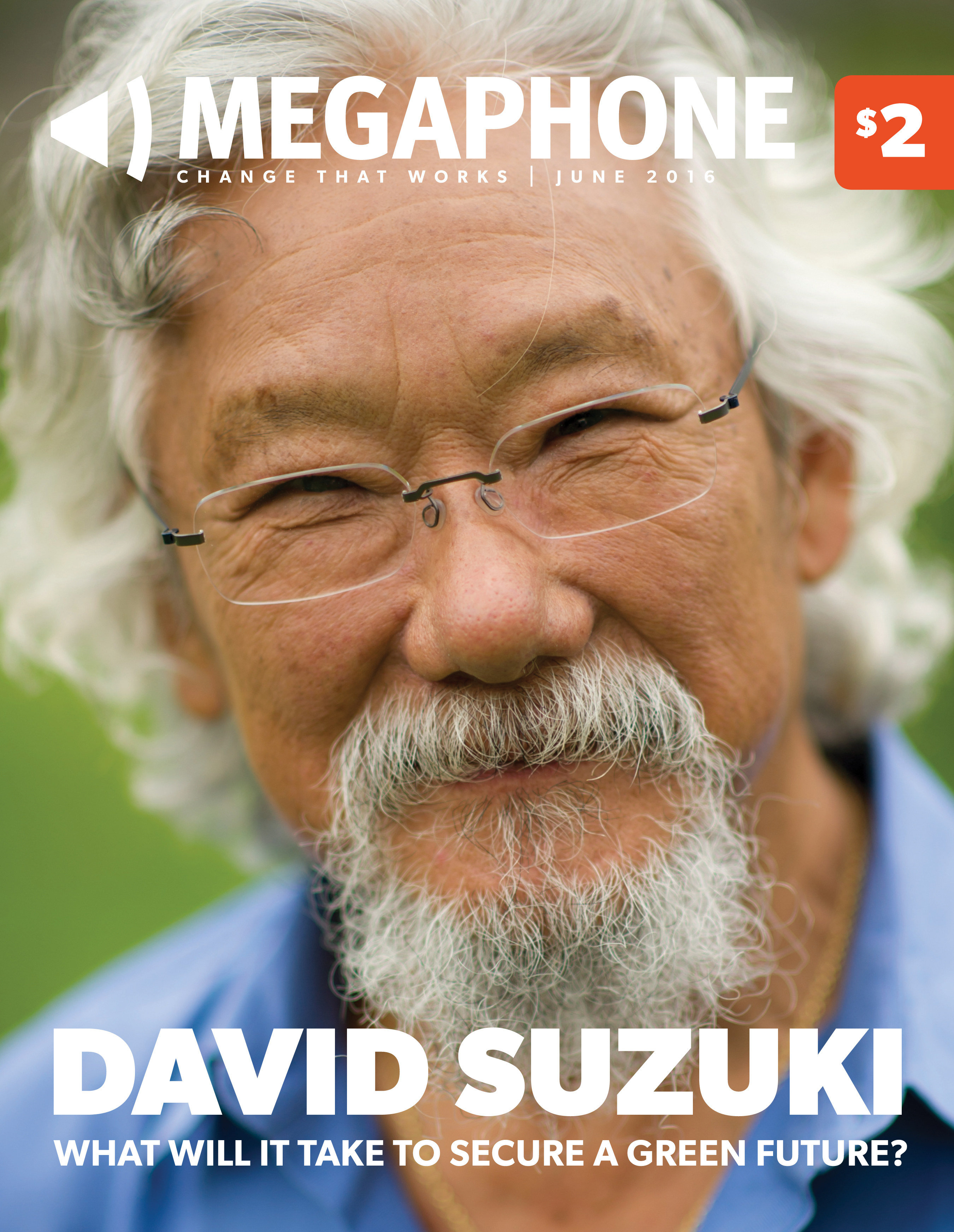 In his latest book, Letters To My Grandchildren, B.C. geneticist and environmental activist David Suzuki recounts the most memorable episodes of his life's journey. Economics, ecology, politics, and citizenship: the 80-year-old grandfather of five covers the major issues facing our society from a perspective that he wants to pass on to future generations.

Norman Rickert: You recently published a book, Letters To My Grandchildren, in which you recount episodes from your life journey. Was it important for you to leave something in writing for your descendants?

David Suzuki: Yes, my grandparents arrived in Canada between 1902 and 1904. They were very poor and had no education, and came to Canada in search of work. They never learned English, but lived here until after the war. My mother and father were born in Canada. They told me, "You're Canadian, and here you speak English. If you want to learn a second language, learn French." I never learned Japanese, and thus never had the chance to have a conversation with my grandparents. When they died, I realized that many of the questions about my family's roots had gone unanswered. Now that I'm nearing the end of my life, I don't want to die without passing on some important values to my grandchildren.

NR: You explain clearly that you experienced racism as a child. Do you think that eugenics (a set of principles aiming to improve the genetic quality of the human population) could once again become a force in the West?

DS: Yes, I think that it could return today. At the start of the 20th century, geneticists were so excited by their discoveries about corn, fruit flies, and mice that they began to transfer their observations to human beings. For example, geneticists studied fruit flies and established a link with alcoholism, but their conclusions were premature. These people weren't crazy; they were geneticists who established a link between their research and the fact that welfare recipients are genetically different. This has had many consequences, such as the influence of eugenics in Alberta. Hundreds of Albertans were sterilized in the years up to 1960 based on the belief that they had mental problems. You have to be careful when you do scientific research; you can make a minor discovery and exaggerate its impact.

NR: Speaking of your father, you noted that, "the very idea of accepting welfare disgusted him." From his perspective, accepting welfare signified a lack of pride and character, and that a person was lazy. There are street paper vendors who support themselves in part with welfare, and want to overcome those prejudices. What would you like to say to them?

DS: Those were the values of that time. Canada was racist when my grandparents arrived. They knew that they would have to work even harder than other people to be able to survive here. Those were the values they passed on to us. There simply was no welfare at the start of the 20th century. The president of the Canadian Medical Association, who was from Newfoundland, had stated that welfare recipients should be sterilized because of their genes. That leads us back to the risk of affirming that these people are different. What I find completely appalling is that no other physician disagreed with that opinion. For example, if I told you that there was a 40 per cent chance that fetuses would later develop alcoholism and drug addiction and 80 per cent of them would receive welfare, we could then decide that we'd save a lot of money by resorting to abortions. That line of reasoning is truly dangerous.

NR: You say in your book that, "we strive to fulfill our desires, and not our needs." Could you tell us more about this theme?

DS: My parents lived through the Great Depression, and they taught us what they had learned: live within your means, save, share, don't be stingy, help your neighbours. One thing that they repeated to us constantly was to work hard in order to earn money to meet our fundamental needs. But we shouldn't chase money in order to become important. I'm proud that our society has programs such as welfare. I believe in a society in which we share with the poorest people. I believe in establishing a guaranteed income for all citizens. But what I see is that these values are crumbling. To former prime minister Stephen Harper, welfare recipients are a burden on the economy, welfare is expensive, and recipients don't play by the rules… This line of reasoning is just bullshit.

NR: You say that young people today have a very different attitude than their elders did at the same age. Do you think that human beings are beginning to change their behaviour?

DS: When I was young, the environment was a low national priority, and there simply was no minister of the environment. Unlike today, ecology was irrelevant. The environment was just a question of resources to be exploited. If it was possible to cut down a forest or drill a well, no one asked any questions, the project just went ahead. We could pollute the air or water without any difficulty because no one understood the consequences of overexploiting resources. Young people today are aware of these issues. They know that current management of the environment poses a serious threat to their future well-being.

NR: Have you already thought about entering politics?

DS: I've already had opportunities to run for office, but I'm too old for that now. I think I have a specific role now, a bit like the elderly members of a community. They are no longer interested in the lure of gain or profit, and like them, I have nothing left to lose. At my age, I no longer feel the desire to play that game. Retired CEOs should speak out about the environment. The CEO of one of the largest timber companies in British Columbia hounded me and attacked me for my beliefs. Once he'd retired, he began to finance my foundation because he knew perfectly well that he'd been wrong.

NR: Does Donald Trump's populist message seem dangerous to you?

DS: You know, I love to hear that, because Mr. Trump shows us the loony side of the Republican Party. I hope that he [has] to run against Bernie Sanders. Bernie came from nowhere, but has struck a sensitive chord with our neighbours to the south, and he's not trailing Hillary Clinton by much in the polls. By American standards, he's a candidate of the extreme left, so a Trump-Sanders race would make for a great ideological debate.

NR: What did you think about last year’s Paris climate conference?Several media outlets called it "the last chance conference?"

DS: It was truly our last great chance. This was the 21st conference of its kind, and the previous ones accomplished nothing. Two recent events give me hope. The two biggest greenhouse gas emitters—China and the United States—have begun to discuss reduction goals seriously. That is a significant step forward. Mr. Harper kept saying that Canada couldn't do anything about global warming, that it was the responsibility of the American government. The other giant step forward was Pope Francis's encyclical, which called each of us to commit to preserving our planet. I'm an atheist, but I've read and reread Francis's encyclical, and it makes me cry every time. I wish I'd written it. The Pope accomplished something tremendous: saving the planet is for him a moral and ethical issue. We're talking about the future of our planet, our children, and grandchildren.