join us donate
LOG IN or SIGN UP
Liquid syntax error: Error in tag 'subpage' - No such page slug join
find a vendor
November 10, 2011 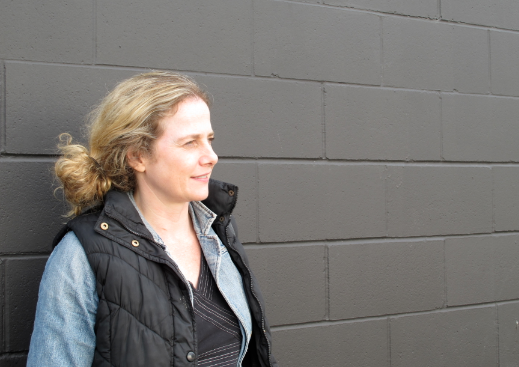 Pathways Information Centre isn’t easy to describe in one breath. The bustling multi-service agency in the heritage building on the northwest corner of Main and Hastings Streets is a community hub, a post office, a phone and internet hotspot, and an information and referral centre that helps people overcome barriers to prepare for, obtain and maintain employment.

People call it the office of the Downtown Eastside, as some 250 local residents pass through Pathways’ doors each day to pick up mail, check email, speak to employment counselors and access services as diverse as they are.

Like other Downtown Eastside agencies that help connect people to jobs, Pathways doesn’t operate like a traditional one-stop employment centre where securing work is the first priority.

While employment can be key for people to make changes in their lives, Pathways operates on the principle that meeting basic housing, health and personal needs is essential for anyone to hold down a job.

With that in mind, Pathways staffers help the centre’s 14,000-plus members access local resources to work through barriers like precarious housing, mental illness, physical health or disability issues and personal matters like abuse and addiction. Building a holistic framework of health, skills, and confidence is the foundational step in the path toward self-sufficiency through employment.

“We try to be a catalyst in people’s lives,” says Ross Gentleman. He’s the executive director of Tradeworks Training Society, the 17-year-old employment skills training non-profit that operates Pathways. Tradeworks has received federal funding for Pathways since 2003, when Pathways was established. Like others who have seen Pathways grow steadily since it started, Gentleman sees Pathways as more than an employment centre.

“It’s a safe haven for people. There are the resources that they can access immediately on the premises. There are 170 or so agencies that they can be referred to if they need mental health assistance, if they need some kind of physical health assistance,” he says. “It’s a crowd that is experiencing real trauma in their lives and want some help in trying to take control of their lives.”

Intangibles like feeling safe, accessing services on one’s own terms, and building relationships at Pathways have had measurable effects. In 2011 alone, Pathways incrementally increased the number of members who enrolled at the centre jumped by 2,000 between January and October. As of this month, 403 Pathways clients were employed this year.

Despite continued successes and its strong force in the community, Pathways is set to close its doors in March 2012, when its $550,000 of annual federal funding administered by the provincial government will stop.

The Pathways closure comes on the heels of the 2009 Canada-British Columbia Labour Market Development Agreement, which saw the B.C. Ministry of Social Development become responsible for administering federal funding for Pathways. 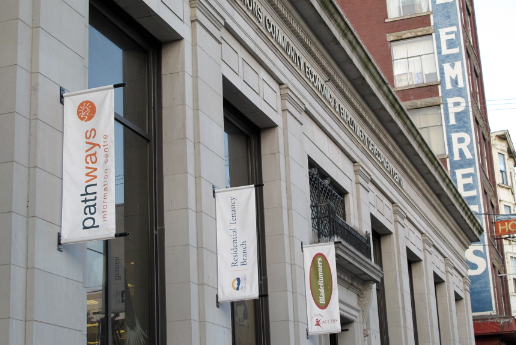 Pathways Information Centre is located at the corner of Main and Hastings. Photo by Jackie Wong.

A year later in 2010, the ministry initiated its Business Transformation Project, which will consolidate employment service delivery into seven Vancouver-area Employment Services Centres (ESCs). According to provincial documents, the new ESCs respond to calls for fewer employment centres in urban areas of the province, and more centres in rural areas.

The ESCs are designed to provide equitable, accessible, flexible access to employment centres across the province. Pathways and other Downtown Eastside employment-related agencies will close with the opening of the ESCs.

Using local health authority boundaries instead of geographic regions defined by postal code, the province drew a new Downtown Eastside catchment area that includes Nanaimo Street to the east, Richards St. to the west, Broadway and Terminal to the south and the waterfront to the north. That means the new Downtown Eastside ESC could be located as far west as Yaletown and as far east as Grandview-Woodlands. Pathways staff are concerned that such a location will be inaccessible to their clients, who tend to travel on foot within a short radius.

Pathways members and volunteers have been petitioning outside the centre to keep Pathways open, but the future looks grim. Several other Downtown Eastside agencies that provide employment related services are also set to close as part of the

Serving those who ‘fall through the cracks’ Pathways program director Carol Madsen is concerned that the people Pathways was originally established to serve will fall through the cracks in the new system. Pathways grew out of a consultation process between community agencies and the municipal, provincial and federal governments.

“They formed Pathways because they said, let’s look after the people that are always going to fall through the cracks,” Madsen explains.

Pathways statistics show that 60 per cent of its members are living on the street, in homeless shelters, on friend’s couches or in supported housing. Many members face chronic barriers to employment including disability, mental illness or personal histories of abuse. It takes an average of seven visits to the building for an individual to meet with employment counsellors, who make it their business to meet clients where they are and build trusting, empowered Madsen says, and she’s concerned that those who currently access services through Pathways will not be adequately served in the new system.

“The new model says, ‘get people to work as quickly as possible,’” Madsen says.

Such an approach may work for individuals whose basic wellness needs are already met, but not for people facing multiple barriers.

Tchavdar Petkov’s recent experiences with job loss, disability, and homelessness proved to him the transformational qualities of Pathways’ holistic approach. Petkov had an accident five years ago that resulted in a brain injury and severe vision loss. Unable to work, he lost the Vancouver apartment he’d occupied for 15 years and became homeless for the first time. Pathways staff helped him find the resources necessary to get back on his feet.

Petkov now lives in a Downtown Eastside bachelor apartment that Pathways helped him find, and he continues to volunteer there as Pathways’ member facilitator and front-desk receptionist. He loves the community there, he says, and he feels a resonant sense of belonging.

“I know hundreds of people in the neigbourhood, and they know me,” he says. “My neighbours who live around here, they know Pathways is the office of the Downtown Eastside. If you need to find out something, if you need help right now, you can find a result here.

“When I first went to Pathways, I was quite fresh. I had a brain injury somewhere in the beginning of 2007. But now I’m very high functioning,” he continues. “I consider myself very lucky that I ended up at Pathways. I built a lot of confidence. I know how to cope with situations and challenges.”

With Pathways’ impending closure, however, others like Petrov may not be so lucky. “In their case, without the help of Pathways, they’ll be lost.”