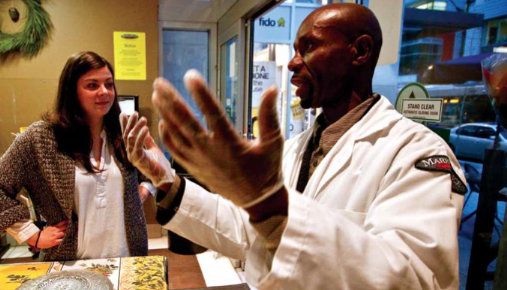 Anyone who doubts the indomitable power of the human spirit should try talking to David Ngomane. An immigrant from South Africa, the founder of Bliss Hot Sauce exudes an airy charm while commanding attention with the subtle humility of someone who has seen it all. His customers have described his 100 per cent natural and organic sauces as addictive, but the history behind the product is perhaps even more gripping.

A born survivor, Ngomane was raised in a loving South African family, but left in 1985 because of escalating political tensions. He wanted to leave home to train as a soldier in the African National Congress (ANC), but was told he was too young and that he had to go to school.

“All I wanted was to get to Mozambique and get some military training so I could go back home and fight as a guerrilla,” he says of the beginning of his odyssey. “So I hitchhiked. I remember being in the Drakensberg mountains on the border between Mozambique and South Africa, being in a bush alone at night, but I had no fear. I remember seeing a pile of animal waste near my head, still fresh. I didn’t know what kind of animal it was, but I laughed and said, ‘Well, so be it.”

Ngomane crossed the mountains into Mozambique with hopes of achieving his dream of becoming a soldier, but when he arrived in his new country and declared himself a refugee he found that his situation remained mostly unchanged.

“They took me to the ANC camp, where they insisted I go to school,” he explains. “I stayed in that transit camp for about a month and went to college in the meantime, but I couldn’t concentrate because all I wanted was an AK-47.”

That distraction ended up getting the better of him as he grew restless with life in the camp. He sold his clothes for money to escape to Kenya, but was given bad directions and ended up getting caught again at the Tanzanian border.

“I was taken back to the ANC camp, where they locked me in an abandoned house,” he says of that very difficult time.

“I escaped at night and tried to make it to Zambia this time. I got caught again and sent back to the ANC camp, where they tortured me, day and night, until I confessed that I was a spy, even though I was not a spy at all.”

Despite his years of suffering, Ngomane is remarkably stoic and matter-of-fact in discussing his past. He cites the steadfast attitude of his hero, Nelson Mandela, as a model for his own desire to forgive his enemies. “I used to be a vengeful person,” he explains, “but I’m not anymore.”

Finding it difficult to pursue him any further, the ANC handed him over to Tanzanian authorities who had heard about his case. “I stayed there in jail for two and a half years,” he winces, “but during that time a UN official came to interview me and he helped me relocate to Canada.”

Once settled in Canada, he worked on perfecting a recipe for the flavourful organic hot sauce that would become his livelihood. Using the cooking skills he learned from his mother, he impressed his friends with his potent creations and quickly realized he had a real shot at breaking into the North American market and sharing his success with those back home. “I love Canada, but I will definitely visit my parents in South Africa again one of these days,” he says, noddin.

“I feel I have to go there once I’m established, though. It’s a process."

“There’s a lot of poverty in Africa, but the culture is solid, the families stay together. When I arrived in Vancouver, I was alone, I had very little, and it was a cultural shock for me. But now I feel like this is my neighbourhood. This is my community.”

Fortunately, Ngomane found an abundance of that evasive sense of family and fellowship in Vancouver’s Downtown Eastside. He made his first few batches of Bliss while living at the Dominion Hotel, where he befriended community support worker Brittney Udall and shared his plans with her. “Brittney has been very supportive. She’s one of my great inspirations,” Ngomane asserts with wide-eyed enthusiasm.

“She wrote a powerful business plan for me, presented my product and she did a great job.”

He had been selling Bliss at Granville Island Market when he met the owner of the IGA Marketplace on Robson St., who asked him to come in for a meeting. Udall, who had no sales experience, agreed to attend as the face of Ngomane’s brand. “They carry it to this day,” he laughs.

“I think David is an incredibly inspiring man,” beams Udall. “He has come out of this unimaginable hardship with such passion, sensitivity and ambition—all qualities that I really admire in a person, especially in someone who has had to cope with as much as he has. Knowing that he pours his heart and soul into making every batch makes it even more enjoyable.”

Ngomane has been marketing Bliss full-time for the past eight months, relying on word-of-mouth promotion and handshake deals. “I don’t have advertisements. I’m doing it my own way and I’m not in a rush. For now, I’m doing tastings and demonstrations. I have my bike, you know. I will ride around and do it the way we do it back home.”

Ngomane’s determination for his work-in-progress shows no sign of slowing. His current roster of products consists of three flavours of sauces—Strawberry/Banana, Banana/ Apple, and Strawberry/Apple, each available in four levels of heat—and he plans on marketing a new secret recipe of salad dressing in the New Year.

“I do not have any financial support so basically I’m on my own, but with faith, I believe I shall prevail,” Ngomane declares. “It takes time to build a business. You can’t look up in the sky and expect miracles; you’ve gotta do the job. The only person who can stop me is myself. I’ve been through a lot of hardship in my life, but I don’t believe in surrender.

“Mentality,” he says before pausing and smiling, “is everything.”

For more information or to order online, visit BlissHotSauce.ca