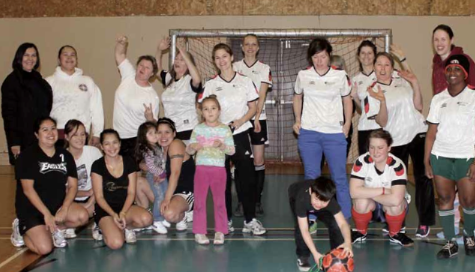 Last September, a local soccer team made up of homeless and previously homeless men played their way to Rio de Janeiro, Brazil. It was the prototypical underdog story: their participation in the 2010 Homeless World Cup was the culmination of many months of work creating a soccer program where there wasn’t one before, and recruiting and training players to get to the level required for international competition.

It was more than worth it though, as the team returned home proudly sporting the tournament’s Fair Play Award. “Rio was an amazing experience for everyone involved,” says Sarah Blyth, one of the organizers and volunteers behind Portland FC, a street soccer team in Vancouver whose players partly made up the national squad.

Since then, the street soccer movement has grown in the city. The excitement behind the team’s participation has led to more players, more teams and more games. Practices that were once held weekly have doubled, as coaches and players now meet every Thursday (at Andy Livingstone Park in Chinatown) and Sunday (at Creekside Community Centre). There is a palpable excitement in the practices, and the players who participated in Rio are happy to mentor newcomers.

However, for Blyth and Kailin See—both support staff at New Fountain Shelter where the Portland FC team originated—there was a huge gap in who they were reaching and supporting with the street soccer program.

“There were no women from Vancouver playing in Brazil,” says See. “When we saw what teams from other countries were doing with their women’s street soccer program, we were inspired to bring that home.”

And so they started recruiting, canvassing the various women’s centres and shelters in the Downtown Eastside to try to get players out to practices. A key part of the recruitment process was understanding that in order to get women interested in participating, they needed to offer something different from the men.

“We’d had a few women come out to practice [before], but they rarely seemed to become regulars like the men,” says Blyth. “Life is hard on the streets for everyone, but in many ways women have their own set of challenges and needs that are unique from men. Part of what we’re doing is trying to meet those needs.”

That has meant focusing on the social aspect of the game, providing a supportive community, a safe haven and food and drinks for every practice. They also separate the men’s and women’s teams during practices and have a female-only coaching staff so that new players are more comfortable and less overwhelmed.

And it’s been working. On the day I attend their practice, there are a dozen players and volunteers on the women’s side of the gym. They practice and laugh with each other genially.

One player named Erin had been participating for a little over a month. She sits on the bench beside me, and proudly laces up a pair of new Puma indoor trainers, shoes she says were donated to the team. She then rushes off to join her teammates in drills.

While the men engage in loud and robust drills (their thunderous kicks sound throughout the entire space), the women go about their practice more quietly. There was a clear focus on instruction and mechanics, like simple drills on passing and receiving a pass. Many of the players here have never really played soccer before, or even participated in organized sports. As a result, the atmosphere is intentionally positive and supportive, and the volunteers spend a lot of time on one-on-one instruction.

“We’re trying to break the game down to its simplest of forms so that everyone can succeed,” explains Simone Aardema, who has volunteered as a coach since the beginning of the New Year. “It’s important to get the basics down. We focus in on the positive, because sometimes this game can be very challenging.

“In a very short period of time, I’ve seen incredible improvement, especially in the ones that are absolute beginners.”

It’s an approach that Paula Armstrong certainly appreciates. At 54 years old, she is older than most of the other players. But she is bubbly and exuberant, clearly excited to be playing regularly. Armstrong, a resident at the Rainier Hotel, spoke about how she’d quit crack and has now been sober for over six months, and the role soccer has played in her recovery.

“It’s the activity and the camaraderie,” she says. “I wouldn’t be able to motivate myself on my own, but with these other women, there’s a support group.

“When you’re trying to change your life, something like this really helps. It helps you focus your mind and your body, and keep positive. And it’s led to these great relationships.”

Armstrong races off to the far end of the gym to practice on her own after the other players have left. She says she’s tired from the scrimmage and drills, yet continues to kick the ball into an open net long after most others have left.

The women’s team now has a name separate from the men’s—the Portland Phoenix—and new red and black jerseys to go with it. For See, the name has special meaning to the women, and captures the inspiration she herself felt from watching the other women’s squads in Brazil. “It’s about redemption, about rising up again,” she says.

And with their new name and new uniforms, they also have a specific goal in mind—to play in the Homeless World Cup in Paris later this year. For these women, soccer is a kick start to dreaming big.