join us donate
LOG IN or SIGN UP
Liquid syntax error: Error in tag 'subpage' - No such page slug join
find a vendor
February 18, 2013 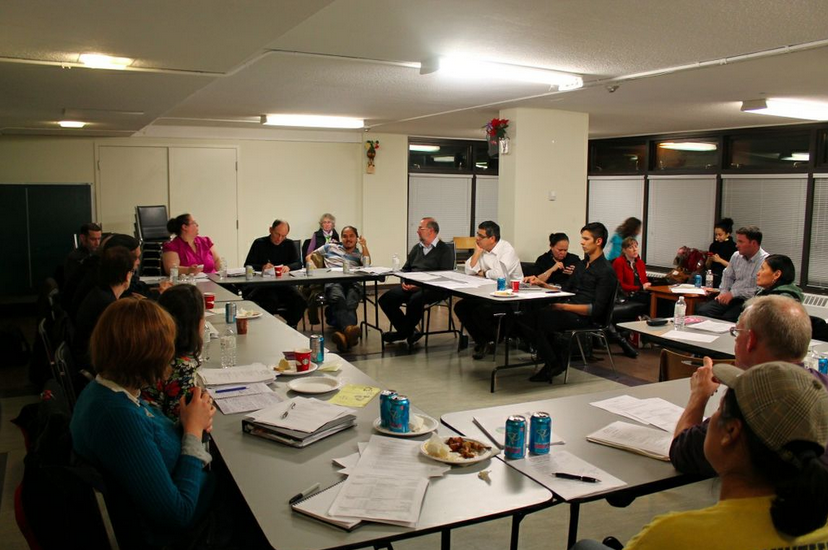 There has been no shortage of revitalization plans produced for the Downtown Eastside (DTES) in the last 20 years. Some estimate at least 30 different plans have materialized. Yet quality of life for residents has continued to decline as dilapidated hotels and empty storefronts are replaced with high-priced condos and luxury stores, with no singular vision in place for the neighbourhood’s future.

While dozens of plans have amounted to little, local residents, businesses and the City of Vancouver hope one more plan can finally turn the neighbourhood’s fortunes. Now in its third and final year, the DTES Local Area Planning Process (LAPP) has brought these groups together with anti-poverty activists and service providers to create a plan to fix the neighbourhood, and also map out a more prosperous future for all involved.

Where other plans focused solely on short-term goals or solving one issue like housing, Michael Clague, director of the Building Community Society and a LAPP committee member, says this plan is all-encompassing. “Our interest isn’t just in the housing, it’s when you come out of the front door, what’s your neighbourhood going to be?” he told Megaphone.

The LAPP is co-chaired by Clague and Herb Varley of the Downtown Eastside Neighbourhood Council (DNC). The DNC is a grassroots organization composed of low-income DTES residents. The LAPP committee has met regularly for the past two years to create a plan for a healthy population, economy and community in the DTES.

Scheduled to hand their final document to the city in November 2013, the process has been lengthy, but what it will produce is unclear. Committee meetings have been tense, with clashes between activists, businesses, residents and services providers over what’s best for the area.

While no one doubts the LAPP will be finished, some wonder if it will do more than collect dust at city hall. “The question is whether it’s going to be a good plan,” said Scott Clark, executive director of Aboriginal Life in Vancouver Enhancement Society (ALIVE) and LAPP committee member.

“That’s what we’re worried about right now because a lot of the key people that should be at the table are not at the table, and as long as a small group of people are dominating these tables, then we’re all going to lose out.”

When the city named the DNC co-chair in January 2011, the low-income group spent eight months negotiating a terms of reference with city manager Penny Ballem to ensure people living in poverty would be represented fairly.

“Then we invited people to the table who were willing to work with that terms of reference—and some probably just came even though they didn’t agree with it,” said Wendy Pedersen, who was the DNC co-chair on the LAPP until she took sick leave last August.

Outside of the committee, there are four LAPP roundtables made up of community members, stakeholders and local government. Meetings are held outside of the regular monthly LAPP committee meetings, and participants brainstorm for solutions on four key areas: housing and homelessness, social issues and urban health, land use and built form, and the local economy. Their ideas are then returned to the LAPP committee for implementation into the final plan.

Megaphone requested an interview with the City of Vancouver on LAPP, but they could not meet our deadline. If you ask the DNC, however, this LAPP isn’t like other local area planning processes in Vancouver.

“The history of LAPPs are a few members of a development team for a community meet with some developers and a few BIAs, they have a few meetings, and then that’s a LAPP,” said Tami Starlight, co-founder of the DNC and a low-income representative on the LAPP committee.

“So the one that we’re doing, it is unprecedented.”

The terms of reference created by the DNC have caused some tensions on the LAPP, however. Wes Regan, who represents the Hastings Crossing BIA on the LAPP committee, says he believes low-income people should benefit the most from the plan. But he says the LAPP can’t forget the thousands of other people and businesses that call the DTES home.

“I find sometimes when we bring up a point that’s important in regards to businesses, we’re told that we’re not thinking about the plan in the context of low-income residents,” Regan told Megaphone.

“I think that’s unfair because the dialogue has been very robust, frank and open between businesses and the low-income residents and other representatives on that committee in a way that I don’t think this neighbourhood has quite ever seen.”

It isn’t just business organizations that raise this issue, either. ALIVE, which represents over 800 urban Aboriginal people living in Vancouver, believes the terms of reference are furthering the agenda of the DNC and the Carnegie Community Action Project (CCAP), another organization with a LAPP seat.

“The whole strategy that the city has in place and CCAP hangs onto is revitalization without displacement,” said Clark. “[But] go talk to the people on the streets. At least 50 per cent of them don’t want to be in the Downtown Eastside, they want to move out of there, they want to be in a safe place: the elders, the young families, the young people, they want to be in safe, secure places. So there’s a lot of politicking going on that doesn’t really reflect the broader community.”

But Starlight says views like that are “so offensive, so ridiculous, so old.”

“Because they don’t like the terms of reference being low-income, so once again they’re just like business people, and they have this classist philosophy about people in our community that we’re all drug users and we’re all criminals and mental health people,” she told Megaphone. “They equate being safe with people with money showing up in our neighbourhood with their fancy stores and their million-dollar condos.”

A place-based strategy involves grassroots organizations working with all levels of government and business to provide support for community revitalization that focuses on the needs of that particular community. For example, when other LAPP members were protesting the rezoning of 955 E Hastings for light industrial and condo development, Our Place members like Clark were arguing it should be seen as an opportunity for employment and housing for local residents.

Our Place has collaborated with the Vancouver Board of Trade to create the Downtown Eastside Economic Initiative, a coalition composed of LAPP members like ALIVE and the Strathcona, Chinatown, Hastings Crossing and Gastown BIAs, as well as employment services like EMBERS and Mission Possible, to focus on what they see as realistic solutions to the neighbourhood’s problems.

Bob Laurie, chair of the Board of Trade’s Community Affairs Committee, says the LAPP isn’t realistic because views of the majority of members “defy the fiscal laws of gravity because they expect society to throw whatever amount of money is necessary at this neighbourhood to elevate the standard of living of the community.”

Although the Board of Trade is acting as a conduit for the ideas and not a decision maker, Laurie says he will bring the Initiative’s plans to the Board’s policy council later this month for their endorsement. Both he and Clark hope to hand the city the Initiative’s economic strategy for the DTES later this year as another document to consider when making a plan for the neighbourhood.

Hopes for the neighbourhoods

Hendrik Hoekema, chair of the Downtown Eastside Economic Initiative and a LAPP committee member, initially shared concerns about a lack of progress on economic issues on the LAPP.

But he says it has improved, and he’s encouraged by some of the ideas coming out of the committee for the neighbourhood, particularly having separate economic and housing zones for different DTES neighbourhoods.

“What I like to see is the same kind of structure as the agricultural land reserve set up 30 years ago under the NDP, where there’s control over the renting and the uses of the land,” he told Megaphone, saying an example is the Oppenheimer Park area, which requires 20 per cent of all new housing developments to be social housing.

“We could also ask for more (social housing) in particular areas. One of the issues that we have is that there are actually six neighbourhoods in this large community of the Downtown Eastside, and they are not all the same in terms of their needs or their populations, their industry or their economies. They can’t be treated as a whole.”

Regan would like to see new businesses continuing to come into the DTES, but a mix that provides opportunities for work and commerce for low-income residents as well as their more affluent neighbours.

“My hope is that it won’t fall short of the potential for innovation that I know we have,” he said, referring to the whole LAPP committee. “We want new solutions. We’ve seen the old things not working.”

For Starlight, though, her dream for the future of her home can be boiled down to stopping the “bleeding” of residents from the DTES.

“I would like to see those who wish to stay in this community, that they can stay here and have an affordable, low-income life that they have, and that they don’t need to move out,” she said.

Many LAPP members acknowledge there’s an elephant in the room: implementation. Several, including Regan, Clague and Starlight, are advocating for the creation of an implementation committee composed of LAPP members and city staff to monitor the LAPP’s progress after city approval.

It’s unclear whether the city has the resources for remaking the DTES in the LAPP’s image, let alone establishing an ongoing implementation monitoring mechanism. Whatever happens, most LAPP members recognize what the city has been saying about revitalization for a long time: we need help from other levels of government.

“I don’t think anyone’s under any illusion that this can be solved without the support of funding from the two senior governments,” Clague said.

“But the Downtown Eastside people are fighters, and they’ve had remarkable successes. That’s the strength and asset the city needs to build on. The situation is urgent, it’s extraordinary, and I believe we have to take extraordinary measures.”