join us donate
LOG IN or SIGN UP
Liquid syntax error: Error in tag 'subpage' - No such page slug join
find a vendor
October 16, 2019
by Paula Carlson follow this author
photos: Sue's mother told her the best way to get through life is to help people

Powerful elder heals by helping others 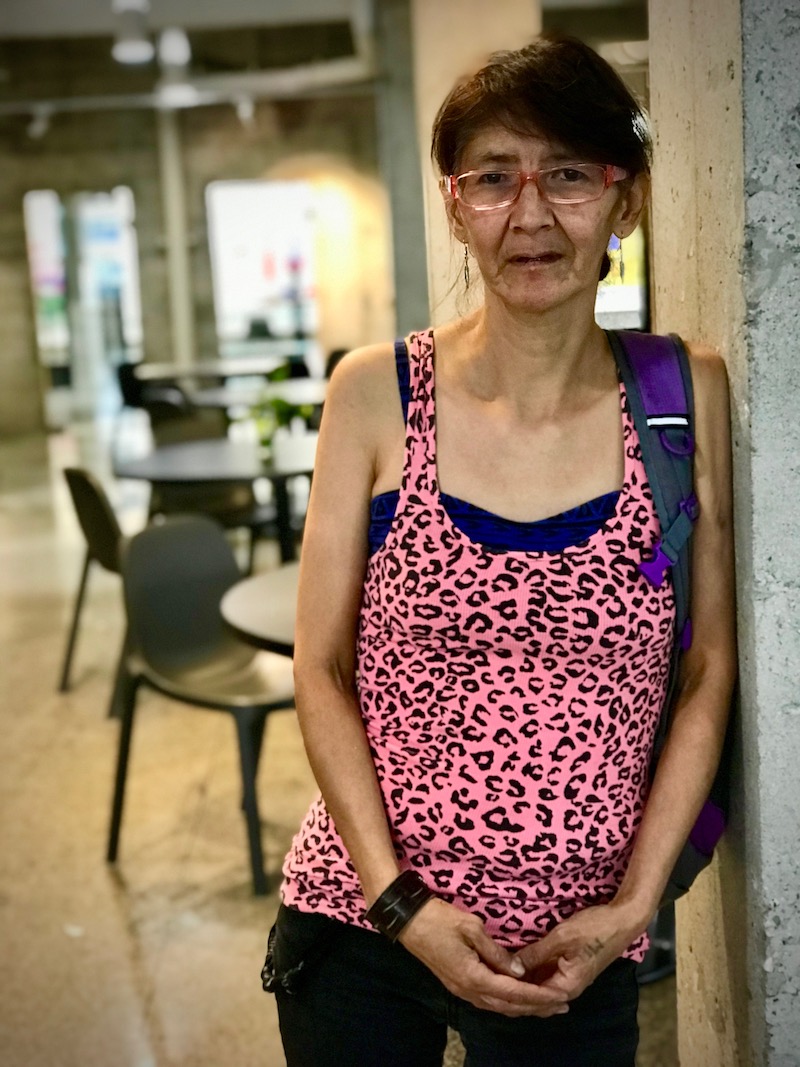 Sue has seen more than her share of tragedy, but the courageous Megaphone vendor finds strength in encouraging others.

Sue is a longtime Downtown Eastside resident who attended Strathcona Elementary as a child and remembers growing up in a neighbourhood where she and her mom would get free fish heads from fishermen to make bubbling pots of fish head soup.

Her father was from Red Lake, Minnesota and her mom was born in Powell River, B.C. Sue was born in Seattle and remembers coming back and forth to Vancouver by train until the Downtown Eastside (DTES) eventually became her permanent home.

Two years ago, a friend introduced her to the Megaphone community and Sue started selling Hope in Shadows calendars in Vancouver.

She’s known by many as a strong woman because while she may be physically diminutive, she shoulders a lot on her small frame.

The 50-year-old Tla’amin Nation (formerly Sliammon) woman has had more than her share of pain, losing nearly everyone dear to her to tragic circumstances.

The youngest in a family of eight sisters and four brothers, Sue and one other sister, along with one brother, are the only siblings still alive. Two sisters were lost to drug overdoses, a third to murder, and three of her brothers have died—one from drinking, another in a car accident and a third from tuberculosis.

Her father succumbed to alcoholism and her mother also perished in a car crash. Other deaths Sue has endured include her son’s father and her daughter’s twin sister. (Sue is a mom of two grown children, a son and a daughter, and has two granddaughters).

Seven years ago, her ex-partner took his own life—in the same year she found out she had cancer and  learned she was going to be a grandmother.

How does she cope with such deep loss?

“I’ve learned a lot,” Sue says. “Nowadays I go to school, I do a lot of schooling. I’ve taken Narcan training. I try to get educated as much as I can, to learn things and to help the people on the street so they can acknowledge that someone cares.

Sue is in good health now. Chemo knocked back the cancer and she battled her way back from substance use. She’s mastering traditional arts and enjoys other pastimes.

“I know how to make regalia [for powwow), I know how to tan hides, I make hand drums, I’ve learned beading, I make beaded earrings, I do macrame, I’ve done a one-pot cooking class.”

She also likes hiking, getting out in nature and playing tennis.

“Oh gosh, I used to be good at tennis,” she says laughing, “back in the day.”

“My girlfriend used to pay me to write love poems to her boyfriend,” she confides.

Having good friends and being around positive people are the keys to getting through tough times, says  Sue, who serves as a powerful elder in her community, encouraging others during their own challenges.

“It took me a long time to get where I am now. As I’m getting older, I’m starting to understand myself more,” she says.

Sue believes that if the public knew more about the personal stories of Downtown Eastside residents, they might have more compassion for the hardships they face.

“We would understand more about each other.”

She says what she likes most about selling Megaphone are the conversations she has with her customers.

“I joke around with them and stuff. But I also like to help them educate themselves about the people down here, instead of just snubbing their noses at us. My stars, it gets me so irritated when people roll their eyes at us.”.

Sue A. sells Megaphone and Hope in Shadows near SFU Woodward’s at Abbott and West Hastings Streets. Paula Carlson photo.