join us donate
LOG IN or SIGN UP
Liquid syntax error: Error in tag 'subpage' - No such page slug join
find a vendor
September 30, 2011

Raising the Roof, Raising Questions: BC Place Stadium renovations and the cost to taxpayers 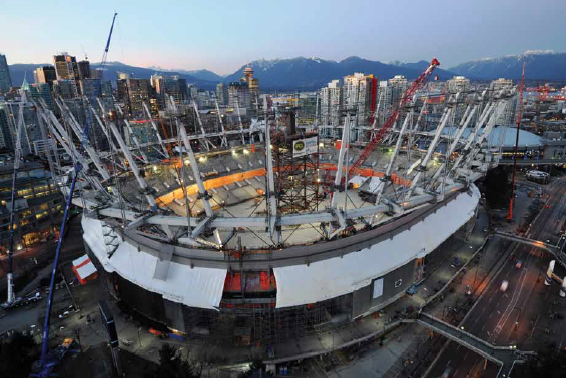 BC Place Stadium under renovations. Photo by BC Gov Photos.

The dream scenario probably goes something like this: it’s November, and the B.C. Lions are in the 99th Grey Cup. After weeklong festivities leading up to the sold-out game bring thousands of fans from across the country and millions of dollars to local businesses, the hometown Leos come from behind to win the game on a last-second field goal by local boy Paul MacCallum (did I mention this was also a farfetched scenario?).

Such a scenario would be an auspicious coming out party for the newly refurbished Telus (the corporate entity rumoured to have secured naming rights) B.C. Place Stadium. Government officials and corporate sponsors would celebrate in congratulatory backslapping as contented fans filed out of the stadium.

Once the cheers fade into silence, however, British Columbians will be left holding yet another hefty bill for a big sports event.

The province has spent $563 million on the B.C. Place makeover, installing a new landscape-altering roof and refurbishing the stadium. It’ll be the new home to the Lions and the Vancouver Whitecaps (the stadium renovations were key to Vancouver landing the MLS expansion franchise). Supporters say the investment will pay huge dividends for the surrounding neighbourhood and the region in general. But where the dollars to pay for the project are coming from remains an unanswered question.

There has been a push to fill the remaining undeveloped space surrounding the stadium with a casino, hotels and restaurants, with the profits from the casino going towards the stadium debt a proposal already rejected by the current city council earlier this year, but likely to be revisited.

As Megaphone wrote in these pages before, any form of a mega casino would become another (neon) example of an absurd kind of corporate welfare.

Rather than have the hundreds of millions of dollars generated flow toward social infrastructure—be it affordable housing, education, health care or arts and culture—the dollars generated on the back of citizens will go towards paying off a stadium roof for, primarily, a pair of professional sports teams.

Funding sports franchises and event are, by and large, a failed model. Evidence lies south of the border where cities and states have bankrupted themselves in the name of building new private stadiums without a public ownership stake and we’ve seen it with our own Athlete’s Village development.

While the B.C. Liberal government has happily claimed the legacy of the project will be the 8,500 direct and indirect jobs created during construction and operations, most of these jobs will be temporary. Studies of stadium construction in other cities have show that the resulting jobs created in the neighbourhoods surrounding new stadiums are invariably poverty wage affairs—low paying, mostly seasonal positions that offer little upward mobility and no constructive job skills development.

It’s worth considering, as well, that renovations to B.C. Place were supposed to cost $365 million, according to a government announcement in January 2009. Now we know the actual cost will be (at least) $563 million. That’s more than 50 per cent over budget, but the provincial government keeps repeating the refrain of “on budget and on time.” There has been no explanation given regarding the change in cost or budgeting. And despite the nearly $200 million overrun and a funding plan shrouded in artifice and ambiguity, local media outlets repeat the ‘on budget’ line without questioning the facts.

But why ask questions when there are gushing reviews to be written? A recent article in The Province offered a glowing review of the stadium, all while pushing aside questions about the cost. Not that readers should have been surprised: The Province’s sales can be tied to the

Editorial content is an example of how sports franchises hold a unique place in our society.

Teams are operated as private, corporate entities driven by growth and profit margins, but there is an unusual civic bond between the business and the community. Citizens feel particularly invested in the team (read: business) and its success. While there may be civic pride for local

businesses like EA Sports and Lululemon, no one is rioting when a purchase for off-brand yoga pants is made.

Which brings us (inevitably, when talking about sports in this city) to last June’s Stanley

Cup riot. In addition to being a black eye on the city, the riot raised a lot of questions not just about bureaucratic responsibility, but corporate responsibility. The Vancouver Canucks, a privately held entity, were the direct beneficiary of millions of public dollars promoting interest in their product. It was, in effect, a publicly financed marketing campaign.

In the end, their product contributed to the riot that led to millions more dollars in damage. Yet the organization has made no offer to assist those small businesses impacted by the fans of their business, nor have they offered much in the way of comment (expect a PSA before games this season, though).

Whether the Canucks franchise should be in anyway held accountable for what happened on the streets of Vancouver is entirely debatable. But it does raise questions about public-private relationships when it comes to professional sports.

So the question remains: how should we approach investing public dollars on professional sports? Ultimately, no sports analogy is needed: we’re spending our money on the wrong things.