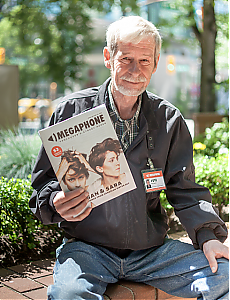 Ray Soucy’s gentle, neighbourly warmth is a breath of fresh air amidst the hustle of the downtown financial district where he works every day.

Bright, articulate, and friendly, Ray’s eclectic work history has taken him inside of some of the office buildings that surround him where he sells Megaphone at Burrard and Hastings. But his most steady work through 19 years of living in Vancouver has consisted of selling street newspapers.

Ray is one of the most longstanding street paper vendors, having sold every incarnation of Vancouver’s street paper since Spare Change was founded a year before he moved to this city from Edmonton in 1993.

Selling street papers helped Ray out of a dark period in his life. “I wasn’t doing very well. I was picking cans out of the garbage to make a few extra bucks,” he recalls of his first months in Vancouver. He was living in the Columbia Hotel in the Downtown Eastside at the time, and he would walk up to Granville Street to collect bottles and cans. He passed the same man selling Spare Change at Georgia and Granville for several weeks.

“He was selling papers like gangbusters down there,” Ray remembers. “Finally I walked by him and he kind of stopped me. He says, ‘You know, you would make a lot more money if you were selling papers than picking cans.’” The vendor took Ray to the Spare Change office and helped set him up with his first batch of papers. His new job took off from there.

Ray is a popular guy among the people who regularly pass his corner on the way to the office. He gets a kick out of the high-profile personalities who have purchased papers from him over the years.

“I've done a lot of things to make money. And one thing about selling the street paper is you're treated with a considerable amount of respect,” he says. “Further to that, I’ve met people I would have never met otherwise, who are some of the nicest people in the world.”