join us donate
LOG IN or SIGN UP
Liquid syntax error: Error in tag 'subpage' - No such page slug join
find a vendor
November 17, 2010 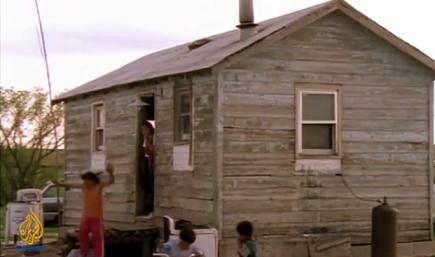 The latest installment in Al Jazeera's series of award-winning Witness documentaries takes viewers into the American Heartland for an eye-opening look into the catastrophic legacy of Manifest Destiny.

We are able to peer into the daily lives of residents, lives marked by monotony and dejection but also by a sort of unwavering faith that the future will be better for their children and that something will be done because, simply, something must be done.

Housing is a major theme in this feature. The residents of the Pine Ridge Indian Reservation 'own' land in theory but not in practice: they have the right to use, but not to act as owners. The land is held in trust by the federal government, so it is impossible to take out a mortgage and exploit the value of the land.

The result is countless families of six-, seven-, eight-plus people living in rundown government-issue shacks. Equally devastating is the distinct lack of legitimate jobs, leaving very little to do for the residents who often turn to substance abuse as a way to mitigate the crippling boredom.

So what to do, then? What solutions exist for the seemingly insurmountable problems facing this community?

"Drop a bomb here on the rez," jokes local artist and father Thurman Horse, whose dark sense of humour shines through but highlights the frustration of his forsaken community. "Watch it burn... I don't know what to tell you."

Fortunately, the film does touch on small-scale housing solutions for these people who don't own land, and can't afford to build on what they do 'have'. We see the efforts, for example, of Walking Shield, an organization mandated to provide housing and health care to American Indians, which delivers a ready-made US Air Force home to the Little Boy family.

It's a touching moment, though more than anything it serves to underscore the limitless need that exists at Pine Ridge and in unjustly marginalized aboriginal communities all over the world. And it offers hope that more will be done to help, because, indeed, it must.