join us donate
LOG IN or SIGN UP
Liquid syntax error: Error in tag 'subpage' - No such page slug join
find a vendor
August 16, 2017

Megaphone News: Vancouver vendor Ronald Jerome McGrath passed away on July 16, and we honour his memory

Every year as February rolled around, Ron McGrath would make a special point to come to the Megaphone office. He didn’t much like coming inside, even in the worst weather, so he’d knock on the door and wave through the window. Blue Megaphone raincoat, red toque, white beard, cigarette in hand, cart of magazines in tow. I’d come out front and lean on the concrete ledge to talk with him for a few minutes.

Ron would dig through his bag and hand me a few looseleaf pages lined with his unmistakable scrawl. “This one is perfect for February,” he’d say, tapping the page.

“Gotta wish everybody a Happy Valentine’s Day! Make sure you put more hearts on it this time, though. Maybe some cupids. There weren’t enough of those last year.”

It was his semi-annual Valentine’s Day poem, one of many published pieces as a prolific writer, and a favourite of his. Ron was the champion of underappreciated holidays: Valentine’s Day and Mother’s Day being tops. Any chance to talk about love, to celebrate gratitude—he was all over it.

Ron loved love, hugs, community, the environment. He had a seething distaste for hypocrisy and falsehood. He was stubborn, with very, very specific ideas and plans. Ron had a vision, and if you didn’t put enough hearts on his Valentine’s Day poem magazine spread, you’d better believe you’d hear about it. Even down to how we should act after he passed away, Ron had a plan. “It’s a celebration. Call it, ‘I Am Alive, We Are Alive.’ Make sure you celebrate. It’s not a funeral,” he told me, a few weeks before he died.

He had an incredible way of inviting strangers into his life, of pulling you on board and assigning you a role on his team before you realized you’d been drafted. At Ron’s celebration I spoke with John, who had found himself on the Board of Ron’s fledgling society, formed to support housing options for people with environmental sensitivities. I met Monica, the musician who Ron befriended and whose music served as fodder and inspiration for several written reviews.

And Sean, the illustrator whose work appears on pg. 3, who had been sought out by Ron after appearing in Megaphone and soon found himself in schemes to illustrate Ron’s long-planned book. I met Donna, a customer who found herself his “editor” in Ron’s last months of life as she spent time with him to record video so his messages could carry on.

Ron had a unique combination of stubborn determination and lighthearted whimsy. And he was full of surprises, too, like a secret talent for baseball he revealed as a ringer in a Megaphone vs. CiTR Radio matchup in Megaphone’s early days, before refusing to ever play again.

Ronald Jerome McGrath grew up in St. John’s, Newfoundland, son to Violet and Gord, and brother to 11 siblings: 6 sisters and 5 brothers. He leaves behind 100 extended family members, from siblings to spouses, to nieces, nephews, grandnieces and grandnephews. Two of his sisters, Mary-Lou and Alicia, shared memories at his celebration of their dear Ronnie growing up. They spoke of a scary childhood time when 10-year-old Ronnie got lost in the forest near Cappahayden, Newfoundland. He was gone for three nights and four days while search parties scoured for him. Ever resourceful, when a volunteer searcher found Ron, he said he’d eaten a lot of blueberries and climbed a tree to sleep.

After a youth on the East Coast, Ron came out west to work on the railway, which he did for more than 15 years.

His health issues with fibromyalgia and aggravated environmental allergies caught up with him after years on the job, and he was unable to continue his work. He came to Vancouver, and lived intermittently with his sisters and parents back east and in Alberta, helping out and spending time with beloved nieces and nephews.

Ron joined Megaphone as a vendor in the fall of 2009, after meeting then director Sean Condon. He took to it right away. The flexibility and community were just what he was looking for: a chance to earn what he needed to survive, set his own hours, and be independent—but also to connect with people and build community. With his determination, resourcefulness, and love of people, he stepped fully into his role as a vendor.

He sold Megaphone in Vancouver, gaining loyal customers outside of Choices Market on West 16th Avenue at Trafalgar, and outside of Royal Bank on West Broadway at Cambie.

Ron was homeless for about seven years. He often talked about the frustration of it, what he believed a peaceful home could mean for someone’s well-being, and how we all deserved that. When he was able to get into housing after years on the streets and in shelters, he didn’t stop his advocacy. He was passionate about ending homelessness, specifically about finding housing options for people for whom traditional supportive housing or shelters don’t work.

Ron lived his values. He built community through the daily rituals of hellos and how-are-yous on his corner. He was an important person in his community, and his friendship and presence helped many people see the humanity in homelessness.

In this, in his commitment to and love for community and his unwavering dedication to ending homelessness and creating a better world for all of us, he embodied what Megaphone stands for.

Ron passed away peacefully the morning of Sunday, July 16, 2017 after a long fight with pancreatic cancer.

He had been out selling magazines in his regular 16th Avenue spot just two days prior. He will be remembered, and celebrated, for the creative, poetic, stubborn, mischievous, mystical, loving, and determined man he was. 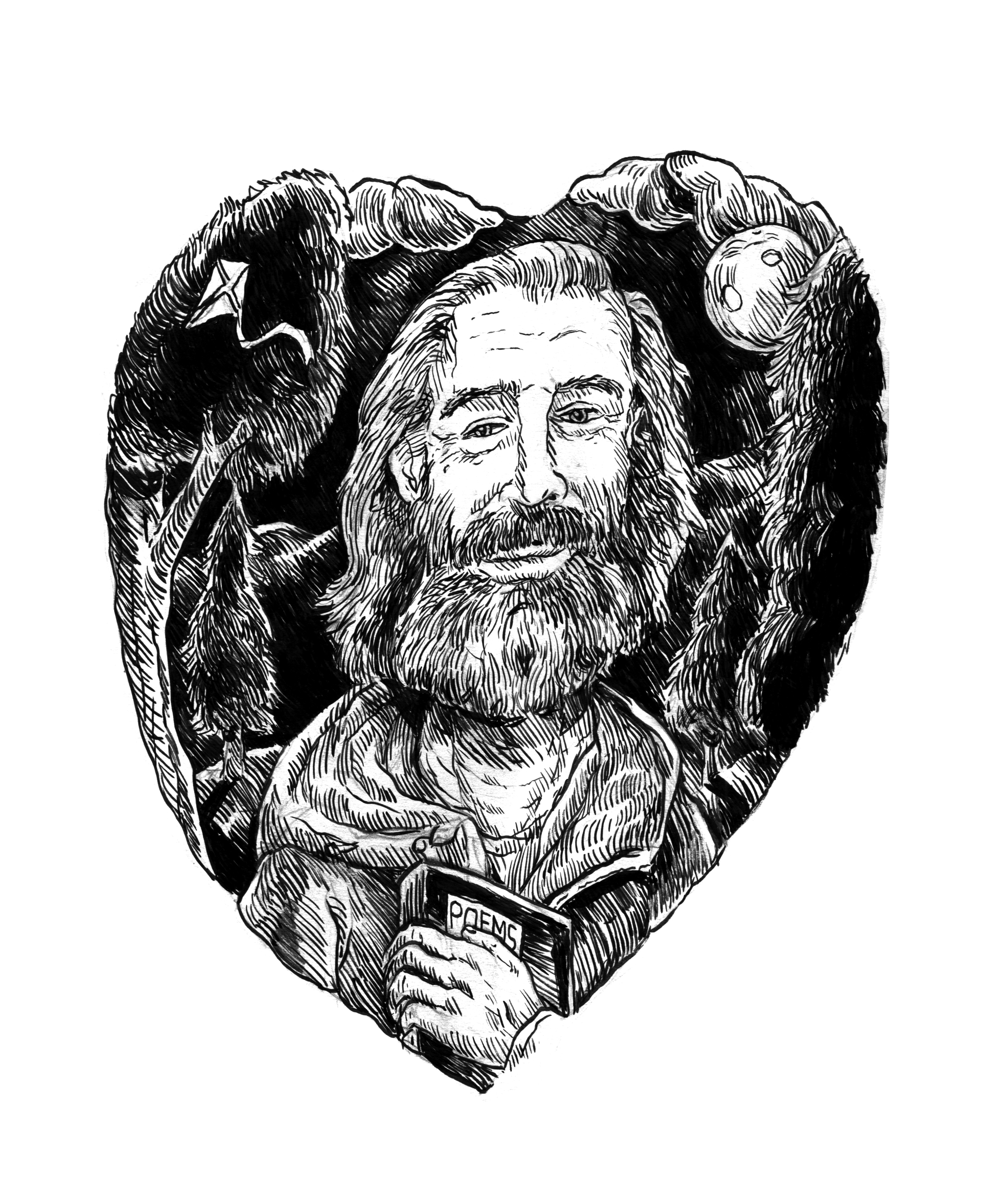 Thinking of you
The decision we make
Between a good life
And bad.

Sometimes we have no choice
It’s then we must let go
Let God.

Trust we are all in good hands
Hands that cleanse all
Our thoughts, our fears.

As I am thinking of you.

Drawing of Ron courtesy of his friend, artist Sean Karemaker.