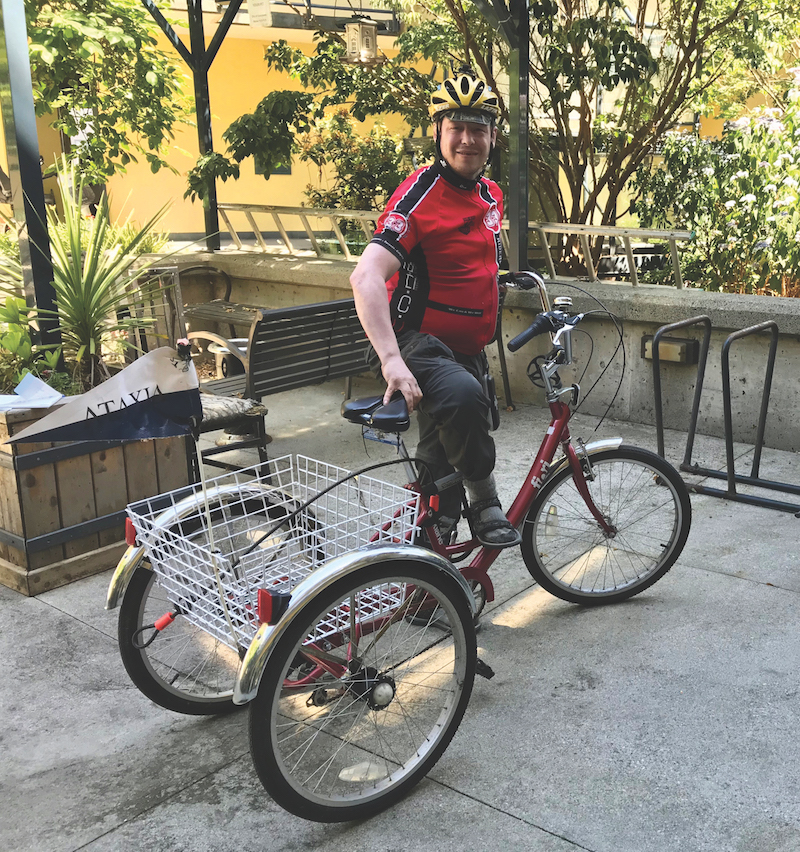 Megaphone vendor and Ride to Conquer Cancer team member Michael Geilen doesn't worry about his own challenges — he's too busy helping others.

Michael Geilen always arrives at the Megaphone office with a big grin and a great attitude. In fact, it’s his indefatigable spirit that stands out the most upon meeting Michael—long before you might notice some other things about him.

He walks with a limp and speaks with a slight slur—the result of having ataxia, a degenerative neurological disease that affects people’s ability to walk, talk and use fine motor skills. For Michael, the condition causes hand tremors, difficulty speaking and trouble keeping his balance.

Because of his slow speech and off-balance gait, many people falsely believe Michael has a cognitive impairment.

“It’s annoying, but it can be advantageous,” he says with a mischievous smile.

Ataxia can be hereditary or, as in Michael's case, acquired.

“My stepfather used to physically abuse me,” he says, “and at age 18, he buggered up my neck.”

But he’s quick to point out he’s no victim.

“You know, everything that has happened to me up to this point has made me who I am,” says Michael, 48, who adds that he has long come to terms with his situation and has forgiven his stepdad, who died in 2001.

“If you hold a grudge, you just weigh yourself down and get into a negative emotional state,” he says.

So instead, Michael, who is a Megaphone vendor in Vancouver, has decided to lift others up.

Since 2009, he has participated in the annual Ride to Conquer Cancer—a two-day, 200-kilometre cycle trek that raises money for cancer research and care through the BC Cancer Foundation. In 10 years, the event has brought in more than $96 million, making it B.C.’s largest cancer fundraiser.

The BC Cancer Foundation is the fundraising partner of BC Cancer and the largest funder of cancer research in the province. The Ride to Conquer Cancer is Canada’s biggest peer-to-peer fundraising event, with most participants riding in honour of friends and loved ones who have been impacted by cancer.

Michael is part of the number two team in the province—Riders for Ryders—which so far this year has raised more than $174,000 for cancer research towards a goal of $533,333. (The team is currently running a close second to Polygon Homes). Since 2009, Riders for Ryders has brought in $3.5 million in donations. 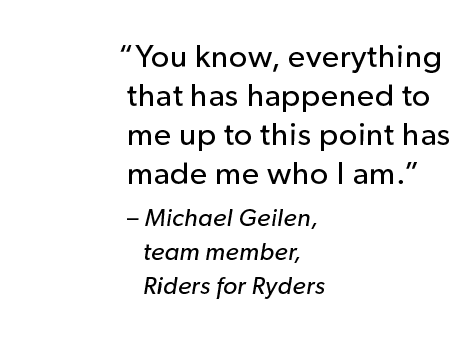 Team members, including Geilen, sport the number 33—a double digit on a parking stall that used to make Brockett’s son Ryder giggle.

Michael, too, is riding for those he cares about.

“I decided to be involved with this great event to help my friends who have cancer and in memory of those who've passed away because of this horrible disease,” he says.

This includes his grandfather Len McDerby, his uncle and one of his cousins, who all succumbed to the disease.

“And now I've found out that several of my neighbours have, or have had cancer, and I'm now also riding in memory of [Downtown Eastside advocate] Jim Green, whom my building is named after,” says Michael. “I’m also riding for the husband of a fellow Ataxian, Roger Charles Paillé.

Michael has been a relentless participant in the annual ride since 2009, despite his physical challenges, fundraising, equipment and weather-related obstacles, and the theft of his special trike in 2018.

“I train every week by riding to do a grocery run with 40 half-litre bottles of water,” Michael says. “I can handle the weight. I’ve just got to get the distance.”

This year so far, he’s raised $1,632 of a $3,333 goal for the ride, which takes place Aug. 24-25 along a route that runs from Cloverdale to Hope. You can visit his fundraising page at conquercancer.ca/goto/michaelgeilen2019.

And if you happen to see Michael with a newly shorn scalp instead of his usual longer locks, that’s because he’s a regular donor to Wigs for Kids, which provides wigs to children who have lost their own hair as a result of cancer treatment.

Michael Geilen is a Vancouver vendor who sells Megaphone in the Downtown Eastside.