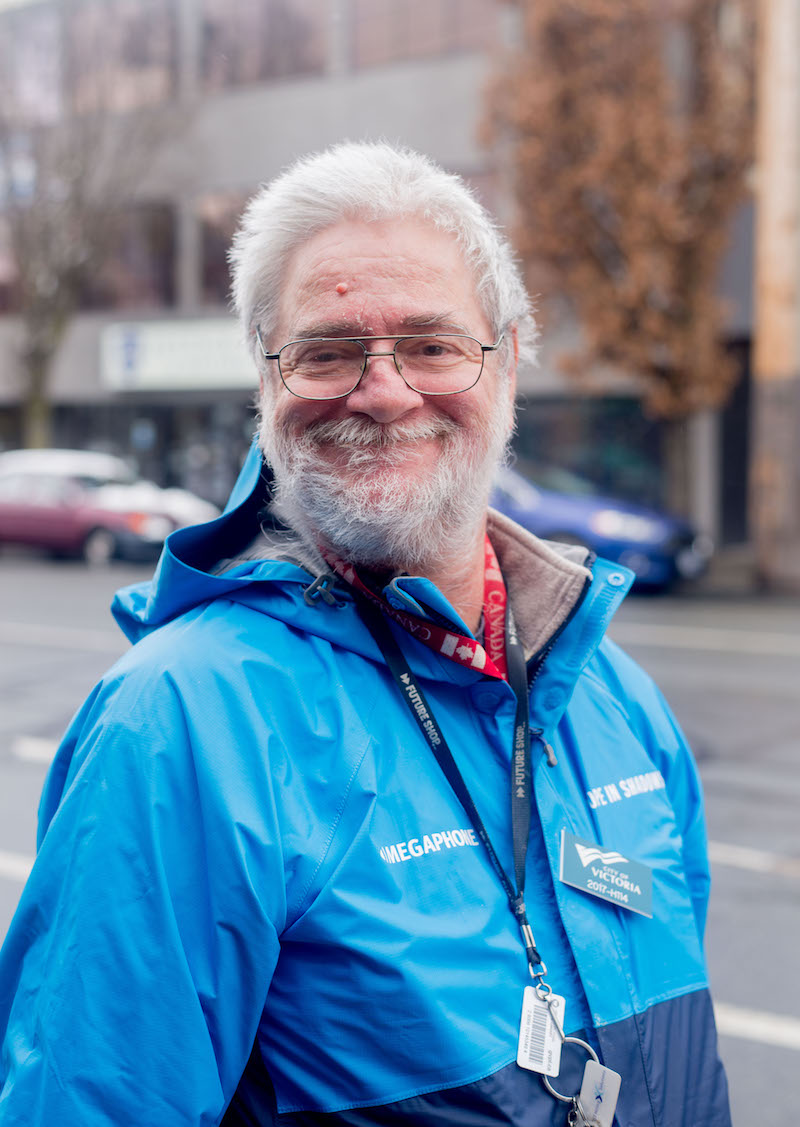 Richard Gerrand has been selling street newspapers for a dozen years.

Richard Gerrand likes to gather his thoughts before he speaks. The easygoing Victoria Megaphone vendor always lets a pause hang in the air following a question as he considers his response.

“I like to make things,” he says slowly after being asked how he spends his time when he’s not selling Megaphone.

“I attend a program in Esquimalt and I’ve just made a mobile made out of beads and wood. And a rainbow.”

Creating arts-and-crafts projects is one of Gerrand’s hobbies, along with watching retro television sitcoms from the 1960s—in particular, The Andy Griffiths Show.

“It reminds me of times gone by,” he says. “I’m interested in history.”

Gerrand, 58, has lived in Victoria all his life. When the weather is nice, he enjoys going for walks.

Gerrand has been selling street papers in the city since 2007, when he worked as a vendor for Victoria’s Street Newz. When Megaphone expanded to replace Street Newz in 2014, Gerrand stayed on.

He can be found Saturdays at his regular spot outside the Bay Centre on Douglas Street, between Fort and View Streets.

The extra money he makes from Megaphone helps him buy healthy groceries and the occasional treat.

Gerrand invites customers to come by on Saturdays to say hello and learn more about Megaphone. He sells the monthly magazine and Voices of the Street literary edition, and says he even has a few 2019 Hope in Shadows calendars left. They are sold out everywhere else. (Watch for the 2020 calendar to hit the streets later this year).

Richard Gerrand sells Megaphone outside the Bay Centre in Victoria on the bench to the left of the main Douglas Street entrance, between Fort and View Streets. His usual hours are Saturdays between 10 a.m. and 1 p.m.