join us donate
LOG IN or SIGN UP
Liquid syntax error: Error in tag 'subpage' - No such page slug join
find a vendor
June 04, 2012 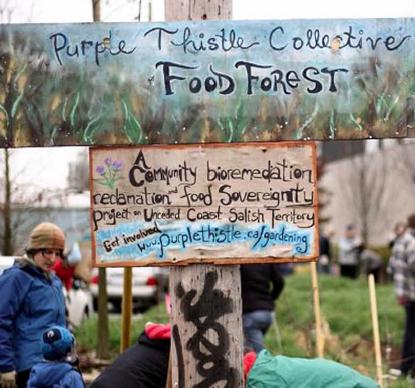 The Purple Thistle operates a community garden off Commercial Drive, just one model of urban farming that is addressing growing concerns about our food system. Photo courtesy of Purple Thistle.

Food security and sustainability are common conversation topics these days. While more people are beginning to  demand local and sustainable options for their food  choices, Kent Mullinix is preparing people to make  changes to the food system at large.

Mullinix is the director of a new program at Kwantlen  College that will give graduating students a Bachelor of  Applied Science in sustainable agriculture.

Making dramatic changes in our relationship with food  has become critical, according to Mullinix. He doesn’t  mince words on the subject: “There is recognition that  the human enterprise is unequivocally unsustainable,” he  says. “We are destroying the very basis of human  existence. And we know this.”

The program is unique in North America, but Mullinix  says that the need for programs like Kwantlen’s is  paramount, which is why interest for admission is  already high. It will give students the tools to invent  a truly sustainable food system. “It will focus on  right-sized agriculture. Appropriately configured  agriculture,” he says.

Starting in September 2012, the inaugural class will  participate in a mix of classroom learning and  fieldwork, and will graduate four years later with the  tools to take on opportunities as diverse as farming,  postproduction food management, community activism,  municipal planning or positions in any level of  government—but always with the goal to advance  sustainable food systems.

While those students are four years away from putting  theory into practice, there are already many people  active in the urban and sustainable farming movement.  Because the concept is relatively new, it is largely  wild terrain for people who are interested in forming  sustainable agriculture models. And here in Vancouver,  sustainable urban food production is taking some  interesting forms.

The people who have created the Purple Thistle community  gardens call themselves guerilla gardeners. Not long  ago, the three spaces they claimed, located in the  industrial area just east of Commercial Drive, were  underused, overgrown and covered in junk.

Now, these three plots support a food forest with 50  young fruit and nut trees, an area dedicated to food  medicine, vegetable plots, bee hives and a welcoming  space where anyone can come and take part in their own  food production.

Adam Huggins is one of two coordinators that provide  cohesion to the multi-faceted collective. Fittingly, he  likens the group’s structure to a flower. “Each of the  petals represents a different autonomous working group— plant medicine, food forest design, bee keeping, water  and irrigation, composting. 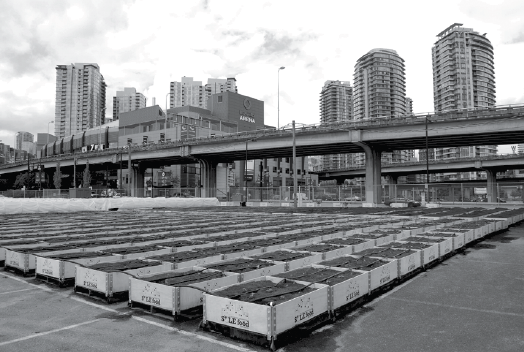 The SOLEfood farm sits in the shadows of downtown Vancouver. Photo by Kevin Hollett.

And at the centre of the flower, the flower’s  reproductive organs, are weekly work parties, a monthly  potluck, our harvest ceremony. This brings all these  autonomous groups together to celebrate and have a good  time.”

They began in 2010 and the city has since retroactively  recognized the plots as community gardens. But the  difference between these and traditional community  gardens is that one large plot (rather than many smaller  individual plots) means that the risk, commitment and  rewards are distributed amongst a group.

And that group is entirely inclusive, from the people  who work on it to people that just walk by and need or  want something to eat. There are no signs that claim the  food belongs to the people who work the land. “People  will harvest from the street and that is something that  we like,” Huggins says.

The gardens are juxtaposed against nearby the ports and  terminals that receive food from all over the world,  food that is inaccessible to many people. Huggins is  determined to help grant people access to food at a  community level. The collective is youth-focused and  youth-run but they mentor and welcome anyone who wants  to work or learn.

The guerilla gardeners took over the spaces, one of  which is a small section of surviving wetland habitat,  and began to work with the conditions that the earth was  already providing.

Ward Teulon had come back from harvesting at the  downtown rooftop garden he farms when we spoke on the  phone. He has six plots altogether, the rest are in  private backyards in the Kensington-Cedar Cottage area.  Later this day, Teulon will take his harvest and divide  it between the people that comprise his urban farming  collective.

It’s called community-supported agriculture. The model  has roots in Germany,Switzerland and Japan, from when  food imports and exports raised concerns about food  safety. When Teulon started urban farming in 2007,  calling himself City Farm Boy, he was one of the first  farmers in the city. Now, there are more than 20 such  farmers who run similar businesses.

Each member pays him $650 at the beginning of the season  and in return, they get a portion of Teulon’s weekly  harvest. It’s good value and high quality because it’s  harvested right before they get it, Teulon says. But the  real joy is because of the interactions between people.  “It’s all people from the community, my kids play with  their kids. We’re all neighbours for the most part so it  just seems to make sense.”

Teulon has used his expertise in the past to run  workshops and teach classes about urban farming and he  acknowledges that the movement is spreading. “I’ve  noticed it around the city, people are starting to grow  food more often,” he says. “There are lots of vegetables  being grown along the streets.”

At one point, Teulon had about 40 people who bought  shares in his business. He has scaled it back now, but  since more people are developing urban farms of all  different sizes, there are more people using services  like his.

There’s huge potential for people to grow their own food  and create networks within their own communities, he  says, and with some planning and effort, people can grow  surprising amounts of food. “Two years ago I grew 22  kilos of sugar snap peas in a raised bed along the side  of my house. Another year I grew about 150-200 cobs of  corn.”

He has built a solid community and is happy to see his  neighbours interact and get to know each other when they  come and pick up their weekly harvest. He knows he’ll  never become a millionaire on this path but he doesn’t  do it for the money. “I just love growing food. I can’t  help myself, so now, at least, I have somebody to eat it  all.”

If you are riding the SkyTrain heading west into  downtown Vancouver, you’ll be able to see one of  SOLEfood’s newest urban farming projects—a pop-up garden  at Pacific Boulevard and Carrall Street.

A giant asphalt lot with Rogers Arena looming in the  background seems an unlikely place for a garden,but the  people at SOLEfood have been setting up garden beds  equalling two acres of farmland and preparing them for  the growing season. 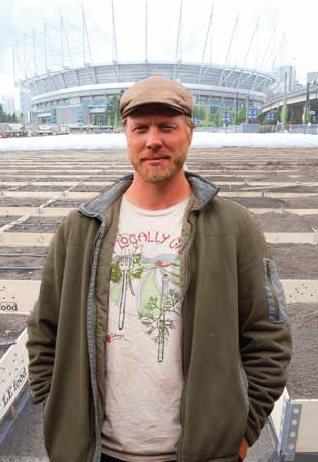 Seann Dory of SOLEfood stands in the newest farm plot being built next to Pacific Avenue. Photo by Kevin Hollett.

Seann Dory, co-director of SOLEfood, is tough to track  down, understandably so due to the size of the  undertaking. Dory says the farms (the first is operated  at Hawks Avenue and Hastings Street) began with a lot of  questions. “People talk about food security all the time  but what does that really mean? What does it really look  like? And how does it apply to our city and the Downtown  Eastside? Do people have access to food? To healthy  food? We are asking these questions with some  seriousness behind them,” he says.

While the most obvious end result of the gardens is  growing food, the gardens are actually run as employment  opportunities for people from the Downtown Eastside who  have difficulty entering the work force. The project is  an arm of United We Can, which also runs a bottle depot  with a similar employment strategy.

The harvested food is sold to high-end restaurants, at  farmers markets and through a partnership with Whole  Foods. The profits are then reinvested in the program to  expand and provide further opportunities to people from  the Downtown Eastside.

Vancouver is not ideal for these kinds of large-scale  urban farming projects as the land value is high and  there is a lack of vacant space. The challenges force  urban farmers to get creative, Dory says. “You really  have to learn how to work with all different kinds of  spaces.”

But despite any of the difficulties that a project like  this might have, the relationships and opportunities for  people make it well worth it, according to Dory.

“When you see someone working in a garden, it doesn’t  matter where they’re from. That’s been the most positive  part about our project: you see people that might never  talk to each other, people who have visible scars from  the Downtown Eastside. It turns preconceived ideas about  who people are on their head.”

In addition to providing hyperlocal food to Vancouver,  each of the different models demonstrates that farming  connects people and strengthens communities.

The last time I checked, the carrots I planted a couple  of weeks ago are sprouting in my first solo attempt at  gardening. I was lucky enough to secure a small plot in  a church-owned community garden across the street from  my house. When more food is ready for harvest, everyone  will gather for a weekly potluck.

While gardening takes work and effort, the benefits are  many and the opportunities are everywhere.

I told the woman selling me the carrot seeds that I was  worried I didn’t know enough about gardening. “The thing  about plants is, they’re good at growing,” she said.

Click here to read the first part of this series here.