Sparring over change: Street paper founder looks back at its turbulent start 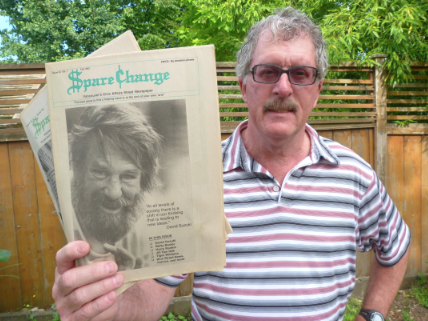 In August 1992, Michael McCarthy launched Vancouver’s first street paper, Spare Change. The paper was sold across the city by homeless and low-income vendors, some who sell Megaphone today. Spare Change had a monthly circulation of 10,000 copies and drew both affection and controversy.

While many supported the paper’s mission of promoting self-empowerment, others disagreed with the paper’s editorial stance against welfare and harm reduction. It resulted in some heated battles with Downtown Eastside activists.

McCarthy left the paper in 1997 (it then changed its name to Street News). On the eve of the street paper’s 20th anniversary, Megaphone sat down with McCarthy to look back on how the paper got started and the impact it left on the city.

MEGAPHONE:  How did Spare Change start?

MICHAEL MCCARTHY: I had read about a street newspaper in New York and I was fascinated by the possibilities. I thought a lot of people in Vancouver would be interested in something similar because in the late ’80s and early ’90s there wasn’t that much homelessness—it was a new phenomenon to see people begging on the street and the mainstream newspapers followed the traditional pattern of “vagrant, transient, bum, these people are just a nuisance on the street.” I didn’t believe that.

I was a journalist and at that time no one was hiring in Vancouver, so I just said I’d create my own job. But making it happen was harder than coming up with this crazy idea because I spent six months taking this idea to various agencies and the responses were 100 per cent negative. No one had the slightest interest in working with panhandlers.

The way I did get it off the ground was the new director at the food bank and I shared the same philosophy. It wasn’t good enough to just hand out food to people; she wanted to help them move upward with job training skills. She said I could put the printed copies in the food bags as they handed them out and that way people would know that there’s a job. That’s how we got started.

MEGAPHONE:  What did you hope it would achieve?

MM: I thought the fact that the New York street paper was selling thousands of copies proved that people care about their fellow man. Connecting people from opposite spectrums is always something that interested me. Obviously there are people who want to work. Not all of them want to beg on the streets. That was my intention: to give a voice to people and to connect them with people who actually care.

MEGAPHONE: What was the response from public?

MM: Positive and negative. Certain people in the Downtown Eastside felt very threatened because a newspaper is such an important tool and those people who have influence in the Downtown Eastside had their favourite reporters who would act as PR agents for them. And they thought, “Oh my goodness, we can’t control this new guy.” John Turvey at DEYAS [Downtown Eastside Youth Activities Society], the needle exchange, was a voracious critic and every chance he would say terrible things about me. Jim Green at DERA [Downtown Eastside Residents Association] did everything he could to shut the paper down short of burning it down.

MM: We had lots of very serious threats like, “You can expect a bomb through the window tomorrow” or “there’s a crew at the Carnegie that is going to come down with baseball bats and take you out.” Stuff like that. I had people coming in the office with knives. I took knives off from people several times that threatened to cut me up. It was very violent; it was very ugly at the beginning. So there was a very negative response from a lot of people.

MEGAPHONE:  What about the positive side?

MM: Our photographer knew a Globe and Mail reporter who said she’d do a story on us and the story went on the front page. I didn’t know anything about this except that at four o’clock in the morning, I got a phone call that turned out to be CKWW Windsor, saying everybody is talking about this. I hung up the phone and it rang seven seconds later. After another interview, I hang up the phone, and it rang 10 seconds later. And the phone did not stop ringing for three months. I mean, every single news outlet in the country tracked me down.

People from Japan, Tokyo, Phoenix, England phoned me, asking, how does this work? I had churches calling me from all over Canada, can you come teach us how to do this. And when we finally got an office, we’d get thousands of letters a day. Guys in prison, people dying of AIDS, people sending money. So the positive outweighed the negative, but the negative was really quite serious because certain people almost put me out of business.

MEGAPHONE:  Twenty years later, how does it make you feel to see how the street paper movement has grown all over the world?

MM:  I think it’s terrific. There are many opportunities for low-tech employment. There are tons of things that are available for distribution through a street vendor. I think street newspapers are one opportunity for low-income people and I’m glad that so many people around the world are giving jobs but there are a lot more low-tech opportunities for people.

MEGAPHONE: What do you think Spare Change’s legacy is?

MM: There are a lot of things I hoped we could do. I wanted to educate people about street life and teach them things that they’ll never know themselves.

I’ll give you an example. We had one vendor who always sold up on the stock exchange. That was his favourite thing—to stand at the stock exchange and sell to the suits. I would stand there sometimes to watch and listen to the conversations. And you could stand there for an hour listening to the suit argue politics with the vendor. It was quite amusing and I was happy to see there was debate going on.