join us donate
LOG IN or SIGN UP
Liquid syntax error: Error in tag 'subpage' - No such page slug join
find a vendor
June 20, 2011

Standing Up for Shelters: Saving the New Fountain 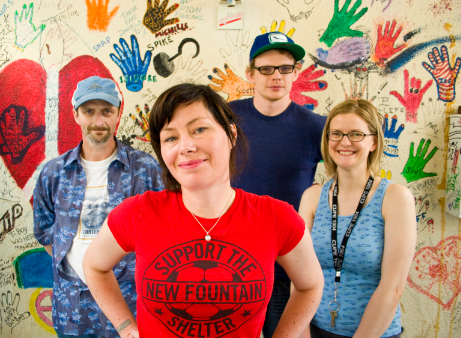 Sarah Blyth leads to fight with other New Fountain Shelter workers to save the shelter. Photo by Matthew Zylstra Sawatzky.

The New Fountain Shelter occupies a non-descript building on the unit-block of West Cordova. Most of the day it stands quiet and empty, but once the sun begins its slow descent west the line outside its door starts to form, night after night.

Operated by PHS Community Services Society, the New Fountain Shelter was opened two years ago as part of the city’s Homeless Emergency Action Team (HEAT) shelter program. Originally conceived to sleep 27 people, the low-barrier shelter was soon filled to capacity and beyond most every night.

“We’ve had a lot more people than expected. We’re overcapacity every night,” says Sarah Blyth, who, along with moonlighting as a Vancouver Park Commissioner, works at the New Fountain. “We just accommodate as many people as we can every night, grabbing extra beds and putting blankets down for people. We just do what we can. Anything is better than having to sleep outside.”

At the end of April, four other shelters across the city were closed, with funding from the city and province having dried up and dollars being re-directed to permanent housing. Now the New Fountain remains as one of the last emergency shelters from the HEAT program, receiving a temporary reprieve until the end of June to help connect residents to permanent shelter.

But if you ask the people who work or stay at the shelter, remaining open temporarily is not nearly enough. 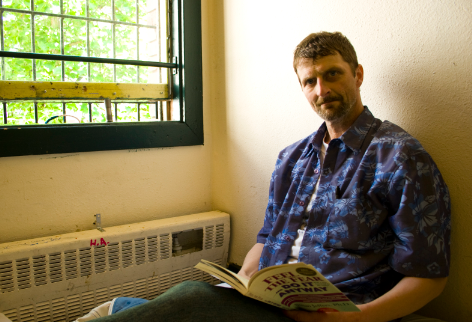 One of the residents of the New Fountain Shelter. Photo by Matthew Zylstra Sawatzky.

Kailin See, who has worked at the New Fountain since it opened and continues to work on the campaign to keep it operating, says that the shelter serves as “a means of accessing the support services people need [in order to] survive.”

See explains that the New Fountain works to provide much more than just a place to sleep. It serves as a hub to connect homeless people with critical services.

“We really work to get to know the person and connect them with the services they need,” says See. “A shelter is not just a bed.”

Climbing up the stairs of the New Fountain that lead from the street to the second floor, visitors will quickly realize this is no ordinary shelter. It’s small with a cozy feel. You may feel briefly claustrophobic walking the stairway, what with the narrow hallway walls reaching upwards to the impossibly high ceilings and the light from the glass door receding behind you, but once you emerge onto the second floor landing, you’re greeted by a hub of activity. First there’s the office, kitchen and television areas, then the lines of rooms that stretch down the hall. 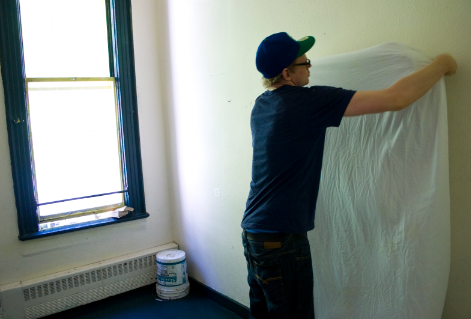 These aren’t luxurious accommodations, but neither are they austere. There is none of the warehouse sleeping arrangements that typify most shelters, those that sleep hundreds of people on the floor of a single large space, something See describes as “demoralizing.”

Blyth agrees. “[New Fountain] is more than just a shelter,” she says, adding that, “we’re helping people get back on their feet. The new [provincially funded permanent] housing is really good, but there are still people on the street and they end up there for all sorts of reasons. Maybe they’ve lost their job or are dealing with a mental illness. We work with those people, asking the questions and assessing where they’re at and what their needs are.

“Having the shelter means we can stay connected with those people. If they’re on a waiting list, we can reach them when housing becomes available, rather than losing touch with them while they’re on the street.”

It’s this passion amongst those that work and volunteer at the New Fountain that imbues itself into the space. People feel comfortable here. In a short period of time, the New Fountain has been woven into the community. Through fundraising, clothing and blanket drives, starting a street soccer team that spearheaded a now-flourishing league (with players attending Rio de Janeiro for the Homeless World Cup last year), plus countless other extracurricular projects on the go, it’s little wonder that its impending closure has raised the passions of those connected to it. 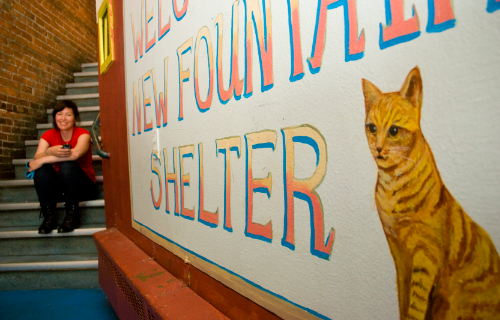 The entrance to the New Fountain Shelter. Photo by Matthew Zylstra Sawatzky.

There was the Save the New Fountain rally at the Vancouver Art Gallery in April, which featured a 24-hour soccer marathon played by staff, volunteers, residents and other supporters. Before that was a letter writing campaign to provincial government MLAs and ministers, letters not just from the growing community of supporters, but, importantly, from the residents themselves who rely on the New Fountain.

“People really want to be a part of the solution with a shelter like the New Fountain,” explains Blyth. “They want to express how they felt about the shelter, what it means to them and how important it is to them. The response was overwhelming.”

The letters are moving, desperate pleas for help and a reminder that the city’s homeless problem is not an abstract thing, but something real and human. “We need a safe, clean, dry place to sleep,” one letter reads. “This shelter saved me from spousal abuse,” reads another.

Despite these calls for help, the shelter’s status remains a matter of wait and see, as the city and province continue to negotiate funding leading up to the June deadline.

“They see the shelter as a place that will help them get back on their feet,” she adds. “It’s really difficult when they don’t know where they’re going to stay or where they can turn.”

See remains confident, and passionate, that New Fountain will remain open and continue to serve the community.

“It’s people from all walks of life who rely on this facility,” she says, then adds defiantly, “We can’t close the shelter.”