With a wide, warm smile and a contagious positive energy, Stephan Scott is a joy to be around, which makes him a natural for the cover of this issue. But the gregarious Megaphone and Hope in Shadows vendor has had more than a few setbacks in his life.

“I grew up east of Montreal, in a little farm town called Saint-Hyacinthe. I had been living in Vancouver until I decided to drive back east to be with my family for the New Year.

“On the first of January 2000, I was only 30 kilometres from my hometown, nearing the end of my long cross-country drive, and I fell asleep at the wheel.

My car ran off the road and off a cliff. I was thrown from the car, through the windshield. I was lucky to survive.”

The crash left Stephan in a coma for two months. While recovering, he received more bad news for his health— he was diagnosed as HIV-positive.

“Everything in my life went down, down, down. It took me almost two years to recuperate to a point where I could live with some normalcy.”

Two years later, Stephan traveled back west, this time for a snowboarding trip. A bad accident on a foggy run left him in a coma for nearly two months. He was lucky to be alive, but suffered severe head, hip and ankles injuries. His family arranged to move him back to a Montreal hospital.

“It took me another two years to get back to my feet again—and with more bad news during my recovery, it made things even harder. Doctors found a black spot on my brain. After the concussions, the comas and everything, I was then diagnosed with brain cancer.

“Doctors told me I had three months to live. I said to myself, I’ll go back to Vancouver—I love it there, and that’s where I want to be. So in 2004 I came back to Vancouver again, for the third time.” 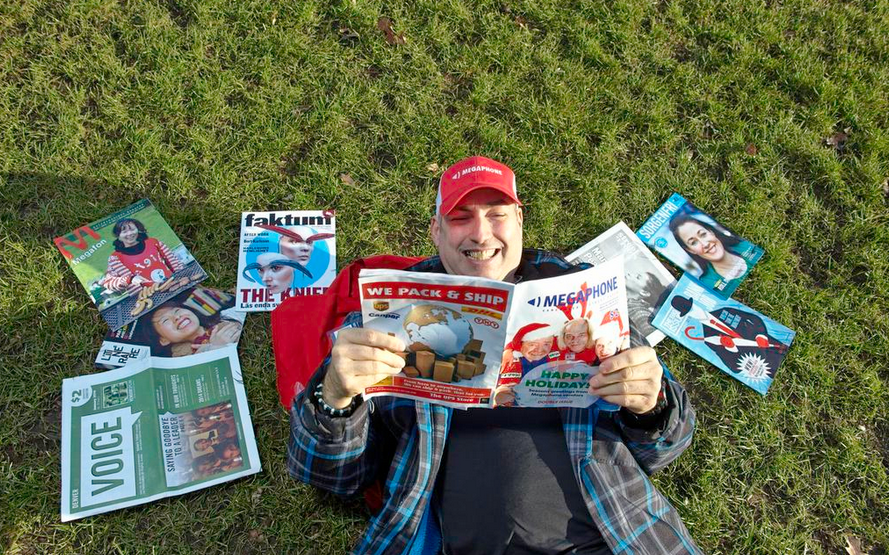 Still experiencing serious health issues, Stephan had little idea of where to go or who to contact for help.

“I was struggling, living on the street in a cardboard box on Granville near Davie Street. I was asking for change just to survive from day to day. One night, a man saw me sleeping in the street. He stopped and said, ‘Do you want to come stay at my place?’ He helped me out until I was able to find a place of my own, and apply for disability support. I feel so grateful to him. Because of that, I shifted into a different phase of life.”

Finally, in 2010, Stephan was assigned a spot in BC Housing at Jericho, where he still lives now.

“Oh, it’s the most beautiful place in Vancouver. I couldn’t ask for anything more! I love my community, I love to meet the people around my neighbourhood. Moving into my home and starting to sell Megaphone and Hope in Shadows happened around the same time for me—such great things!”

Stephan feels a strong connection with Megaphone’s mission, fuelled by his desire to help others.

“I like selling Megaphone because it is a good cause—I feel like I am able to help give something back to society. I am part of a project that creates positive opportunities for people.”

“I have a dream to go to Australia and hold a koala bear. That has always been my dream since I was a child. I hope to save money for a trip by selling Megaphone and Hope in Shadows.

Stephan Scott sells Megaphone at the corner of Davie and Thurlow Streets.