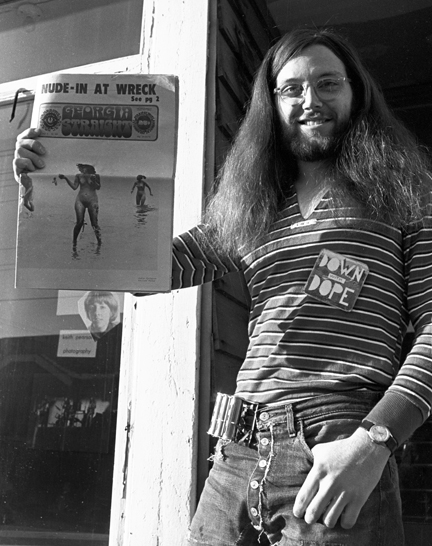 More than 40 years have passed since Korky Day was photographed holding an early issue of The Georgia Straight from summer 1970, featuring coverage of a public demonstration he organized at Wreck Beach. The demonstration was called the Nude-In and aimed at protesting police crackdowns on public nudity. It drew 3,000 people to the beach without clothes.

“From that day forward, police did not bust people for mere nudity,” Day remembers. “They backed off. We won.”

Decades have passed, but the former Georgia Straight vendor stays true to his bohemian roots. He’s still a regular fixture at Wreck Beach, and he continues his contributions to independent media as a host on Co-op Radio, where he appears regularly on It Takes A Village, a show about the parenting.

Around him, Vancouver and The Georgia Straight, have changed radically since his arrival in Vancouver in 1968. He moved north to Canada from California as a Vietnam War resister. Like other young men, he worked casually on the docks as a stevedore. In search of more entertaining work, he found his way to The Georgia Straight’s original office at 217 Carrall St., where he signed up for work as a street paper vendor.

Day bought each issue of The Georgia Straight for 15 cents and sold it for 25 cents. The earliest issues of the paper were sold for a dime. Day and other vendors sold at locations across the city, from busy hubs like the Pacific National Exhibition to suburbs like Richmond, where he was arrested for “possession of obscene material with the intent to distribute.” Police didn’t look at the paper before they arrested him, and the only obscene matter they found was a cartoon where hippies were depicted uttering the phrase, “Far fucking out, man!”

The case was thrown out of court, but it was one of many obscenity charges that the paper received in its early years for publishing what authorities deemed questionable material, including tips on growing marijuana.

On Thursday mornings when the paper hit the streets, Day and other vendors lined up outside the Carrall Street office, waiting for the delivery van full of newspapers to arrive. During the paper's first year of publication in 1967, 750 vendors sold the Straight on the streets. Popular children's entertainer, Raffi, was among them. Vendors purchased 100-copy bundles, sometimes two at a time.

On good Thursday mornings, Day says he earned about $50 an hour. Selling the paper covered rent and living expenses, but most importantly, Day’s involvement with the original Georgia Straight meant he was part of a vibrant, radical community of independent thinkers.

“You’re getting the feeling you’re part of something much bigger. Part of a major rebellion that's sweeping the world,” he says.

“We were all in this together. We were all part of this youth upsurge to transform society from war and hate to peace and love."

Day was involved with the Straight until members of the original newspaper cooperative split due to a conflict over how it was managed. A group of original Straight staffers, including Day, split off to found a competing street paper, The Georgia Grape, in January 1972. Georgia Straight street vendor sales stopped in the mid-1970s. From there, it carried on as a free weekly.

Dan McLeod, one of the Georgia Straight’s original founders, continues to helm the Straight as its owner and publisher. The free weekly newspaper is distributed across Metro Vancouver.