join us donate
LOG IN or SIGN UP
Liquid syntax error: Error in tag 'subpage' - No such page slug join
find a vendor
June 07, 2011 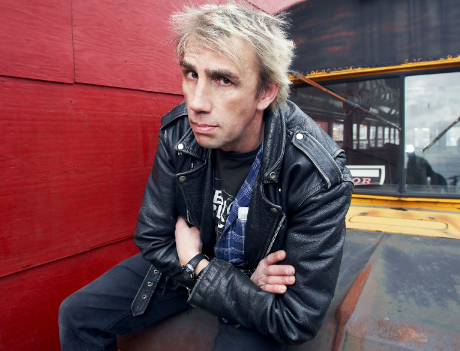 D.O.A. is a band that since its first recording has been known for its raw sound, thundering rhythms and outspoken politics. Led by singer-guitarist Joe Shithead Keithley, the band helped forge a punk rock scene in Vancouver in the late-1970s whose impact reverberated across the world, inspiring legions of followers and future punk legends.

Over the decades, Burnaby-native Keithley hasn’t slowed down, continuing to record and tour with the band, start a record label (Sudden Death Records), run for political office and publish an autobiography. Now he’s compiled the history of D.O.A. in his new book, Talk-Action = 0, collecting the ephemera—from posters to photos to lyrics to album covers—of a career in punk rock. Megaphone spoke with Keithley about his journey through politics and punk.

Megaphone: Your band was not just a part of a special time in Vancouver’s music history, but of a punk music scene that became internationally renowned. What made it such a special time to be making music?

Joe Keithley: What it boils down to is that a lot of people at the same time heard about this new type of music. It was so untraditional compared to the standard. Until then everyone was trying to sound like the Rolling Stones or Foghat. The early ‘70s were one of the worst periods for music.

The whole idea was that you could do whatever you wanted. There were no rules. So there was a lot of enthusiasm, a lot of experimenting. People would just go on that passion and drive, and they would just go out and play and record music. There was less emphasis on having a big time producer or finding that perfect sound. People just starting putting out music, creating music with a DIY attitude and recording singles. It was really cool.

MP: It seems that the anger and DIY aesthetic is mostly absent from the punk scene now. What do you think has changed?

JK: At the time there was just this right combination of events. It went through a barrier almost, where a unique crazy style of music was created. The problem is that a lot of people since that time have tried to imitate it. And what happens when you imitate something is you take out the freshness and the spontaneity of it. It’s not that good bands haven’t come along after that; there just hasn’t been that spontaneity.

MP: D.O.A. and your contemporaries like Subhumans and U-J3RK5 were all really political. It seems a lot of underground music has lost its radical political edge. Why is that?

JK: Punk rock today is still political. A lot of it isn’t—popular punk you’d call mall punk isn’t political at all—but there’s music being made that’s still political in a lot of ways. But often that ends up just being a case of preaching to the converted.

You have to think about what we were going through at that time [when we first started making music]. There was Margaret Thatcher in the U.K., Ronald Reagan in the U.S. and Brian Mulroney in Canada—it was a really conservative time in the world. People reacted to that. And maybe we’re back to that again. There are all sorts of tumultuous stuff happening. Maybe music won’t come out the same way that it did in the ‘80s, but we could get some really interesting stuff coming out of it. 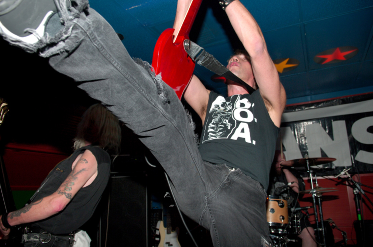 MP: After three decades of punk, how have you maintained the level passion you have for politics and music?

JK: You have to believe in what you do, that you can go out and change the world one little bit at a time if that’s what it’s going to take. I believe that everyone can do that, can affect some change. Change doesn’t start from politicians, it starts from little movements that grow. The powerful people in the world merely react to what people want. It’s about people getting up, rising up, exercising the rights and using their collective power to change their world. For me, that’s the inspiration for continuing on.

MP: You’ve written about your time in punk rock before with I Shithead. What compelled you to publish this new book?

JK: I really wanted to give a sense of how anyone can make change. I came from a pretty regular background: my mom was a homemaker and my dad was a machinist. I just picked up a guitar in high school and started a band. Making records became our passport for travelling the world and be troublemakers. I just want to show people that these things are possible if you exercise your will and use your imagination.

At the same time, I thought this was a good time to illustrate what D.O.A.’s done. I wanted to give people a sense of what D.O.A.’s gone through and what we’ve seen and why we did these things. Why it was pointed politically or why we did something so stupid. You know, we did lots of smart things and we did lots of dumb things. We were definitely flying by the seat of our pants.

MP: Did the making of this book have you thinking about you and your band’s legacy?

JK: Not particularly. I’m a forward thinking guy, and I don’t really dwell on the past. I think the book, in one sense, will give an idea of what you can do and can create, but to me the book is more of an enabling guide than a historical document.

If you can still go out there and convince people to think while having a good time doing it, then I’ll still be out there playing. I’ll be an activist until the day I die.