Tar on The Tusks: Canadian magazine sells out to Big Oil 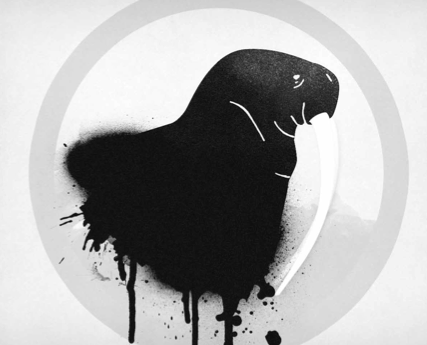 “Divest from the Royal Bank of Canada, close your accounts, tell RBC to stop funding the tar sands project.” This was the advice filmmaker Shannon Walsh gave an audience in Toronto after a screening in 2009 of her documentary on the Alberta tar sands project, H2OIL.

Someone in the audience, noticeably moved by the film’s critical exploration of Alberta’s cash-cow and the planet’s eco-nightmare, had asked Walsh the dreaded question, “OK but what is something we can do right now?” Where many filmmakers would read out the laundry list of tepid actions like writing letters and signing petitions, Walsh gave everyone something concrete and tangible to focus on.

Whether the film has made an impact on RBC’s supportive connections to the tar sands is doubtful, but that might be more of a problem of visibility than apathy—Canadian films are notoriously underserved in the North-of-Hollywood distribution and exhibition matrix. Nevertheless, many had no idea that RBC was so intimately connected to what has been described as the largest and worst industrial project in human history.

As a multi-year subscriber I’ve had my ups and downs with Canada’s more nerdy, conservative counterpart to the American magazine Harper’s. Feature prose articles have impressed and enlightened while lack of creator diversity has disappointed. The comics and covers are often aesthetic triumphs while the politics oscillate between liberal and middle Canadiana. But one facet of the magazine remained unremarkable until a few issues before my deadline to renew my subscription. Their ads.

The Walrus had suddenly become the literary mouthpiece for the tar sands by way of key advertising space sold to the Canadian Association of Petroleum Producers (or CAPP, if you’re on the golf course). Ridiculous ads showing scientists and workers expounding their alleged dedication to the environment—vis-a-vis their work at the tar sands extraction project—suddenly manifested as greasy, opaque spots on the magazine’s bleached pages. 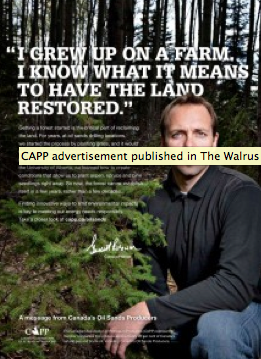 Shocked at this lack of discretion on the part of The Walrus, and perplexed at their unethical advertising policy, I sat down and wrote them a letter.

Not only did the team at The Walrus completely ignore my letter, but they cynically lowered the bar for the arts and greenwash-facilitation. Two weeks after my correspondence I received my last copy of The Walrus in the mail. It slid through the mail slot and plunked on the floor like all the other copies had before it, only as it landed the cover splayed out nearly twofold by way of expanding flaps.

Flipping it over, I opened the cover flaps to reveal another glaring lie by the industry that is destroying the Canadian environment, causing health and social problems to First Nations, and ensuring Canada will never come close to meeting any kind of Kyoto emission target. It was a complete physical and ideological transformation of the cover, the face of the magazine, into propaganda for the tar sands project. It was almost a Kafkaesque metamorphosis.

Magazines in Canada receive taxpayer subsidies to survive and The Walrus is not exempt from this special arrangement, receiving over $260,000 from one federal government program in 2010. It also survives by selling ad space, and not only to squeaky- clean companies.

I get that this is a delicate dance between government, art and commerce—compromises are made all the time. But providing the propaganda arm of Alberta tar sands producers with a platform to mislead the Canadian people and pollute the public sphere with corporate copy is intolerable.

Surely the magazine can develop an ethical, fair and just advertising policy and implement it. There are plenty out there in operation that they can easily review and adapt.

In the meantime I think a combination of tactics are needed to end this ugly relationship between the culture and oil industries—it deploys the innocuous letter-writing kind, such as the one included below, and it includes actions like the one Shannon Walsh suggested concerning their finances: cancelling The Walrus subscriptions and boycotting the magazine until they adapt an ethical ad policy. These will likely be seen by The Walrus as bully tactics, but it is they who are bullying the Canadian public with propaganda about the most important environmental issue facing this country.

This opinion piece was originally published in Art Threat.