join us donate
LOG IN or SIGN UP
Liquid syntax error: Error in tag 'subpage' - No such page slug join
find a vendor
June 13, 2013

The body economic: New book argues that austerity is killing the world’s poor 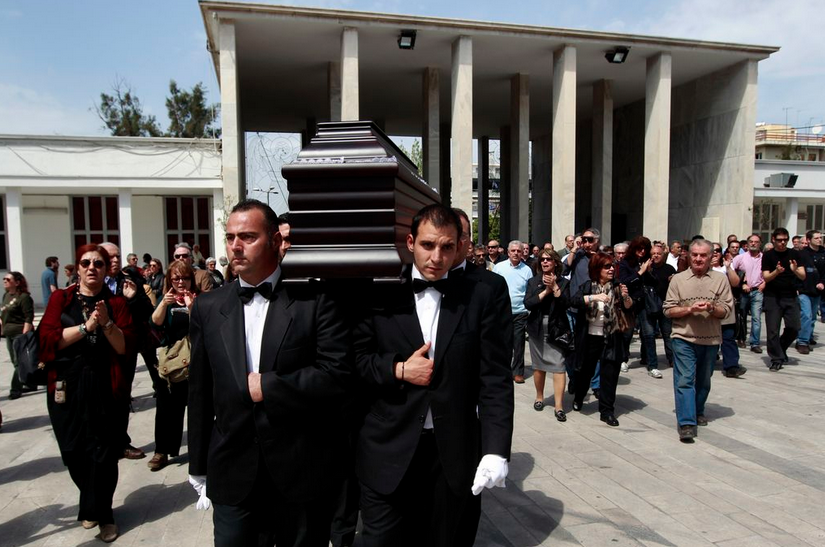 Mourners follow as the coffin of Dimitris Christoulas is carried during his funeral procession in Athens, Greece. Photo by REUTERS/John Kolesidis

On March 28, 2012, Giuseppe Campaniello left for work earlier than usual. He would have kissed his wife goodbye, but she was sleeping so peacefully he decided to let her rest.

Campaniello then set off for the Equitalia tax office in his hometown of Bologna. Once there, he doused himself in petrol and set himself alight. He died nine days later in hospital. Campaniello’s cause of death? Economics.

Just days before, he’d received a final notice from the tax office; doubling a fine he reportedly couldn’t pay, which proved to be the final straw. As tragic as Campaniello’s story is, unfortunately it is not unique. Italy’s detailed system for recording suicides has seen a large rise in the number of death certificates labelled, ‘due to economic reasons.’

In fact, since the global recession began in 2007, there have been some 10,000 suicides across Europe and North America. Whilst no country has been untouched by the crisis, and many have fallen into recession, the impact on populations’ physical and mental health has, curiously, been radically varied.

Iceland saw national debt levels jump to 800% of its gross domestic product—the highest of any nation in Europe—but its citizens’ health has actually improved, suicide levels remained constant and Icelanders continually rank themselves as the happiest nation on earth. Greece, on the other hand, has seen a dramatic 60 per cent increase in suicides, a return of malaria and a doubling of HIV infection rates.

The reason for the above conundrum, according to a ground-breaking new book called The Body Economic, is austerity. Authors David Stuckler and Sanjay Basu of Oxford and Stanford Universities, respectively, argue that not only is austerity bad for the economy, it is bad for our health.

Based on a decade of meticulous research, Stuckler and Basu concluded that when governments respond to recession with austerity measures, cutting away at social safety nets in a bid to reduce deficits, they put the most vulnerable society into an even more precarious situation. Furthermore, they said: “economic shocks such as losing a job or a home can subsequently turn into a health crisis.” With their confidence rooted in a decade of detailed research, the authors are blunt—“recession hurts, but austerity kills.”

Since the economic crisis began, the figure of 10,000 suicides is over and above pre-recession trends. In Greece, a sharp austerity agenda has produced dramatic results. Greece has become the pressure cooker of Europe with high levels of unemployment compounded by a 40 per cent cut to the nation’s health budgets. The crisis is taking its toll on both peoples’ mental and physical health, and the country—which once had one of the lowest pre-recession suicide rates in Europe—has seen a dramatic 60 per cent increase. Furthermore, cuts to insecticide spraying programs in the southern part of the country saw malaria reemerge for the first time in 40 years, and an outbreak of mosquito-borne West Nile Virus in August 2010, killed 62 people.

After six years of recession—which shows little sign of abating—widespread poverty, unemployment and a 25 per cent increase in homelessness has driven some Greeks to illegal drugs such as heroin as a means of escape. The country has seen a 200 per cent increase in HIV infection rates, the vast majority a result of more intravenous drug use. At the same time, budgets for needle exchange programs have been slashed.

The book includes the story of Dimitris Christoulas, a retired Greek pharmacist. Despite having paid into the system throughout his working life, the Greek government slashed his pension leaving him unable to afford his medication which rendered his life intolerable. On the morning of April 4, 2012, Christoulas walked up the steps to the Greek Parliament and declared, “I am not committing suicide. They are killing me,” before putting a gun to his head and pulling the trigger.

Stuckler and Basu assess austerity as if it were part of a clinical trial, stating in the preface that they hope to “inject hard evidence into the debate about austerity—a debate that has been shaped far more by ideology than facts.” Their scientific approach cuts like a scalpel through propaganda and ideology, which makes their findings all the more compelling.

As Stuckler and Basu point out—in survey after survey—people are consistent about what they value most; their health and that of their families. When something this fundamental is threatened by austerity, questions must be raised as to why the policy is still being pursued.

This article appears courtesy of the International Network of Street Papers.