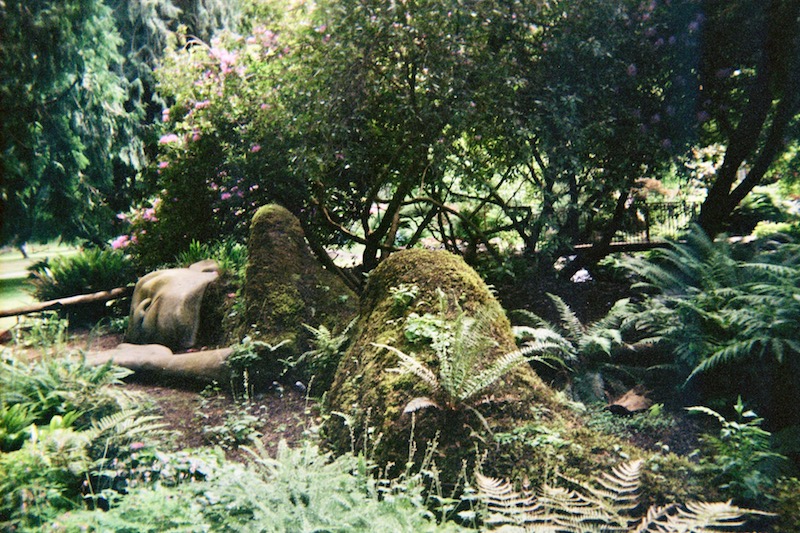 In a shady clearing in Beacon Hill Park in Victoria lies a woman, forever in repose—sleeping, seemingly sacred, a blanket of soft greenery settling over her like a second skin, her face the picture of peacefulness.

The Moss Lady is calmness incarnate in the midst of a bustling downtown core, and many visitors, upon encountering her for the first time, are moved.

“The first time I saw her I thought, 'Wow, there she is,’ recalls photographer and Megaphone vendor Fred Willingdon. “She’s sleeping amidst all of the sadness and uncertainty of our modern world... sleeping in the park amidst a world of chaos. I thought that was perfect.”

The 11-metre-long art piece was installed in the park in 2015. Conceived and created by gardener Dale Doebert with help from Victoria city employees, it depicts a moss- covered woman partly submerged in the earth. It was inspired by a similar horticultural sculpture in the Lost Gardens of Heligan in England called the Mud Maid.

It took about $30,000 and 300 hours to construct The Moss Lady, which is located behind Cameron Bandshell near a gently running brook. It is made out of cement, boulders, metal pipe, chicken wire, clay-based soil and locally sourced cat-tail and club moss. The lady’s “hair” is flowering crocosmia plants.

“I just thought the idea was so unique,” Fred says. “I’d never really heard of anything like it before. I’ve been trying to find her for a couple of years because I do like different kinds of art where someone  has put some thought into it than just regular run-of-the-mill art and that’s exactly what The Moss Lady provided for this photo.”

Fred hopes his image will inspire others to create something similar in another park.

“It just resonates with me,” he says. “It’s such a beautiful sculpture.”

About the photographer: Fred Willingdon was born in Vancouver and spent nearly 20 years of his adult life in Maple Ridge. In 2006, he moved into a supportive housing complex in Victoria
and began selling Megaphone just over three years ago.

Fred enjoys boating, camping, walking and hiking. He also likes to keep his mind sharp by taking college and university courses.
“I like to keep educating myself as much as I can, learn something constantly,” he says. “The more I learn, the more cognizant my brain and the younger I feel. I’m definitely not stopping taking courses any time soon.” Fred says being involved with Megaphone helps prevent him from feeling isolated. “It gets me out... gives me a reason to get out of the house, and I’m not stuck inside a building like I have been with other jobs.”