join us donate
LOG IN or SIGN UP
Liquid syntax error: Error in tag 'subpage' - No such page slug join
find a vendor
December 12, 2012 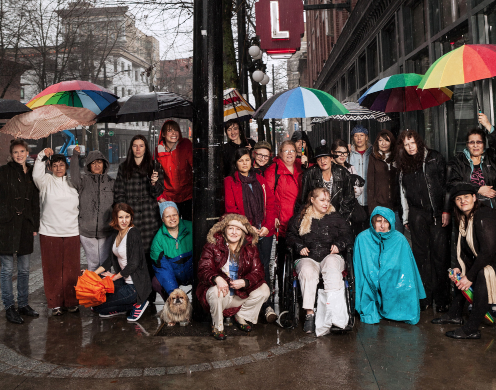 Residents and staff of the Hotel Rainier outside the hotel on Carrall St. Photo by Johann Wall/Portland Hotel Society.

For Sherri Johnstone, resident at the Rainier Women’s Treatment Centre in the Downtown Eastside, the last two weeks have brought on some tearful goodbyes. As Health Canada funding for the four-year pilot project ceased December 1, Johnstone and the Rainier’s 37 current residents are adjusting to immediate cuts in staff and programming.

“It’s been hard,” says Johnstone, who struggled with crack addiction and failed at traditional treatment programs before she was referred to the Rainier in 2011. “We started to open up to these women and now they’re not here. ... Now we have to do that again with somebody else—it makes me feel like I’m almost back at day one again.”

Before December, Johnstone could access the Rainier’s full range of physical and spiritual recovery tools including meditation, yoga, vocational training and creative writing workshops led by Megaphone. These programs have now been cut, though the Megaphone writing workshops will continue thanks to private donations. The facility also had an in-house caseworker, counselor, full-time nurse and part-time doctor—all of which have moved offsite.

“We’re being encouraged to go to other programs that are outside the facility, which is okay, but a lot of women—like me—I know I don’t like to go out much,” explains Johnstone, who graduated from treatment into drug-free transitional housing after 14 months. “I try hard to stay in because all of the drug interactions and everything on the corner.”

In February 2009, Health Canada and the B.C. Ministry of Housing and Social Development announced a combined $14.5 million investment into renovating the Rainier Hotel and implementing the first all-women treatment facility in the Downtown Eastside. The addictions centre served women with histories of prolonged homelessness, physical abuse, sex work, mental illness and other barriers to conventional treatment with a new self-directed, holistic and non-punitive approach.

B.C. Housing has renewed its investment in Rainier residents, but Vancouver Coastal Health (VCH), which is contracted to administer treatment in collaboration with the non-profit Portland Hotel Society (PHS), decided not to take up operational costs after Health Canada funding ran dry.

“I can tell you we are not turning our backs on these women,” says VCH senior media relations officer Anna Marie D’Angelo. “I know that there were other programs that were not directly healthcare. At VCH we provide healthcare, so we don’t fund things that aren’t healthcare.”

Instead, VCH has secured one months’ worth of transitional funding, so that residents will still receive meals and visiting clinical services until they are placed in mental health, addictions and food programs elsewhere.

“We’re not saying what was there before was not beneficial. The key things that caused the programs to be beneficial—the housing and the healthcare—are still in place,” D’Angelo says. “There is nothing we saw in the evaluation that showed the benefits were significantly better than other programming we have.”

According to Mark Townsend of PHS, which co-wrote evaluations with the B.C. Centre for Excellence in HIV/AIDS, the Rainier was effective at reaching extremely vulnerable women “where they’re at.”

Upon arrival, Rainier participants experienced more lifetime homelessness (100% vs. 87%) and higher rates of mental illness (79% vs. 59%) than cohorts monitored by the National Institutes of Drug Abuse (NIDA), according to those evaluations. Yet Rainier residents are more likely to enroll in methadone treatment (58% vs. 39%) have higher rates of drug abstinence (51% vs. 5%) and take fewer sexual risks (8% vs. 22%) than community counterparts.

“The evaluations show this was an effective program for this group of very complicated people,” Townsend says. More results found 61 percent of participants are treated for health conditions they were unaware of before living at the Rainier, while 77 percent have been connected with outside employment and training.

In the coming weeks, Townsend plans to make an appeal to the provincial government, in hopes of restoring what he calls the “heart and soul” of the Rainier treatment program.

Johnstone cites the Rainier’s mindfulness classes and writing workshops as instrumental in her recovery and ability to articulate emotions. “At first I didn’t think much of it, but I went,” she recalls of her first Megaphone workshop. “It just opened up the door for me to write.”

As Johnstone continues living clean and working within the neighbourhood, her concerns have shifted to other women who just arrived at the Rainier. “What I want is for other women to be able to access the program the way I did,” she says. “I’ve been here for a year and a half, and I’m a very different person than when I was when I first walked in.”