join us donate
LOG IN or SIGN UP
Liquid syntax error: Error in tag 'subpage' - No such page slug join
find a vendor
August 31, 2012 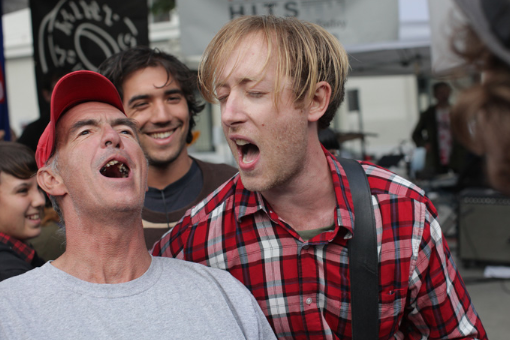 A free concert in the Downtown Eastside? In Victory Square? Were we nuts?

Victory Square is one of the most well-known parks in the city, noted by the annual Remembrance Day commemoration broadcast across the province and infamous for the relief riot and camp during the Great Depression.

However, by the early 2000s, Victory Square was derelict, its grass patchy and benches left unmaintained. For people who considered the Downtown Eastside a no-go zone, the Square was its gateway, albeit one with a mysterious underground public washroom.

But a group of planners within the Vancouver Park Board wanted to try out a new theory: parks are popular because they are used, not because of location. Therefore, they reasoned, it was possible to create traffic in a place that lacked it.

The park board had recent success turning empty asphalt beneath the Dunsmuir Viaduct into a skatepark with the help of the Vancouver Skateboard Coalition, plus bringing then-new pedestrian traffic to both Expo Boulevard and Andy Livingstone Park. For Victory Square, the park board called on the Coalition again.

To renew Victory Square, bushes around the edges were trimmed, the field was reseeded and a platform to view the entire park was created in the southwest corner. For the skaters, a wide looped walkway around the field’s perimeter was laid down. A special bench, perfect for the Ollie, could be found on the park’s Pender Street side.

Watching all the construction from the Terminal City Weekly office at the then-largely-forgotten three-storey Flack Block at the corner of Hastings and Cambie, we suddenly saw it.

The park board built one other thing: a stage, wired with electricity, that fanned up into a natural grassy amphitheatre. That was the icing on the cake we needed. As neighbourhood regulars, we already loved Victory Square for one of its best-kept secrets: the “scary” underground washrooms are some of the nicest public restrooms in the city.

The first Victory Square Block Party was held on Labour Day 2004, with 1,800 guests and a spectacular sun. Park board commissioners and staff glad-handed. The park was back in business. Terminal City Weekly ran the festival for two years. After that it was taken up by Only Magazine, which comprised many of the same people. On the first edition under Only’s watch, we stood in slack-jawed horror as, in the middle of the afternoon, the park’s sprinkler system went off.

Vancouver concert goers, known for their unexcitable nature, grabbed sandbags from the tents, placed them on the sprinkler heads, then sat on them. The park board later told us it was a one in a million fluke of the old-part-of-town water system. The next year, the sprinklers went off again. It may be no coincidence that since Megaphone and Music Waste started producing the event, the sprinklers have never gone off again.

Darren is the founding editor of Terminal City Weekly, the founding publisher of Only Magazine and is on Megaphone’s board of directors.