join us donate
LOG IN or SIGN UP
Liquid syntax error: Error in tag 'subpage' - No such page slug join
find a vendor
November 14, 2013

The Washington Hotel: A firsthand account of living in an S.R.O. 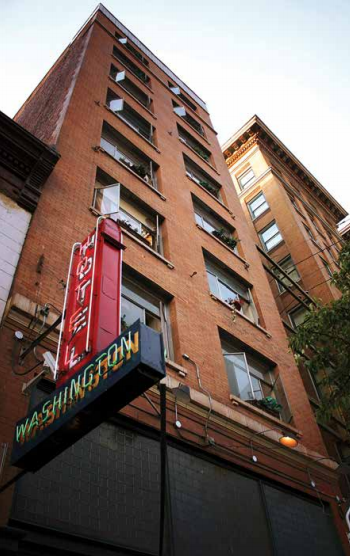 Some people have lived in the Washington Hotel. And some people still do, even though it is classed for constructive upgrading. Once you have stayed at the Washington for a few weeks, it never really leaves you. You think of your neighbours. You think of the front desk people. And you forget about a lot of them, too. There were so many. And you miss the company. There was always someone to at least say 'hi' to in the hallways or at the front desk even though most of them were not going to say 'hi' unless you did. You miss rooting for these people.

I would fantasize that everyone in the building was somehow going to start receiving payments of $3,000 per month to live off of.

Some people lived at the Washington Hotel, and some people died at the Washington Hotel. About three to four a year. They died of alcoholism. Heroin overdose. Old age. But they really died from noise pollution. The stress of listening to motor vehicles pass by constantly takes a significant toll on the individual. How can one relax when all you here are buses stopping, buses going, buses lowering, buses raising, bus lines whipping about, cars accelerating uphill, cars decelerating, sirens, horns, cars driving over the rolls in the adjacent parking lot, the gate opening and closing the cars to enter and exit the parking lot, doors slamming and people yelling from the alley to get someone to come down because they could not get in the building without a tenant escorting them?

You would be sitting in your room and you would hear some guy yelling, “Teddy—Teddy—Teddy”, and you were sure nobody named Teddy lived in the building, but you were never quite sure so you would have to just sit there and wait for the yelling to stop. And then there are the city workers scraping the odd piece of garbage off of the alley floor with their metal shovel that the local Downtown Eastside (DTES) street cleaners would have easily picked-up with their plastic rakes. Add on the early morning dumpsters emptying their bins. Plus bonus sounds from the Hallowe'en misfits lighting off bombs in the alley because of their special effect with the sound barrier. But the best noise was the rare sound of thunder raging through the alley and into your room vibrating one's bones. I do not know what noise was worse. Probably the motor vehicle traffic because it was happening about 20 hours a day non-stop, like huge waves crashing on the beach, but not nearly as pleasing. Well, not pleasing at all. More like maddening.

So to relax in your noise-polluted room the size of a beer can that acts like a boom box with the sounds echoing off your close-quartered walls, and coming in from an alley that magnified sound off the Washington’s walls, and adjacent buildings’ walls, you would get drunk or high. Some people have lived at the Washington.

Compound this with consistent use, poor health from noise pollution and lack of nutrition—the Washington served one good meal a day at lunch, but it was not nearly enough food for the day—and most people did not eat anything else—and you would get people dying way too young. Death from life at the Washington.

No wonder some people would rather be homeless. Some people have lived at the Washington Hotel.

It will be reopening in about a year. Be sure to say a prayer for its tenants. Whatever the construction is going to fix, it ain’t going to fix the noise pollution problem. Unless they double- pane the windows somehow.

So go get your fix and relax in your room with your senses numbed. And the city will probably announce its renovation accomplishments, but the main problem will not be fixed. You will not learn about the noise pollution problem.

The city does not have a clue of what it is like to live in a single-room occupancy hotel (SRO). Nobody in civic office has ever dared stay in one. They should try it. I would recommend a month. Nobody has ever died from just a month at the Washington. Think of it as rebar—an introverted form of rehab. One could learn a lot. Welcome to Vision Vancouver’s new party headquarters. What’s good for the goose is good for the gander. I would also recommend the construction of high rises in the DTES. The further away from the street the better. Some people have lived at the Washington.

I like to remember the Washington between midnight and 4am. No cars, no pollution. A beautiful summer night spent listening to 102.7 FM, looking out the window at other historical buildings and the few trees that were planted (and one wild coyote going down Cordova Street at 2am one night), surrounded by people who were all of a sudden sane and sober as if a war had come to an end. No cars, no problem. Some people have lived at the Washington. And some people still do.

I hope this article sheds some light on living conditions in the DTES and brings about some compassion around drug use—with such few facilities for affordable recreation and a real lack of job training sites nearby that could cater to the residents of the DTES, as well as a lack of suitable living spaces that comfortably support tenants, there is not a lot of options available to the typical resident of the DTES.

Perhaps the four Pillars should be: 1) Appropriate living spaces 2) Educational and job training facilities 3) Affordable recreational facilities (bowling alley, curling rink, fitness facility, swimming pool, etc.) 4) Disability diagnosis for everyone living in the marginalized ghetto that we refer to as the DTES, so as to build enough of a self-sustaining financial foundation for more businesses to open their doors to the residents who typically do not have enough money to support the growth of, or even existence of, needed services that most of us take for granted (like a plant shop, pet food store, cell phone outlet, furniture store, television/ computer outlet, shoe store, clothing shop, restaurants, etc).

Just providing shelter to those in need is not enough for a world class city such as Vancouver.

The DTES has acted as a refuge for many fellow Canadians, immigrants, British Columbians and locals, as well. As a consequence, the City of Vancouver needs to do a better job of utilizing the federal and provincial governments to aid in it its rebuilding, and provide incentives for businesses and job schools to open up shop in the Hastings Market area so as to change the focus from drugs to progress.

Why should these people have to live in a jerk water town stuck in some sick man’s time warp? Given the proper support I’m sure most in the DTES would love to have a job to go to, and a suitable home.

Some people have lived at the Washington Hotel. And some people still do.

John is a 42-year-old secondary teacher with the Richmond School District and is currently on disability. He lived at the Washington Hotel for parts of 2009- 2011. The longest he was able to stay for consecutive days was three weeks.