join us donate
LOG IN or SIGN UP
Liquid syntax error: Error in tag 'subpage' - No such page slug join
find a vendor
October 16, 2012

The Way We See It: Hope in Shadows photography contest showcases the Downtown Eastside through the eyes of its community 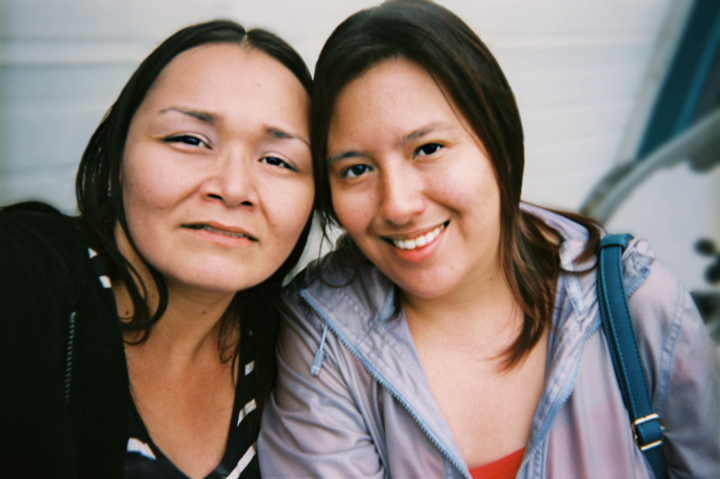 Peering through a camera lens offers a fresh perspective on the everyday. The viewfinder narrows your vision, framing and isolating a particular scene, forcing focus on the specific, the special, the unexpected.

The person holding the camera has the power to create an image of something using his or her own eyes and experiences, and later, show it to others. So when it comes to presenting an image of a community, it’s best done by those who know it well and live in it.

“Through this experience, you really see the value in the Downtown Eastside,” says Amy Wilson. “I love looking through the lens and seeing the way things look through it. You see things differently.”

On Tuesday, October 2, Hope in Shadows announced Wilson as the 2012 photography contest winner at the annual project launch at the Carnegie Community Centre.

“I really enjoyed taking the pictures. It was a fun experience,” Wilson says. This year marks her second time participating in the contest. “[with my prize] I’ll buy myself a camera. All this time I’ve been having to take pictures using my cellphone, and then I need to delete the ones that aren’t my favourite when I run out of room.”

Having copies of her photographs will present an opportunity for Wilson to send pictures back to her family in Ontario. 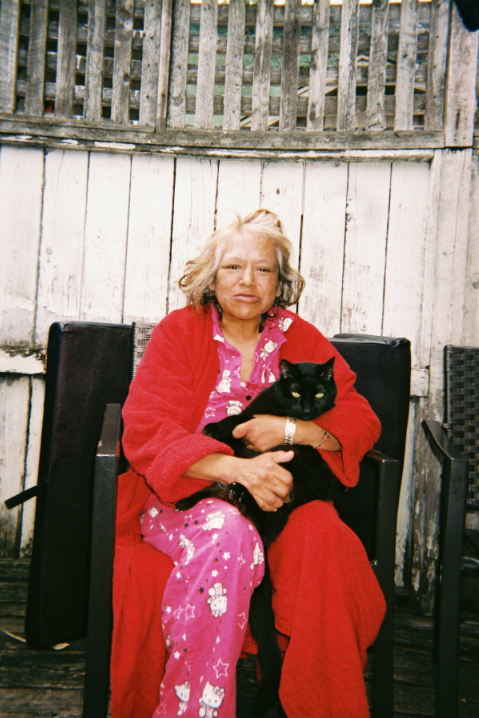 Hope in Shadows, a local charitable organization dedicated to creating positive change for people and communities impacted by poverty, convenes its namesake photography contest each June. The three-day contest gives Downtown Eastside community members an opportunity to showcase the neighbourhood’s strengths. Pivot Legal Society started the contest in 2003 as an alternative representational outlet for a community so often portrayed negatively by outsiders.

“I think it’s meant a lot for some of the contest participants, and especially some of the winners, to identify as a photographer and as an artist,” says Hope in Shadows project coordinator Carolyn Wong. “And to add this identity—as an artist, and photographer, and contributor to this project—has been important and meaningful.”

Participants receive a disposable camera to shoot photos for three days. With the camera comes the power to depict the community through the eyes of the photographer, where they receive copies of their prints. 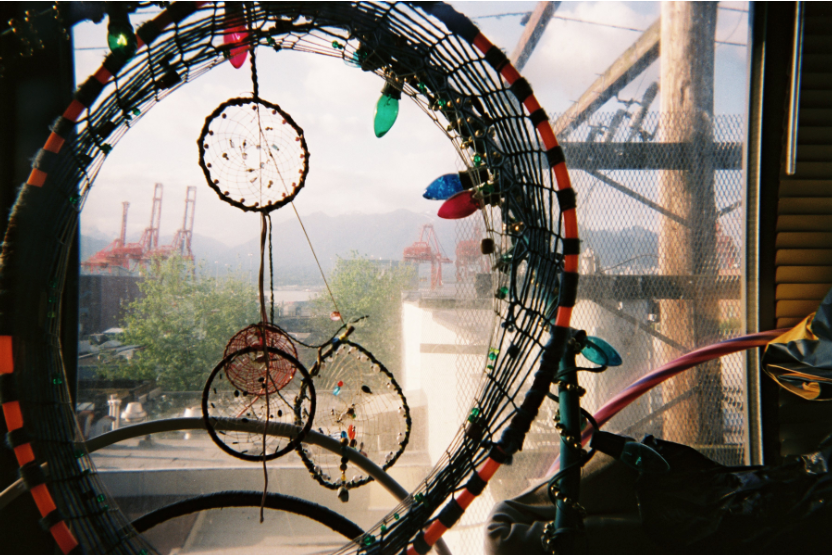 Participants bring the cameras back to Hope in Shadows at the end of the three-day photo contest period. From there, a panel of judges consisting of professional photographers and artists, some of whom are also low-income members of the community, deliberates and narrows down the hundreds of images to a set of 40 top photos. Those 40 photos then go to a community vote. The first-place winner of the vote receives $500. Multiple second- and third-place winners, as well as those who place in the top 40, receive cash prizes.

Top images, decided by the community, are featured in the Hope in Shadows calendar with a story about the photo and the photographer. Vendors—part of a program established to provide employment to those affected by poverty and marginalization—then sell the calendar for $20 each, keeping $10 of the profit.

“In the 10 years, the community involvement and enthusiasm for the project has grown,” says Wong. “And interest continues to grow, whether it’s people who want to participate as a photographer or being part of the vendor program and working with us to sell the calendar.” 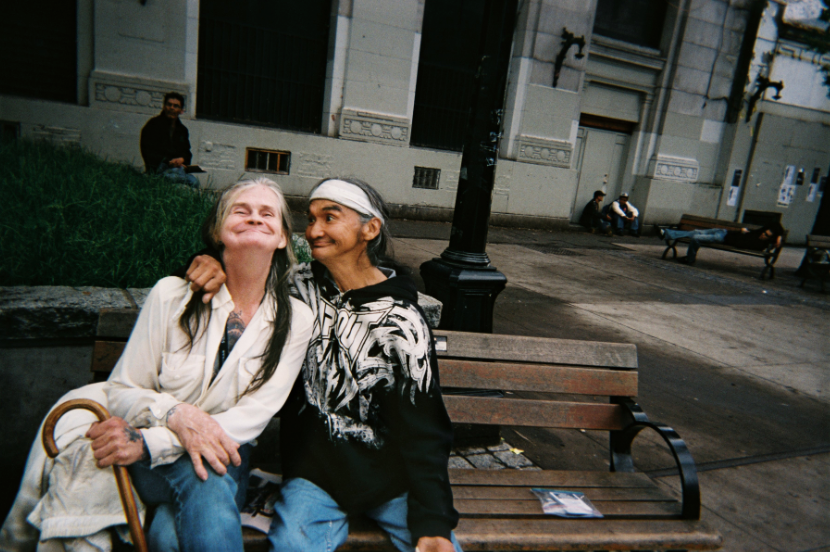 "Foolin' Around" by Audrey Hill. Honourable mention in the 2012 Hope in Shadows contest.

This year’s theme, “What I value in my Downtown Eastside community,” saw over 4,000 pictures submitted, with both a colour and black-and-white copy of each.

Upon receiving her camera, Wilson, a self-described people person, immediately began exposing the shutter to the diverse faces of the Downtown Eastside, particularly of her four children.

An active member of her community, Wilson is part of a single parents group fighting to raise the rate of social assistance. She also volunteers at the Downtown Eastside Neighbourhood House.

“I serve food there, or help out in the coffee area, but sometimes people just need somebody to talk to, so I’m there for that too,” Wilson says. A photograph of her daughter made it into the 2012 calendar as the feature photo for the month of August after her first time participating in the contest in 2011. 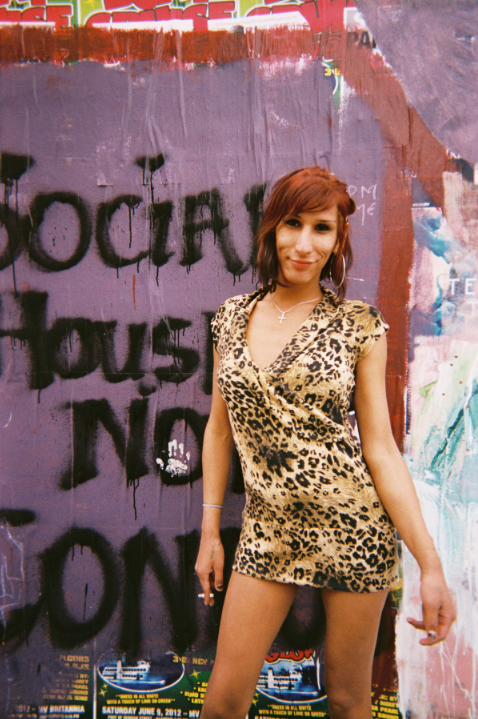 "Shayna at the Paint-in" by Rachel Lynxleg. Honourable mention in the 2012 Hope in Shadows contest.

Once Wilson started snapping photographs, the Hope in Shadows contest quickly became a family activity. One of her eight-year-old daughter’s photographs made it into the top 40 for the 2011 contest.

This year, Wilson’s submissions emphasize the value of her own community connections. Her winning photograph for this year’s contest is a snapshot of Wilson holding up the camera to get a picture of herself with a friend. It highlights the importance of relationships for her well-being, according to Wong.

“There are other photos as well that really showed those bonds of friendship that people have and that’s something they value in the neighbourhood,” Wong says. “I get the sense that participants care a lot about being able to represent their community and the community’s values to the general public.”

Another winning contest image that portrays a widely-felt sense of community solidarity shows Downtown Eastside resident James Robertson being embraced by a longtime friend [pictured below]. At the moment the picture was taken, Robertson had just found out that his mother had passed away. 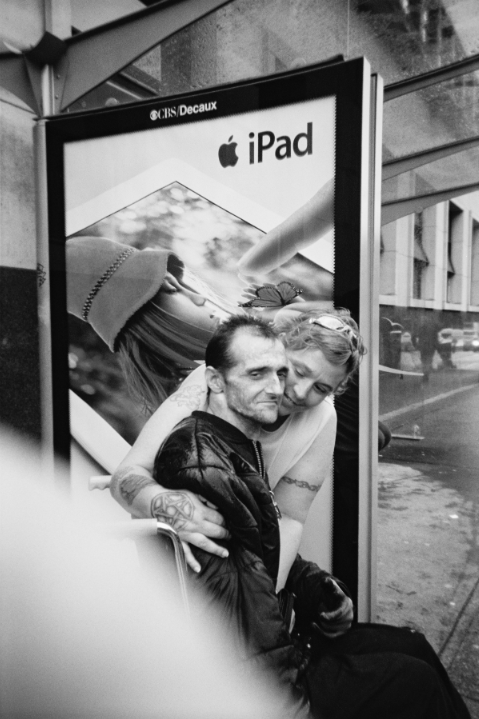 "Affection" by Denny Curtis. Honourable mention in the 2012 Hope in Shadows contest.

Other photographs highlighted the value of Downtown Eastside neighbourhood assets such as green spaces and how they uniquely engage community members. This year’s photo that earned a distinction for “Best Colour” depicts a beekeeping effort in the community garden beside InSite, the safe-injection site on East Hastings.

“It’s just not something that you’d expect to see in this neighbourhood and I think it’s a beautiful metaphor as well—tending to the bees and the bees being an endangered species on this planet and how important it is to tend and care for those things that are vulnerable,” Wong says. 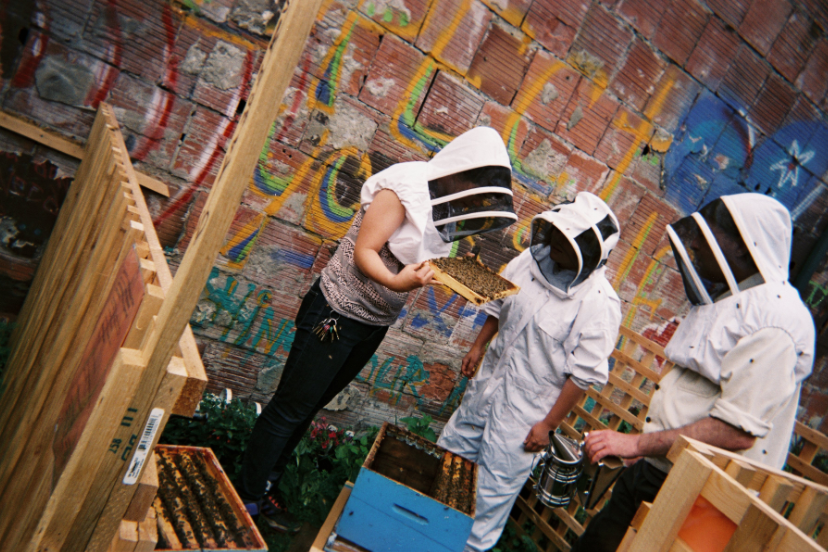 "Beekeepers" by Raymie. "Best Colour" distinction in the 2012 Hope in Shadows contest.

Wong remembers thumbing the pages of the 2008 Hope in Shadows book before she began working on the project that spring. It was then that she started to grasp the complexity of the relationships in the Downtown Eastside and realized how little she knew about it. The project and vendor program has now grown astronomically in the five years since then.

“I think we now have a commitment to offer not just the employment opportunities, but also the storytelling opportunity,” says Wong. “Being able to interact with the images and spending time with the stories [gives people] an opportunity to deepen their understanding of the community.