join us donate
LOG IN or SIGN UP
Liquid syntax error: Error in tag 'subpage' - No such page slug join
find a vendor
October 04, 2012

To and From: Centre A exhibit looks to the past to understand the present 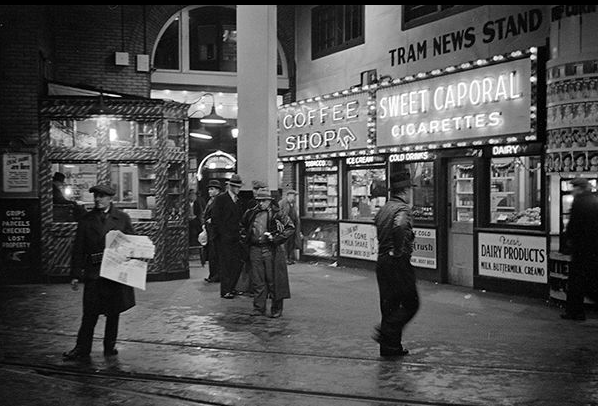 The tram news stand and coffee shop illuminated at night in the BC Electric  Building at 425 Carrall St. City of Vancouver Archives, AM640:CVA 260-778, 1937.  Photographer James Crookall.

All tracks once led to the corner of Carrall and Hastings streets, a hub of interconnecting stories and experiences housed by the former BC Electric Railway (BCER) building.

Three separate railway systems ran through it, connecting Vancouver to faraway places like Chilliwack in the early half of the 20th century.

Bars, restaurants and shops soon followed, teeming with businessmen, waitresses and entertainers from diverse backgrounds. The awkwardly angled corner pulled public focus away from Gastown, to the city’s new centre.

“The scar of the railway system is still very much evident in the city,” says Annabel Vaughan, co-curator of Centre A gallery’s new exhibit, To/From BC Electric Railway: 100 Years. “It really shows the power of the CPR and how these buildings become places in our own cognitive maps.”

With the exhibit having opened in mid-September, Centre A, on the ground floor of the historic structure, celebrates the 100th anniversary of the BCER through artwork by local artists Raymond Boisjoly, Stan Douglas, Ali Kazimi, Vanessa Kwan, Evan Lee and Cindy Mochizuki.

“Instead of covering the exhibit with old archives and photos, we wanted to show a few art pieces that would bring back other people’s memories,” says Makiko Hara, curator of the gallery and co-curator of the exhibit. “We want people to come and share their own stories and memories of the neighbourhood.”

The very architecture of Centre A reflects its past life as a crucial point of intersection. The three grid systems of Vancouver connect inside, as sets of columns follow different lines.

“I call it the belly button of Vancouver,” says Vaughan, who wrote her architectural thesis on the building. “I saw an old image of it and it looked like Chicago in the 1930s. And I wondered, where did that urbanism disappear to? This area has captivated me ever since.”

Works such as a selection of photographs from Douglas’ “The Malabar People” show traces of a vaudevillian Vancouver. Four black-and-white portraits are taken from the 16-photograph collection, depicting patrons and staff of a fictional 1950s club. Striking to see, the large pictures show the mixed demographics and socio-political tensions of the area.

On the other side of the wall, Lee and Kazimi focus on the racial tensions of Vancouver’s past and present. In a film, Continuous Journey, Kazimi tackles the largely ignored racist history towards South Asians by the “Continuous Journey Regulation of 1908.” Lee brings these similar attitudes into present day with his rendition of the 2009 Ocean Lady—when authorities seized the ship carrying Sri Lankan crew and passengers seeking asylum in Canada.

Boisjoly develops a text-based work using old interurban maps of the milk train, to consider location within a cultural and geographical history. Tucked away in the corner of the gallery, Mochizuki’s “Confections” recreates a Japanese confectionary shop, which were in abundance before the uprooting of thousands of Japanese Canadians during World War II.

In the centre of the white-walled gallery, perhaps an anchor to the exhibit, Kwan’s “Vancouver Family” ties together the idea of collaborative storytelling through diverse histories. Hers is an ongoing project where she sent a package to all the Kwans (numbering 300) in Vancouver, with a letter asking, “Is there a place you’d like to go, but have never been?” She enlarges and frames some of the 51 responses she received.

When the privately owned BCER changed ownership by the province, the headquarters moved to Burrard Street in 1961, shifting the economic centre of the city drastically, and permanently.

“These spaces are now often disregarded, as buildings get torn down,” says Hara. “It’s a shame. This is something important and we have to pay attention to the fact that we are here.

The exhibit ends with a panel discussion with Boisjoly, Kwan, and Mochizuki, catalogue launch and closing party on November 10. A film screening of Continuous Journey will be held on October 20 with Lee and Kazimi present.