join us donate
LOG IN or SIGN UP
Liquid syntax error: Error in tag 'subpage' - No such page slug join
find a vendor
June 13, 2019
by Michelle Gamage follow this author
photos: Tegan Willmott with a western toad (above). Photo by documentary filmmaker Isabelle Groc (right).
feature

Why didn't the toad cross the road? 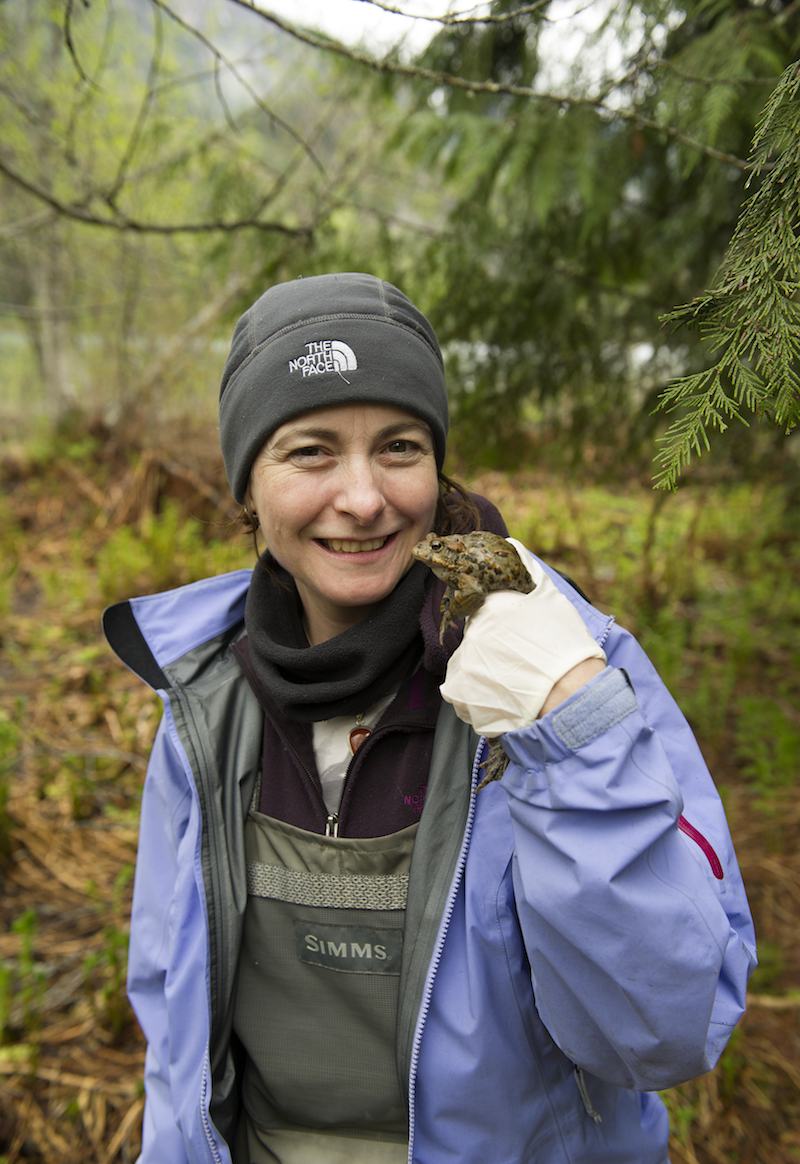 “Never doubt that a small group of thoughtful, committed citizens can change the world; indeed, it’s the only thing that ever has.”

Deep in the lush forests of the Fraser Valley in British Columbia lies a small town called Ryder Lake. Positioned in the foothills of the Pacific Coast mountains and built out of family-owned farms, it’s an area where the wilderness, and its occupants, bleed seamlessly into the edges of people’s homes.

The local wetlands are the breeding grounds of the endangered western toad, and three times a year, the toads’ migration is a sight to behold. Millions of “toadlets”—juvenile thumbnail-sized toads—migrate from the bogs of their birthplace to the dense forests of their adulthood. The awe-inspiring scene is described by residents as something big in motion, “like a carpet moving.”

But the wetlands in Ryder Lake are surrounded on all sides by busy roads that fragment the toads’ natural habitat. During the toadlets’ migrations, the streets have been known to get so slick with their crushed bodies that the municipality sends out trucks to sand the main streets ahead of time.

Still, dead, dying and maimed toads litter the roadways. It’s one thing to see the toadlets’ squished bodies, residents say, it’s another to hear the “popping sounds” they make while being run over.

“You can see them dying, but to hear them as well… it’s really hard to listen to that,” says one woman.

It was amid this scenario—the intersection of an endangered species heeding an ancient call for survival and humans’ own concrete-based migrations—that Toad People was conceived.

A few years ago, wildlife photographer and documentarian Isabelle Groc and filmmaker Mike McKinlay were filming an endangered orchid in Chilliwack for the Wilderness Committee when they were introduced to the western toad migration.

“It was a poignant spectacle,” remembers Groc, who thought the sad story would end there.

Then she noticed the people gathered by the side of the road, flagging down cars to educate drivers about the toads, diverting traffic away from the migration route and even ferrying the toadlets across the asphalt in buckets.

It was a scene that perfectly fit with the Wilderness Committee’s awareness campaign for legislation to protect B.C. species at risk. 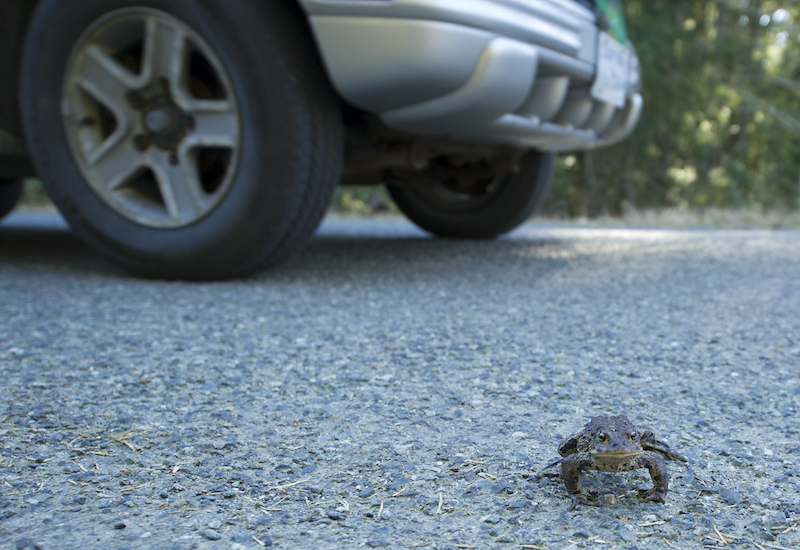 Currently, iconic “Super, Natural” British Columbia has no standalone endangered species legislation, despite being known for its pristine wilderness and having the greatest biodiversity in the country, says Charlotte Dawe, conservation and policy campaigner for the Wilderness Committee.

Dawe notes that in B.C., there are more than 1,900 species and subspecies at risk, left to fend for themselves against climate change, toxic contamination, urban sprawl, logging and industrial development.

Canada’s Species at Risk Act came into force in 2002, but the federal government only takes responsibility for marine wildlife and species on federally owned land. The rest, including the provision of resources, is up to the provinces.

This province is one of four provinces/territories across Canada lacking a standalone species protection law (with Alberta, Saskatchewan and the Yukon being the other three).

The only B.C. law offering some recourse is the Wildlife Act, which threatens anyone who harms animals with a $500,000 fine and three years in jail.

But that legislation falls flat, Dawe says, offering protection to just four out of the 152 species it classifies as being at risk in B.C. That means unless you are an endangered burrowing owl, American white pelican, Vancouver Island marmot or sea otter, the government can’t—or won’t—protect you.

A shift in values

Back in Ryder Lake, the grassroots movement was catching on and citizens were mobilizing to save their backyard amphibians.

“They were so moved by the plight of this little species and wanted to do something to help,” says Groc. “They were the ‘toad people’ and that's how the idea for the documentary was formed.”

Toad People is co-directed and filmed by Groc and McKinlay (below) and produced by the Wilderness Committee. It follows a group of ordinary citizens in B.C. fighting to save the western toad as the amphibians battle extinction and suffer from an ever-shrinking environment. In this province, more than half of all amphibians (frogs, toads and salamanders) are at risk.

It also tells the story of people in communities across B.C. who are taking action to save all types of wildlife in their backyard—whether they’re toads, mountain caribou, rattlesnakes or barn owls.

That strength of communities coming together to enact change is what makes the film so powerful, says Dawe.

In Ryder Lake, lobbying efforts resulted in underpasses being built under the roads, offering the migrating toadlets safe passage. Detour signs during migration times encourage motorists to drive around the toadlets—but many do not and continue to drive over the amphibians. And they still face serious threats from logging and development.

As one resident in Toad People notes, “The only thing that will solve the toads’ problem is our culture to shift its values so that we make room in our world for all these other species.” 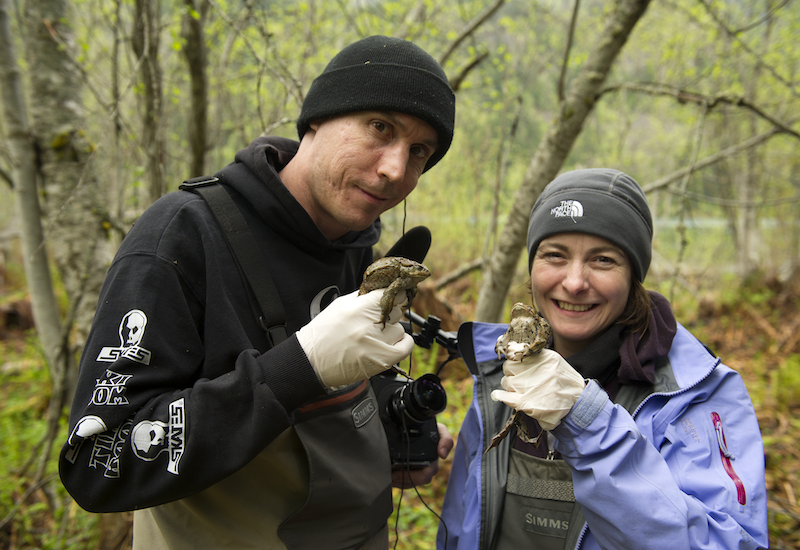 When the filming started in 2013, Groc thought she was telling a story about local efforts to save a species. Then, citizens from Williams Lake, B.C., which is a seven-hour drive east of Ryder Lake, contacted her. They were fighting a proposed logging plan that would cut through the western toad's habitat.

“They thought they were the only ones caring about the toads and trying to do something about the destruction of the toad habitat—they had no idea other communities were caring for toads too,” said Groc.

She also found herself falling in love with the little amphibians. Sure, they weren’t as charismatic as grizzly bear cubs, but they had pretty eyes, a quirky hop and they helped people isolated from nature reconnect with the great outdoors.

“We have so much to learn from toads, they are true connectors,” Groc says. “They undertake these incredible migrations between their wetland and forest habitat. So they remind us of the importance of connecting the habitats, how it’s not sufficient to protect just one. You have to protect integrated habitats.”

Since the documentary’s inaugural screening in 2017, Groc has also heard from communities in the United Kingdom, France and Switzerland where community-led movements are also working to save their local amphibians.

The importance of Toad People was highlighted at the 2018 Wildscreen film festival in the U.K. The Panda Awards program at the festival—known as the “wildlife Oscars”—is where heavyweights such as National Geographic and the BBC compete for prizes.

Toad People was nominated for the Wildscreen Impact Award in the small budget film category.

“We ended up winning the award and we just lost our minds,” says McKinlay, adding he thinks this demonstrates a shift in interest from classic wildlife documentaries about animal behaviour to a new people-animal narrative exploring coexistence.

“It stands out because it’s an accessible story,” she says. “In today's world, we hear so much about extinction and the global biodiversity crisis, and people often feel, ‘Wow I’d like to do something, but I don't know what to do, or where to start, and what difference I can make.’ So there is an appetite for creating hope and solutions that are accessible for people so they can become involved.”

You can make a difference

More than creating hope however, Toad People was also produced by the Wilderness Committee in order to raise awareness about the lack of protective legislation for B.C. species at risk.

For close to 20 years, the Wilderness Committee (which was founded in 1980) has worked tirelessly to raise awareness around the lack of protection. Gwen Barlee, one of Canada's leading environmental advocates, began spearheading the campaign in 2001, when she started as the non-profit charitable society’s national policy director.

Since the documentary’s release there has been some progress, although Groc is quick to point out how the combined effort of organizations and citizens alike is what has propelled progress.

In February 2017, the Wilderness Committee delivered 40,000 signatures demanding change to the provincial government. When the NDP government was elected in May 2017, the party mandated the creation of an endangered species law, which is still passing through the legislature.

But setbacks have plagued the campaign. Barlee died in June 2017 and the province has been dragging its feet moving forward with the legislation. The release of the proposed act’s intention papers, which would outline what the law would look like, have been continuously delayed.

The B.C. government did not respond to a request for comment in time for Megaphone’s print deadline.

Meanwhile, the Wilderness Committee is calling on British Columbians to contact their MLAs and demand the government introduce a species-at-risk law by 2020. Citizens can either write their own letters or go to the society’s website (wildernesscommittee.org) and use the provided contact form to add their voices to the push.

Because, as Toad People shows, change happens when people come together.

“That’s the message of the film,” says Groc. “You may feel you’re on your own and trying to solve those big environmental problems. But if you join together with others and create that community of concerned citizens, you can make a difference.”