join us donate
LOG IN or SIGN UP
Liquid syntax error: Error in tag 'subpage' - No such page slug join
find a vendor
June 20, 2016
by Rosemary Newton follow this author
photos: Photo submitted

Lawrence Paul Yuxweluptun stands in front of his latest work wearing a T-shirt that reads “I am having a bad colonial day.” As an artist and activist, he isn’t one to shy away from articulating unpleasant truths.

A range of 60 of the artist’s works are on display at Vancouver’s Museum of Anthropology (MOA) for Yuxweluptun: Unceded Territories, his largest solo show in 20 years. Throughout his 40- year career he has created landscapes, abstract ovoids, installation and performance pieces characterised by colour. He strives to maintain a strong political undercurrent representative of a man who finds freedom in art to speak about spirituality and to voice his dissent of environmental destruction, and the toxic legacy of colonialism Yuxweluptun’s most recent work, Spirit Dancer Dances Around the Fire (2016) is about the right to be a spiritual person, he says. The large painting features a spirit dancer in a longhouse, transforming into a wolf. The piece is accompanied by a refurbished 1992 virtual reality set that allows the user to venture inside the sacred grounds of a longhouse.

“It is a message to the world that they have tried everything they could to destroy my culture and the way that I pray. I will not get down on my knees and pray to your god,” he says.

“It’s too dangerous to have the bay and 400 tankers coming in and loading up and leaving and no monetary wealth is going to bring back a biosphere,” he says. “This provincial machine is being created so I thought I would give a true rendition of Christy Clark.”

The resulting imagery is a premier with a talon-shaped, blood-red manicure and a forked tongue. He’s studied her, he says, and points out detailed paint work of small birth marks on her chest.

He suspects she’s seen the painting.

“I think this kind of work is a very direct approach,” he says. “If we’re going to say no, you might as well say it in a big way.” 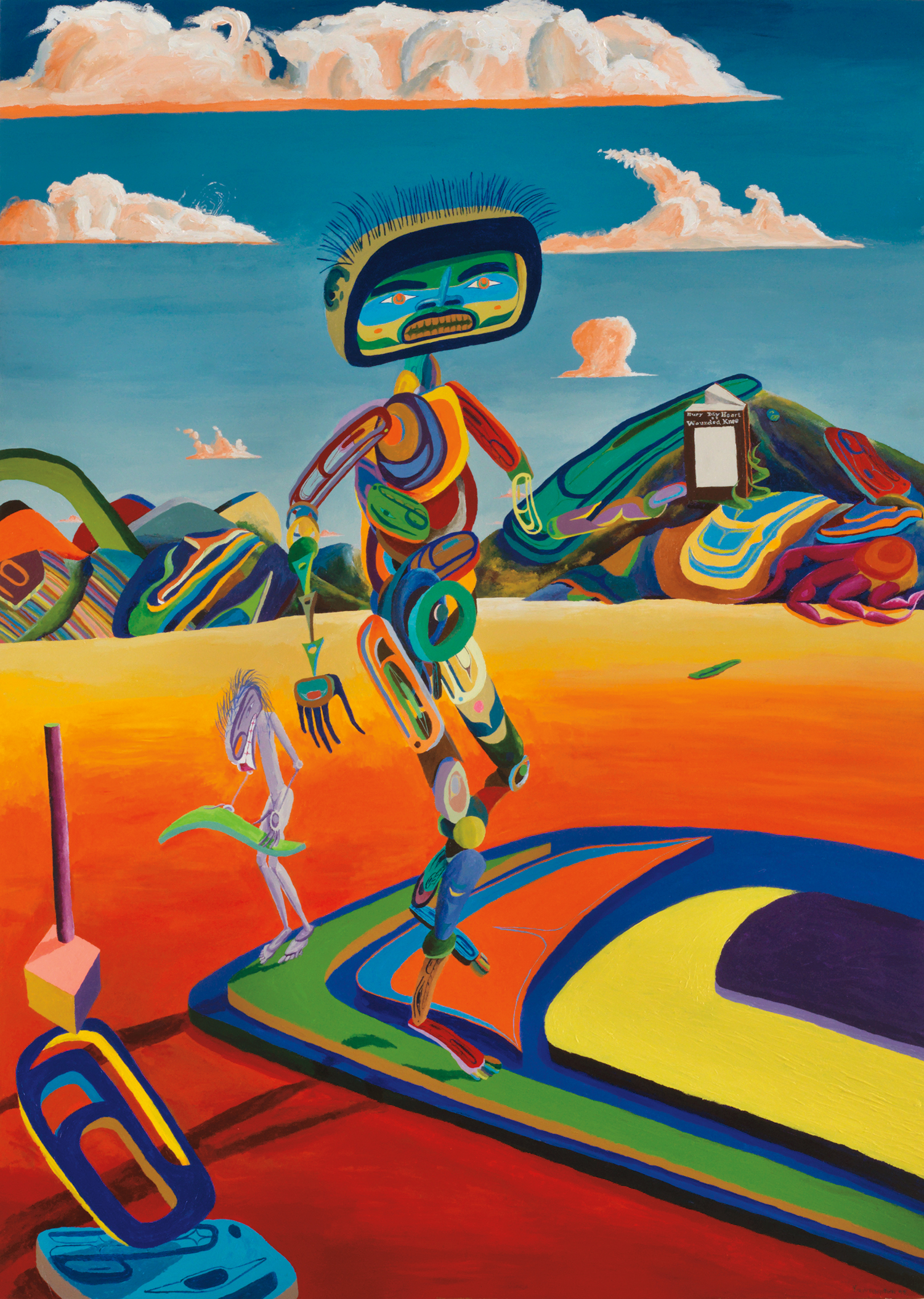 Yes to confrontation
Saying no is a central theme in the series that depicts politicians, corporate moguls and one-percenters, angrily and cleverly calling out their role in environmental destruction and misallocation of resources.

Fucking Creeps They’re Environmental Terrorists (2013), shows three corporate figures spewing oil onto the earth. A suited figure with a black tongue and a Shell logo tie is holding a gas pump, its shape altered to be a phallic symbol.

“Shell is a very destructive group of people on this planet,” he says, adding the tar sands should be shut down. “If you destroy the world, what [you reap] comes back to haunt you.

“How do you exile a whole race of people and limit their rights and then call this country a democracy? Why would you even have the notion?” he says. “Do we continue to oppress aboriginal rights just for the sake of capitalism? Or are we going to say, 'No, I think this is wrong. I think this is too dangerous and we don’t really need oil tankers and we can live without them.'”

Yuxweluptun’s work has never avoided confrontation. That boldness has built his reputation as a respected activist and artist. Of Coash Salish and Okanagan descent, he was born in Kamloops and attended residential school for a few years before his family relocated to Richmond.

He graduated from Emily Carr University of Art + Design with a bachelor of fine arts degree in painting, and has since created an impressive body of work—with art displayed locally and internationally, including at the National Gallery of Canada.

He attributes his voice to his father, a politician, and mother, a political activist and says he has always “had the love of art.”

“I’m just a person that was raised that way, if it’s political, it is, if it’s not, it’s not. There are some days I just enjoy making art for the enjoyment of making art. We have to live with being with ourselves, so being an artist is creative enjoyment,” he says.

Karen Duffek, MOA curator and cocurator of the exhibit, says the exhibit is timely, given increased public discourse of the issues his work addresses and coincides with Idle No More and Truth and Reconciliation. Duffek says his work “represents the land through native eyes” in contrast to traditional landscapes by artists like Emily Carr and the Group of Seven.

“He became so well known for his landscapes, which represented the colonized land with the indigenous figure actively moving on that land,” she says.

An artful voice
Co-curator Tania Willard, Secwepemc Nation, is an artist and independent curator who describes his work as dynamic and charged. He’s known for referencing North West Coast art forms informed by a contemporary art pallet of bright pop culture, his modernism, and re-appropriation of western contemporary art to inscribe his own historical reference, she says.

“He calls them history paintings. He’s painting the history of now, and indigenous issues and concerns globally that affect both indigenous peoples and all of us on the land, environmental issues,” she explains. She started following his work while in art school at the University of Victoria in the ’90s, when a radio show she was working on, Unreserved, profiled his work.

The majority of his works are acrylic paintings, but sketchbook drawings are also on display, many preliminary work to his larger paintings. Intricate drawings of trees he draws in his studio in Mount Pleasant from memory, in a style he says is drawn from symbolism and vision. He calls drawing a developed skill that “teaches you to create.”

His investment in issues took a toll on his health, he says, shown in his story behind his painting Scorched Earth, Clear-cut Logging on Native Sovereign Land, when he visited a shaman.

“My heart was really in pain everyday, and I started to tell him about all these things in the world. Global warming, deforestation, the big ozone problems, rivers being polluted, mines being destroyed, the planet being destroyed and I talked to him about all of these things and he said to me I can fix you. But he said I can’t fix what you’re trying to fix,” he says. “He resolved my issue of not taking it to heart so much, and being kind, and not being mad at the world.”

His approach now is to share the issues and identifies his role as recording history.

“I know that it’s hard for people to look at this work and understand it, but I think in time the translations will come through and the dialogues will evolve,” he says.

Tongue-in-cheek criticism and dark humour define some of his work, like in Red Man Watching White Man Trying to Fix Hole in the Sky (1990), depicting two scientists struggling to mend Earth’s ozone layer.

“This scientist is passing this scientist a screwdriver—that is about as hopeless as we can get,” he laughs, and notes the absurdity of the global process that created a “big hole in the sky.”

A portion of his work is defined by conceptual abstracts. “I am the person that can freely think to say anything that I want in form, style, and modernism, to translate one culture to another culture, to a world,” he says. “If you take a stick of dynamite into someone’s culture and blow it up and put it back together, what does it look like?”

The exhibit includes installation pieces—including video of a piece of 1997 performance art in which the artist shot the Indian Act to demonstrate his opinion on an oppressive policy. Video is accompanied by three rifles mounted on the wall, alongside the act peppered in bullet holes.

Historical brush strokes
An equally haunting and powerful mixed-media piece, Residential School Dirty Laundry (2013), sees piles of white children’s underwear formed into the shape of a large cross. Garments stained with blood are placed at each point, and in the centre is a small plastic cross that reads “for this child I prayed.”

In the preface of Lawrence Paul Yuxweluptun: Unceded Territories—a publication of Yuxweluptun’s work to accompany the exhibit—Larry Grant, Musqueam First Nation elder, writes that he recalls recognizing anguish and anger the first time he saw the artist’s work at the Vancouver Art Gallery.

“I understand the conflict that Lawrence Paul’s paintings are about. And it’s not an imaginary thing— it’s real,” Grant, an adjunct professor in the University of B.C.’s First Nations language program, writes.

“He’s being a frontline activist, trying to throw off the chains of cultural restraint, taking us out of the ancient terminology into contemporary terminology, but still showing the arguments that we have between colonialization and who we are as people.… at the heart of this movement, this resurgence, Lawrence Paul’s art cries out really loud—and really, really clear.” Duffek says MOA has been trying to reconnect knowledge and practice and the items in the museum collection, many dating back to the period of colonialization.

“There’s a connection there with the different kinds of movements, not just with the museum but everywhere, about this process of reconnecting to one’s heritage, and rights and land and languages and many different things that have through colonization been separated,” she says. Yuxweluptun’s work will be on display until Oct. 16. First Nations academics, activists, and leaders will be speaking in the exhibit space on Tuesday evenings until June 21. Admission to the MOA is free for those who self-identify as indigenous.

“I lost something that was taken away by this colonial dream, but I gained something in return. I learned that I could talk to the world then,” Yuxweluptun says. “That yes, I have to direct my attention to the world then. This is what my body of work has been about.”