Using in an emergency

What will come of B.C.’s declaration of emergency over overdose deaths?

A public health emergency was declare for the first time in B.C. this March. Across the province, up to 800 people could die this year alone from drug overdoses—smashing previous records by a wide margin. About 64 people each month have been dying by overdose since January. That trumps the high rates last seen during the 1990s. At that time, someone died from an overdose in Vancouver’s Downtown Eastside almost every day and the city declared its own health emergency.

Too much of any opiate (such as heroin, fentanyl, or oxycodone) slows down a person’s breathing and heart rate. The person will nod out, seem unresponsive, lose consciousness, and without help they can die. Drug users are advised to learn the signs of OD, not to use alone, and to start with a small hit. But with powerful opiates like fentanyl and W-18, it doesn’t take much. 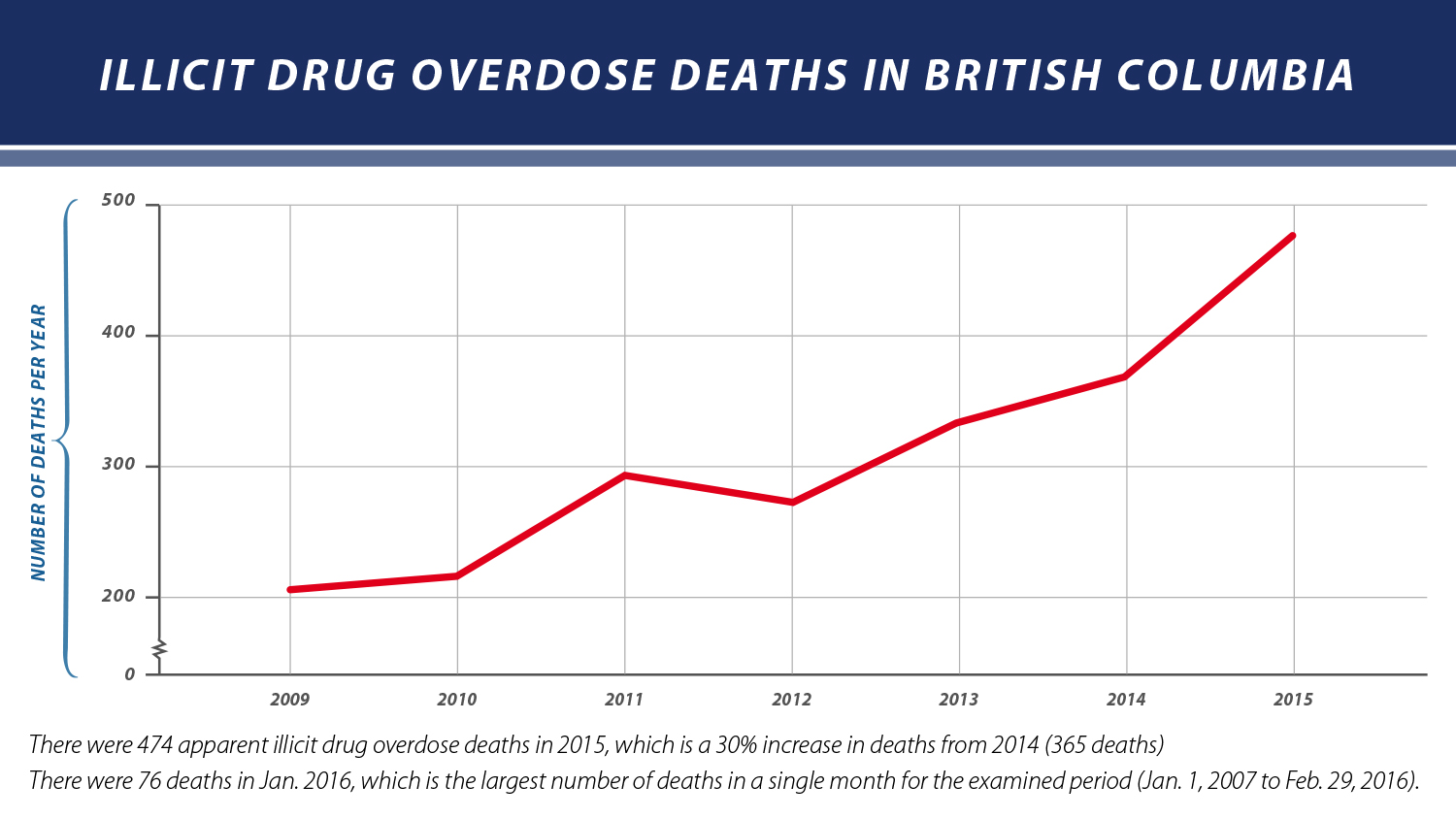 For many, this emergency has been going on for decades. I’m one of them.  Fatal overdoses have torn deep track marks across my life. I’ve tried to recall all those I’ve lost. I stopped counting around 50.

Jonesing for data
Dr. Perry Kendall, B.C.’s provincial health officer, says he declared the emergency because it empowers him to collect real-time data from paramedics, police, hospital emergency rooms, and morgues—institutions that have not always been quick to share numbers.

Kendall says he will be able to see who’s overdosing, where and when. Then, medical health officers across the province can target services to OD clusters.

Dr. Sandra Allison, chief medical health officer of B.C.’s Northern Health Authority, is on board with the call-to-action. But, she notes that they “haven’t quite defined what that intervention looks like.”

Jordan Westfall, president of the Canadian Association of People Who Use Drugs, welcomes the emergency declaration, but as a former drug user he wants more action.

“It’s definitely an emergency,” he says. “We don’t need more research at this point—we know for the most part what we need to do.” He’s calling for more harm reduction services rolled out across B.C.

Westfall worries this data collecting might have a dark side. One health official suggested tracking overdoses among patients being prescribed opiates, and then cutting them off.

“[Patients] could lose a safe supply of whatever they’re taking and [be forced to] go to the street,” he says, noting that risk increases when a user moves from prescribed to street drugs. “It’s a question of human rights,” says Westfall, just back from the United Nations General Assembly Special Session on Drugs in New York.

While the implementation for more safe consumption sites are supported by B.C.’s top doctor, Westfall wonders “how many people die while waiting for that [approval]?”

‘Just Say No’
For Dr. Kendall, safe consumption sites are key to stopping the current spike of overdose deaths. These are facilities where medical professionals supervise drug use and jump in to help if someone is overdosing. Vancouver’s Insite has already helped thousands of people.

Dr. Kendall says the roll out of such sites around the country is being stymied by federal red tape—the former Conservative government’s legislative response after losing in court. “The most important thing is to get rid of the Respect For Communities Act,” he says, “because that was designed by the Harper government to block the expansion of supervised consumption sites.”

The Respect For Communities Act outlines a long list of information that groups looking to open a site must submit to government. Statistics must be provided on loitering, public nuisances, infectious disease transmission, discarded syringes, drug use, and overdoses. The local community must be extensively consulted. The list goes on.

Insite had to prepare one. “It was three-inches thick,” Dr. Kendall says. “It cost them $30,000 to collect all the information and several months to do it.”

Until recently, Health Canada’s website offered advice on “how you can just say no.” The Conservative Party ran an online campaign against safe consumption sites called “Keep Heroin Out of Our Backyards.”

Laura Shaver had a heroin habit for years. She’s on the board of the Vancouver Area Network of Drug Users, and a big booster of Naloxone. “I’ve brought nine people back with Narcan. I always have my kit,” she says, holding aloft a small, kidney-shaped case containing a couple doses of Naloxone, a syringe for injecting it into the victim’s muscle, and latex gloves. I carry the same one, having been trained in its use in 2014.

The red tape
After last year’s election, the new Liberal government signaled a change in direction to an evidence-based approach to drug policy. In January, the supervised injection site at Vancouver’s Dr. Peter Centre received official approval from Ottawa, though it had been operating under-the-radar since 2002.

The country appears ready to move ahead with safe consumption sites. Victoria, Montreal, Ottawa, London, Thunder Bay and Winnipeg all have groups, health professionals, or municipal governments interested in opening sites, including Dr. Allison. “Prince George, being a large hub in the north, is definitely a place that has potential for supervised consumption services,” she says.

But in April, federal Minister of Health Jane Philpott told the House of Commons Standing Committee on Health that she’s not going to repeal the Respect For Communities Act. “The reality is that the extra additional steps the law adds are not considerably greater than the steps that would have been undertaken anyway,” she says. “We believe that it's not an unreasonable bar.”

But Westfall thinks this emergency should trump the Act. “If an emergency power would exempt [all the red tape] that would be great,” he says.

Emergency on reserve
The legacy of residential schools and colonization impacts the health of First Nations in B.C.—including addiction rates. Dr. Evan Adams, the First Nations Health Authority’s chief medical officer, explains how the FNHA uses “special measures” in response to this emergency in reserve communities.

Doctors almost never visit, but these communities have nursing stations, and family members often act as caregivers. “We ask extended families and community workers to help keep an eye out. We train them in how to be careful, how to use Naloxone.”

Some people have to travel hours every day to receive methadone treatment, which requires a prescribing doctor and a dispensing pharmacy, neither of which are to be found on most reserves. “There’s not one community [with this service] that I can think of,” Adams says. But he noted that FNHA focuses “upstream”—looking at well-being and residential school trauma.

Adams started his medical practice in the Downtown Eastside, discovering in 1998 that 40 per cent of the neighbourhood’s indigenous residents had gone to residential schools. “This significant, traumatic event had never been recorded in their medical history,” he says.

There are no data on rates of overdose among the B.C. First Nation population, Adams notes. “We insisted that aboriginal self-identification questions be part of data collected through this declaration of emergency,” he says.

No Quick Fix
Naloxone and safe injection sites can address some of the symptoms, but Dr. Allison also wants to get at the roots. “The determinants of health [include] income, housing, mental health, racialization, discrimination, marginalization, [and] colonization,” she says.

Dr. Kendall says he postponed his plans to retire because there are too many things left to do. And he’s thinking about fundamental changes.

“In Portugal they've actually decriminalized the personal use of all drugs. They have the lowest problematic drug use rates in Europe,” he says. “Maybe we should think about that as a part of the way forwards.”