join us donate
LOG IN or SIGN UP
Liquid syntax error: Error in tag 'subpage' - No such page slug join
find a vendor
May 23, 2013 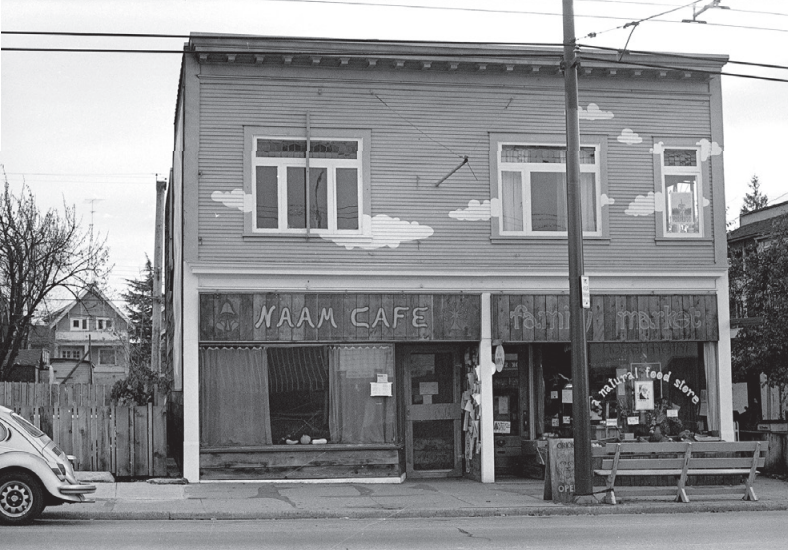 When four conceptual artists set out to produce a photographic map of Vancouver in October 1972, they walked through a very different city than what we see today.

The result was black and white photographs that showed the big city as the small town that it was decades ago. Corner stores with Coca-Cola bottle cap signs and fresh produce out front seemed to populate the streets. The Naam restaurant in Kitsilano, stripped of its contemporary frills, sat on a bare-bones 4th Avenue in a wood-frame building.

The 360 photographs were displayed in grid form on a silk screen.

This month, photographs from both the 1972 and present-day journeys will be showcased together in an exhibition called Background/ThisPlace at the grunt gallery, with an opening reception tonight (May 10).

The 2012 artists, Emilio Rojas, Guadalupe Martinez and Igor Santizo, forged a new, fourth path instead of embarking on the three separate journeys their Background/ThisPlace predecessors did in 1972. Their present-day route intersected with the original artists’ routes, revisiting ideas about Vancouver’s identity and history. They also used video and audio to record their conversations and enhance their photographs.

“We decided to collaborate because we’ve all come from Latin American cities and we wanted to explore this commonality,” said Rojas. “We also didn’t want to re-perform the project exactly and wanted to take a different perspective.”

Part of the new group’s route was to meet 1972 artists de Courcy and Lewis at a 1970s Kitsilano landmark, the Naam vegetarian restaurant, for lunch. The Naam was so chosen because the three original mapping-project artists frequented the restaurant during Kitsilano’s bohemian heyday of the early 1970s. The younger artists later met their artistic peers for dinner.

Artists recorded reflections on the project and the changes to Vancouver during both meals. They also taped conversations with people they encountered on their journey, asking them questions such as “Where were you 40 years ago?”

From there, a new dialogue emerges, reflecting on choices about documentation and how to tell a story about identity, both of a city and an individual.

“We’ve all moved here within the past 10 years, so it was interesting to respond to a piece that happened 40 years ago when none of us were in the city,” said Rojas. “In a way, we’re exploring what it’s like to find our roots and our own personal histories in a place that’s not ours.”

The resulting narratives incorporated not only a portrait of Vancouver, but one of roots and displacement, as well. The original Background/Vancouver was a documentary project of Vancouver’s Intermedia Society, a group of conceptual artists active from 1967 to 1972.

Their cultural “happenings” and performances, usually controversial, occurred in various places around the city. Their works challenged what constitutes as art and focused on the ephemeral.

Towards the tail end of the society, the four artists wanted to capture Vancouver—the city in which the society’s works took place and where most of the artists found their identity. The four longhaired and bearded men set out to map their city in three separate routes.

For the May 2013 exhibit, the original silkscreen mural will be placed on one wall of the gallery. A collage of city maps with audio recordings, the work of the 2012 artists, will be placed on the other wall. In the gallery’s back room, the Media Lab, will hold the photographs taken on the fourth route along with videos.

The final project culminates in an interactive website where people can add their own histories and identities, challenging the selective and often static process of archiving.

Background/ThisPlace runs until June 8 at the grunt gallery. For more information, visit Grunt.ca.