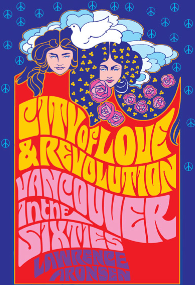 With its boutique clothing stores and high-end restaurants, it’s hard to imagine that Kitsilano’s West 4th Avenue was once the epicentre of Canada’s hip- pie culture. Where lattes and yoga pants now dominate the street, the West 4th Avenue of the 1960s was overrun with longhairs and bellbottoms.

The city’s historical contrast has always seemed very confusing. How could a city that spawned Greenpeace and a very radical Georgia Straight be home to million-dollar condos and a very mainstream Georgia Straight? But perhaps it’s just that one type of middle-class hedonism has replaced another.

While hippies of all ages may romantically cling to the old days, Lawrence Aronsen’s City of Love and Revolution: Vancouver in the Sixties (New Star Books, 2010), breaks down the city’s counterculture history to show that things haven’t changed as much as some may remember.

Deeply involved in the hippie scene, Aronsen brings an insider’s account to the heady days of Vancouver’s late-60s and early-70s. Breaking the book down into ideals, drugs, sex and protest, City of Love does a great job of taking the reader through a detailed history of Vancouver’s hippie culture.

One can see how the city’s early hippies took to the movement’s spiritual idealism, but how drugs and politics began to change both the purpose and the participants. It’s fantastic to read about the Vancouver Free University(which offered a rather hands-on class about being a ‘swinger’), Kitsilano’s Cool-Aid House (which offered short- term care to down-and-out hippies) and the yippie-inspired protests (such as the infamous Gastown ‘Smoke-in’, which is commemorated by artist Stan Douglas at Woodward’s).

While certainly a formative time for Vancouver, Aronsen also has enough distance from the scene to not over- romanticize the times or overstate its impact. Each chapter starts in the United States and shows how Vancouver hippies were really just taking their lead from San Francisco. It also dispels the myths that the scene was that large or serious in Vancouver, that it faced much resistance from the public or police, and that the ’60s sexual revolution was as liberating for women as it was for men.

Finally, City of Love connects the city’s hippie past with its present. While West 4th Avenue may seem very different now, the yoga studios, organic grocery stores and environmental consumerism show just how much in common the Vancouver of the ’60s has with the Vancouver of today.