join us donate
LOG IN or SIGN UP
Liquid syntax error: Error in tag 'subpage' - No such page slug join
find a vendor
February 09, 2012 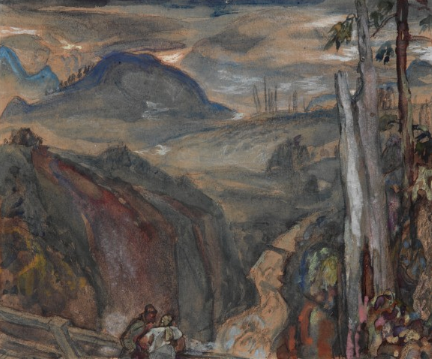 When painter Fredrick Horsman Varley arrived in 1926, Vancouver was an industrial outpost where drunken tugboat captains raced across inlets and loggers and longshoremen found money to be made.

Seeking to foster culture, an ambitious league of citizens committed to a project to create an art school and gallery. And, needing a ringer to bring credibility to the newly minted college, they hired Varley, a “bohemian” member of the esteemed Group of Seven as the founding professor of drawing and painting.

Over the following decade, Varley brought a progressive style, rigorous standards and unique teaching techniques that left a permanent mark on Vancouver through generations of students. His time also included scandalous personal liaisons and swings between high-living parties on Jericho and desperate times in his artist’s cottage in Lynn Valley.

The structures where he lived and worked have disappeared like tea steam amidst decades of change. But when wandering his streets and capturing the same views, you can feel the spark in the artist's eye—arriving in a glorious new place with no predetermined way to be, it's wide open and ready to define any way you choose.

Raised by a draughtsman in England and trained at the same Antwerp school as van Gogh, Varley was an elusive (some say less productive) member of the Group of Seven, and different by any measure: a portraitist rather than a landscape painter, he experimented with colour and form rather than relying on the subdued palette of his contemporaries.

Having explored the Algonquin wilderness with Tom Thompson and painted in the trenches of WWI battlefields, Varley was ready for most anything, especially if it kept him away from a routine of commercial art.

The painter and his son boarded a train west on a grand adventure, leaving wife Maud to hold a sale to raise money to join them. The pair settled first in the Badminton Hotel on the corner of Howe and Pender in the shadow of Holt Renfrew to be close to the new Vancouver College of Applied Art and Design. 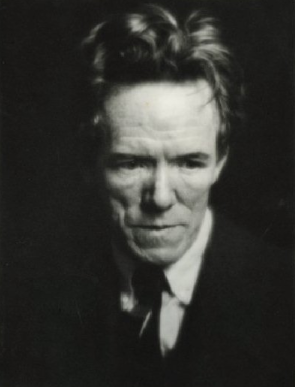 By the time the family arrived, he'd rented a small cottage on then-remote Jericho Beach. There he soaked in the view of the North Shore mountains and inlet, then poured it out on canvas.

He fraternized with students, faculty and artistic-minded folks with late-night frolics drinking wine on a wide veranda and discussing this emerging west coast aesthetic while Varley lithely played classics on the piano.

Varley's inspirational teaching methods and enthusiasm for perfection brought him a loyal following amongst his students who sought his praise and company. The college gained a reputation based on the excellent faculty, but when the depression brought pay cuts, Varley and Scotsman protegee Jock MacDonald set off on their and created the Vancouver College of Art.

Professors visited from Europe, incorporating interdisciplinary studies from abstract performance art to elaborate puppet shows, and included meditation and eurythmics into the curriculum. The school actively reached out to the Chinese community for artists and students with ads in the community newspapers. It also offered studies on First Nations art and artists.

The school took along the most promising students and recent grads, as faculty including the striking Vera Weatherbie, who'd become more than a muse to Varley. At a studio space rented in what is now a leafy West End neighbourhood, Varley painted a defining Canadian portrait of Vera as a peer, clad in artist's smock, paint chunky and broad, seafoam greens and languid eyes, and his signature thumbprint in the corner.

On one of his hiking forays, Varley spotted a clapboard house hidden in the forest in Lynn Valley. Intrigued, he tracked down the owner and agreed to rent it for $8/month, including a piano. Meanwhile, he moved Maud and the kids to a house in Kitsilano, trying to keep up appearances of a regular home life while he spent most of his time in the rustic house at the end of the line with Vera.

But the school’s struggles to stay afloat took a toll on Varley, whose artistic output decreased as the tabs at the topshelf cocktail lounge at the Hotel Georgia increased. As the school went bankrupt and the bills mounted, supplies became scarce. Nevertheless, he embarked on a barrage of masterworks, eschewing oils and canvas for watercolours on torn pieces of insulation paper.

Amidst grinding poverty, Varley found his way, placing humans in nature, intertwined, framing the painting with the subject and evoking emotions through colour. Bridge Over Lynn Canyon is part Chinese scroll, part modernist, with an impossible point of view painted from a second storey window from the house. Dhrana finds a metaphysical state of enlightenment depicting Vera gazing skyward leaning against a ranger’s cabin on Rice Lake.

The director of the National Gallery came to visit the reclusive artist, as did Emily Carr. His paintings were exhibited in major shows, but nothing really sold. Paintings were stranded in London because he couldn’t afford to ship them back. The establishment galleries wanted more Stormy Weather, Georgian Bay-style landscapes rather than the odd looking portraits.

Frustrated and broke, Varley left Maud and the kids, Vera and everything (including 18 months past due rent) and headed back to Ontario into a decade long haze of depression and alcohol. He found a patron who encouraged him to resurface, and he played himself in a short National Film Board piece showing his artistic process: an elderly man with a backpack returning from a hike, hitching into town, buying bread and cheese before starting on a new painting, all while a gaunt but powerful figure glowing from the inside hangs on an easel behind him. The film was called Redemption.

As a founding professor at the college which is now named for Emily Carr, Varley’s artistic legacy lives on through generations of Pacific artists who’ve fused European, Asian and Canadian influences. Despite finding middling success with curators, he inspired and instructed legions of admiring painters.

Tracing Varley’s steps amidst the neighbourhoods in Vancouver where he captured his artistic lightning is to experience something of importance from the seminal days of local art. A slice of the story preserved.

Along a trail which bears his name, amongst the same boulders on the banks of his beloved Lynn Creek, you can almost feel the ghost of ol’ Fred—wooden easel, gazing brush in hand up at the peak he called “the dumpling” and coaxing the spirit out of it all and taming the wild onto canvas.