join us donate
LOG IN or SIGN UP
Liquid syntax error: Error in tag 'subpage' - No such page slug join
find a vendor
November 09, 2021

by Priscillia Tait follow this author
photos: Heart of the City Festival Elder

The extraordinary power of our ordinary lives 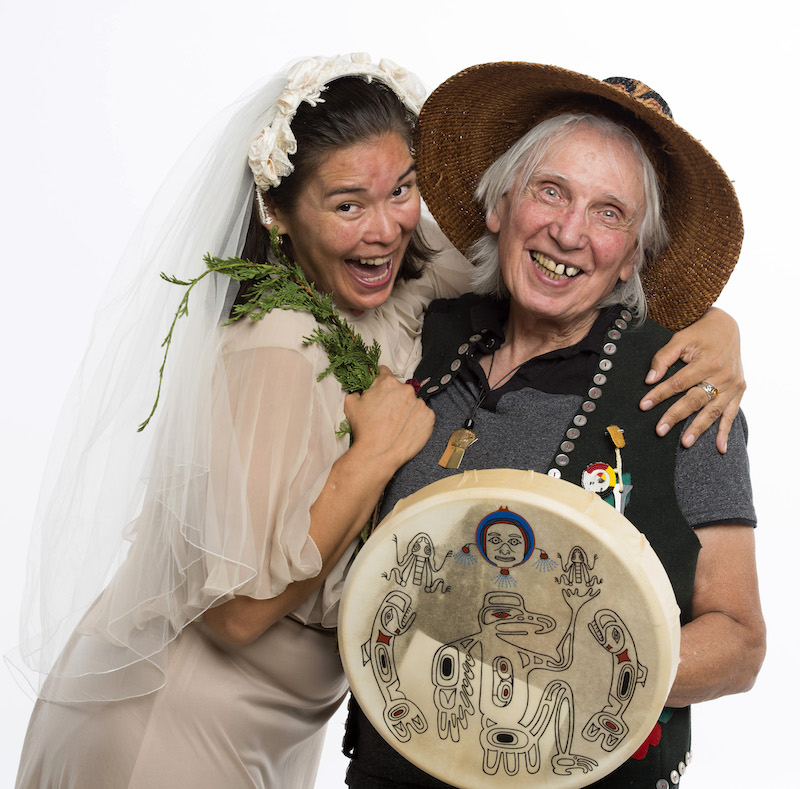 David Cooper photo: Priscillia Mays Tait laughs with the late Haida elder Woody Morrison during a photo shoot for the 2017 Heart of the City Festival. Tait performs in this year's festival as part of Indigenous Journeys: Solos by Three Women.

At some of their potlatch ceremonies, the Kwakwaka’wakw people dance stories of the mystical being Dzunuk’wa, wild woman of the woods. She pops mischievous children into a huge basket on her back and carries them off to her dwelling in the forest, where she will eat them if they cannot outwit her.

One evening when I was a little girl, my paternal Grandma Sarah told me a similar story. Though she smiled slightly as she ended it, the impact it had on me was undiminished. I was too scared to go outside after dark. I didn’t even want to go to the window to draw the curtains, because Bigfoot might be lurking there.

My imagination had been activated to such an extent that one summer day, when a bunch of us kids were playing by the railroad tracks far from Moricetown’s main village and one of them suddenly yelled out “Sasquatch!”, I instantly dropped the rocks I had been happily collecting and hightailed it back to civilization as fast as my little legs could carry me.

The theme of this year’s Downtown Eastside Heart of the City Festival is Stories We Need to Hear. Children around the world have been told tales that effectively keep them close to home and out of danger. As we grow older, we must all face our fears and expand our horizons. We must learn to apply reason and common sense to our lives.

But if we go too far in this direction, if we eventually get too used to simply dismissing the supernatural side of things, we need to hear stories that reawaken our sense of life’s greater dimensions and reveal the larger truths that transcend mere facts. We need magical stories that carry us through the twilight zone to the worlds beyond, stories that enlighten our hearts and enliven our minds—that inspire us to do what we love to do, that give us the courage to truly live, knowing that life Itself supports us through all our worthy endeavours.

When we were older, my dad told my sister a story about how he saw Sasquatch one day while he was walking along Highway 16, not too far from my parents’ house. Although the mystical being was kneeling in the ditch on the side of the road, he could see how huge it was. The smell was distinct and powerful, worse than that of a skunk. This was not something my dad made up in order to scare or entertain anyone. He was simply describing his experience.

He has always been finely attuned to the natural world, caring about all its creatures, and deeply appreciative of how we are sustained by our forests and our oceans. At present, we don’t really know exactly what Bigfoot is, but it would be entirely appropriate if my dad’s strongly felt connection with our living environment led to the manifestation of its spirit in his experience.

In 2012 I had the privilege of being a part of Storyweaving, a production led and performed by Indigenous artists that intertwined stories, poems and personal memories with oral histories, cultural teachings, West Coast dances and the ancient bone game Slahal. The heaviness of topics such as residential schools (my grandparents attended Lejac Indian Residential School) made the project emotionally challenging for me, but I was helped through it by the wonderful presence of Woody Morrison, the phenomenal storyteller who is unfortunately no longer with us, having moved on from his Earthly existence earlier this year.

During rehearsals, he would lighten the atmosphere with his gentle humour. He had a lovely way of making people feel comfortable. When he told stories, it felt like Woody was conversing with you, not talking at you.

His Haida name, Kaawan Sangaa, means “Brings a Special Day,” and he tells a great story during a long interview (on YouTube) about how his name related to the fulfilment of a prophecy in New Zealand.

I got lucky again in May 2017 when I participated in a two-month cedar weaving workshop where Woody told us more stories and taught us some Haida words. He was there when we all had lunch together, and it felt like he was one of us. He told us about being in the U.S. Air Force and his travels during the Vietnam War. One of Woody’s stories was about times before contact with Europeans, when different Indigenous Peoples would invade each other’s communities. The way he told it, a woman might be packed up and ready to go if she felt compatibility with the attackers. But if it was the wrong invading nation, she would scream for help as loud as she could. I thought that was hilarious.

Maybe Woody’s example opened a door for me. Later in 2017, during the She Rises, We Rise theatre project, my imagination gave birth to Chemukh, a Tahltan preschooler being raised by her grandparents. Though inspired by my own childhood, with a focus on my fonder memories, she and her experiences are fictional. Her stories have appeared in writing via Megaphone’s Voices of the Street literary anthology every year since then.

For 2020’s Heart of the City Festival, I made my (online) debut as an oral storyteller describing a family dinner Chemukh takes part in. This year, I was recorded again, performing Chemukh’s Dream, a story dedicated to the memory of my late uncle John Edward Tait, a musical man and jack of all trades who lived in the Downtown Eastside (DTES) for more than 40 years. He had a wonderful smile and somehow managed to stay in good spirits, despite facing challenging circumstances.

There are many talented individuals living in the DTES. The Heart of the City Festival provides opportunities for people to share their gifts and stories in a safe and welcoming space, through words, music, visual art, dance, theatre and more. 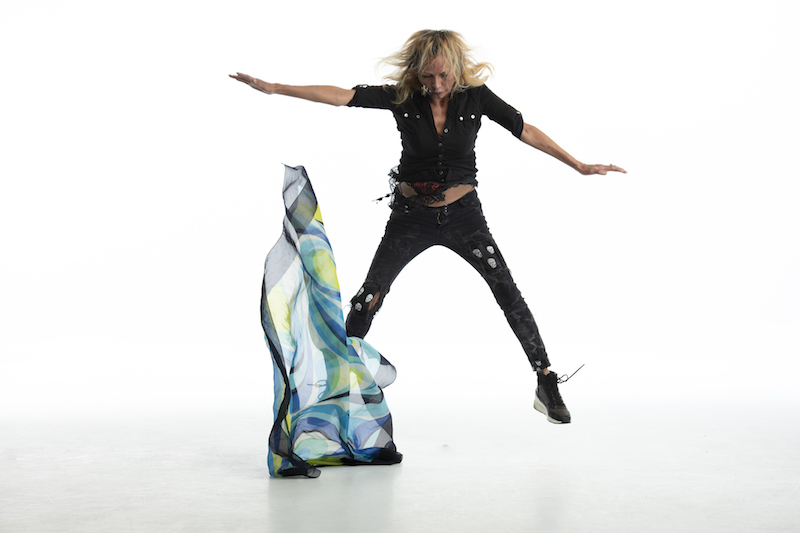 Stories We Need to Hear

2021 Heart of the City Festival highlights

Cheer Priscillia Mays Tait on as she takes part in the 18th annual Heart of the City Festival—which runs Oct. 27 to Nov. 7 and features more than 100 events throughout the Downtown Eastside (DTES) and online.

This year’s festival theme, Stories We Need to Hear, resonates as the DTES community continues to grapple with the impacts of the pandemic, poverty, displacement, the toxic drug crisis and systemic racism.

The 2021 festival features 12 days of live and online events. Festival event info is posted at heartofthecityfestival.com.

• #whatnow – is a multi-perspective documentary theatre and dance creation about the #metoo movement produced in partnership with Good Night Out Vancouver.

• Hearts Beat 2021 – a musical exploration of the shared traditions of drums, dance and song between Indigenous and Irish cultures.