join us donate
LOG IN or SIGN UP
Liquid syntax error: Error in tag 'subpage' - No such page slug join
find a vendor
April 08, 2014

VENDOR VOICES: Another day in the life of Peter Thompson 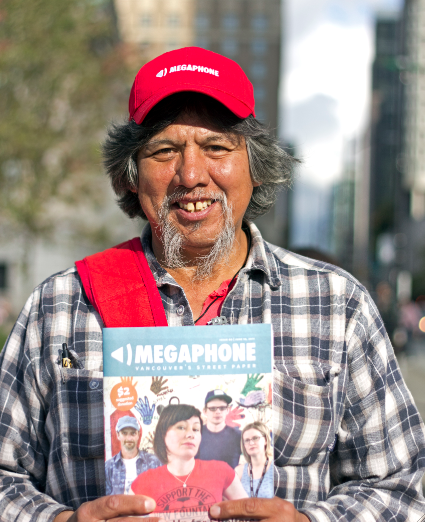 I was first introduced to Megaphone through Hope in Shadows, whose coordinators asked if I would like to sell the street paper in addition to the calendar. I said sure, give me a chance. It worked out very well.

Robson and Howe is where I sell. Every day is a different day down there. One day, a police cruiser pulled up right beside me and sat there for 15 minutes. Then, the police officer jumped out of his car and opened his trunk. He pulled out an assault rifle, got back into his car, turned on the emergency lights, and proceeded on to Granville Street. Then he stopped and waited.

I thought, wow. I wondered what was going down. But whatever it was, it ended peacefully, thank God. No shots were fired and a life was spared.

Summertime is tourist season. The tourists always like to take my picture. “Do they pay you?” one customer asked me. “No,” I said. “When they get back home and start showing their pictures or slides to friends and family and I pop up—that’s payment enough!”

One warm day, I was feeling beat, tired, so I laid down on one of the concrete benches by Robson Square.

I dozed off. When I woke up, I saw my sister walking by. I yelled, “Hey Frank!” She looked, came over, and said, “Where did you just come from?” She laughed when she learned I had been napping on the bench, just out of her sight. She was downtown shopping that day. I told her I’d come around later for supper. It was good to see her—especially because it was a surprise.

Another day in the summer, it was so hot. I decided to move from my usual spot to a shadier location at Georgia and Howe: there was more wind and it was cooler there. On this particular day, I was looking the other way when I heard a big, dull thump. I turned around and saw people running up the street, so I started to run, too.

I’m glad the Creator is watching over me. I pray and thank him every day.

There have been many changes over the years since I’ve been here: old buildings going down, newer ones going up. The old Sears building, for example, is being renovated to make way for Nordstrom.

Some big skyscrapers block out the sun in the winter when I need it the most. But I guess I don’t mind: now I have shade in the summer. And shelter, when it rains, is most important. I’ve also made some good friends who work in the tall buildings.

The new developments that bother me, though, are the food trucks downtown. When I’m really hungry, the aroma just hits you right away and makes your stomach growl even more. Also what bothers me is when it rains, people just pass me by. No one wants to stop: they just want to get where they’re going.

Over the years, I’ve gotten to know many of my customers. They work down here in the nearby places like the courthouse, the nearby lawyers’ offices, the Vancouver Art Gallery, the TD bank, or they’ll just be shopping. Every day they greet me with a smile or a hug and if they have time, they will stop and chat.

My customers give me coffee or hot chocolate, even cookies or homemade desserts. When my friends working in the nearby office buildings have a party, they never leave me out: they bring me a plate of food. Very cool.

My dear customers and friends, I would like to thank you all for being a part of this chapter in my life.

Peter Thompson sells Megaphone at Robson and Howe and, on hot days, down the street at Georgia and Howe.