join us donate
LOG IN or SIGN UP
Liquid syntax error: Error in tag 'subpage' - No such page slug join
find a vendor
December 24, 2012 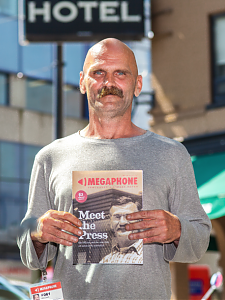 How can we know what our actions will bring? With the simplest of actions we can affect others in ways we can’t predict.

Recently, as the days became colder, the kind-hearted people on my corner where I sell Megaphone brought me a warm jacket more suited for the weather to come. When David brought the jacket to me, he said with a smile that now I was part of the B.C. campus family. It is a campus jacket. I sell Megaphone near BCIT downtown.

I knew David was joking, but he had no idea that those words would trigger emotions and memories that would fill the next few days.

When I was 23, I married my long-time girlfriend, along with her children from a previous marriage. This would be our first Cronk family Christmas. The whole family would be there: aunts, uncles, cousins and their families.

Up to this point in my life, I had built myself a reputation that made my family distance themselves from me. But I was hopeful that this Christmas would be the beginning of re-acceptance into the family.

As my new family and I arrived at the farm where we share Christmas dinner with family, the kids ran off to explore while my wife went to the kitchen with the other women, including my grandma who raised me from the time I was 13.

My cousin Bobby and I went to the barn so he could show off their new tractor. As we started the tractor up Bobby’s dad, my uncle, almost immediately appeared at the barn door yelling, “Get him off that tractor now!” as if I wasn’t even there. Uncle Bob was always my worst critic, but that is another story. I hoped that exchange wasn’t an indication of how the rest of the day would go.

We prepared to sit for Christmas dinner followed by the opening of Secret Santa gifts. Because of the amount of children that year, the smaller ones were left kneeling at the coffee table, including my two boys. I positioned myself so I could watch them and see that everything went smoothly.

As the meal progressed, my four-year-old son accidentally spilled a number of his peas from his plate onto the carpeted floor at his feet. Coincidentally, Uncle Bob had had the carpet shampooed especially for the holidays.

Before my son could squash the peas into the rug, I noticed my uncle grab him by his arm and physically lift him off the floor and drop him a few feet away. By then, I reacted with a verbal assault, and physically placed myself between my son and my uncle.

Before things got physical, my aunt intervened and hurried me out the door with my family in tow. As we were leaving, I saw my grandma looking at me with disappointment.

Later that night, I got a visit from my grandma. She had come to ask me to never attend another family function again. My re-entry into the family was squashed.

Since that day, I never attended another family gathering. As a matter of fact, since then, I haven’t had much contact with any family other than a couple of occasions over 27 years.

Family has become important again. I also now have an extended family, the B.C. campus family, as David pointed out, and all the rest of the folks on my corner whom I have begun to think of as family.

It’s very special to be part of a family like the Megaphone family, or my Seymour and Dunsmuir family.

I hope that this holiday season and with the New Year approaching, we can put aside our family squabbles. Be careful how we talk to one another; what we say to people can stay with them for a lifetime, putting walls between people that we build on until we can’t see over them.

Remember when you tell a small child they are important, they tend to believe you.

So this holiday season, let’s put aside our differences and practice tolerance, forgiveness and turn this holiday into a new beginning, with loved ones who may have gone astray. Let them know that no matter what happens in the future, unconditional love can ease indifference.

Megaphone needs to raise $12,000 this holiday season so we can continue to help support vendors like Kris. With sales trainings, writing workshops and supports, we're able to work with more than 250 homeless and low-income people in Vancouver and ensure they can reach their goals.

We're incredibly proud of Kris and all he's accomplished. He's and a wonderfully talented writer and a popular fixture on the corner that he sells. And all he needed was an opportunity. With your support, you'll be able to provide this opportunity to more people in your community.