join us donate
LOG IN or SIGN UP
Liquid syntax error: Error in tag 'subpage' - No such page slug join
find a vendor
April 04, 2013

Vendor Voices: Peter reflects on the dream of a lifetime 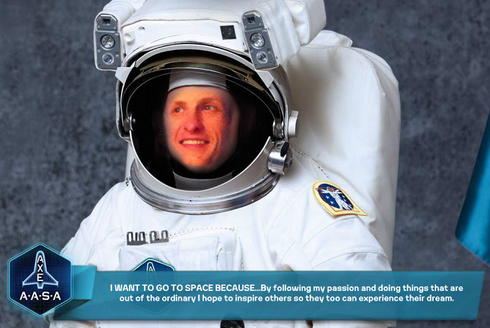 It was a bright sunny afternoon. I was walking along the sea wall and as I got to English Bay I noticed this peculiar man standing there in a space suit, handing out some flyers. I asked him what this was all about. He said his dream was winning a trip into outer space. People could vote for him and he could go if he received the most votes. I said I could help if I put the story in the paper and all the readers could vote and spread the word. His name is Herbert Bossaerts.

Herbert always dreamed of going into space as a young boy, and as a boy, he would read many space-related books. His dad and older brother found it fascinating about how there could be so much diversity among the planets in our solar system. As a young adult, he started to forget about his dream of space travel, until December 2012.

Inspired by his employers’ (Nurse Next Door) Dreams program, he wrote down that he wanted to go into space. Little did he know that a month later the company AXE would start a global contest to send 22 people into space. The first round is all about getting votes. The 120 people with the most votes go to Florida for actual astronaut training. He wants to be one of them.

To show everyone, he lives as Herbert the Astronaut, wearing his space suit every day to work, shopping or any other activity. He will continue for the next seven months until they find out who got in.

His favourite thing about space is that it allows him to expand beyond his current boundaries as a person. To him, space holds all the possibilities that life has to offer. When he thinks of this, he is able to recognize those things that limit him and he can find ways to break through those limitations.

Herbert was born in a small town called Lier in Belgium until he moved to Canada 12 years ago. He also volunteers for Vancouver Adaptive Snow Sports (V.A.S.S.), an organization that teaches students of all ages with disabilities to use adaptive equipment and/or specialized teaching techniques to maximize a person’s independence on the snow. It helps a person feel good about themselves.

Herbert says he encourages people to listen to the voice of their heart and follow their dreams. Dreams turn darkness into light, and they also create something out of nothing. Without them, we are organic robots.

You can support Herbert's dream by voting for him at VoteForHerbert.com, or follow him at Facebook.com/herberttheastronaut.

I’d like to thank you for taking the time to read my story and I encourage you to get family and friends to vote and help make Herbert’s dream come true.