join us donate
LOG IN or SIGN UP
Liquid syntax error: Error in tag 'subpage' - No such page slug join
find a vendor
February 08, 2013

"I grew up in Manitoba. I lived in Ontario. In the early ’80s, there were no jobs where I lived back east. I came out west and worked in mills. We moved the whole family out here. When we first came out, we lived in Port Coquitlam. And then we moved from there to Surrey. 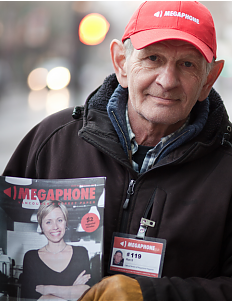 “There were lots of jobs out here. I was working on a chain, pulling finished lumber on and off the chain. It was a good paying job at the time. I worked as a horseshoer, too.

“Now, I can’t really go out and get a full-time, physical job. I have some friends that sell Hope in Shadows. We were having coffee one day, and they just mentioned it to me. So I said, well, yeah, I’ll go see what it’s about. So I went down and I got my free calendar, my license and stuff. And I came up here, to Robson and Thurlow.

“I had no idea what to expect. I did really well in my first year.

“I like talking to people. Here, there are a lot of tourists. I’ve sold to Germany, I’ve sold to the Netherlands and many, many states, Florida, you know. I’ve sold to Great Britain, Australia, New Zealand. The books and the calendars make great souvenirs. It’s a better $20 souvenir than a cap.

“You would be surprised how many of the tourists have walked through the Downtown Eastside looking for Gastown, but they get lost. When they tell me about it, they say, ‘We were trying to get to Gastown. We were scared!’

“Somebody from Australia, they spent thousands of dollars coming to see Vancouver. And I think everybody should know that not everybody lives that way.

“Even these people living and working and shopping on Robson Street: one wrong decision, one bad piece of luck or something, you know, it could happen to anybody.

“I think there needs to be a little more compassion, or a little more understanding. People in the Downtown Eastside have got families. They’ve got somebody that they left behind and loved them. They came from someplace. They didn’t just pop up one day."