join us donate
LOG IN or SIGN UP
Liquid syntax error: Error in tag 'subpage' - No such page slug join
find a vendor
July 25, 2022

The family 'village' is often held together by grandparents

It has been said that it takes a village to raise a child, and it’s easy to imagine a long tradition of Aboriginal grandparents across Turtle Island teaching and caring for grandchildren while parents performed other tasks essential to their community.

In the present-day city of Vancouver, health issues faced by Indigenous parents are a major reason why their own mothers may need to step in and help to raise their daughters’ progeny. 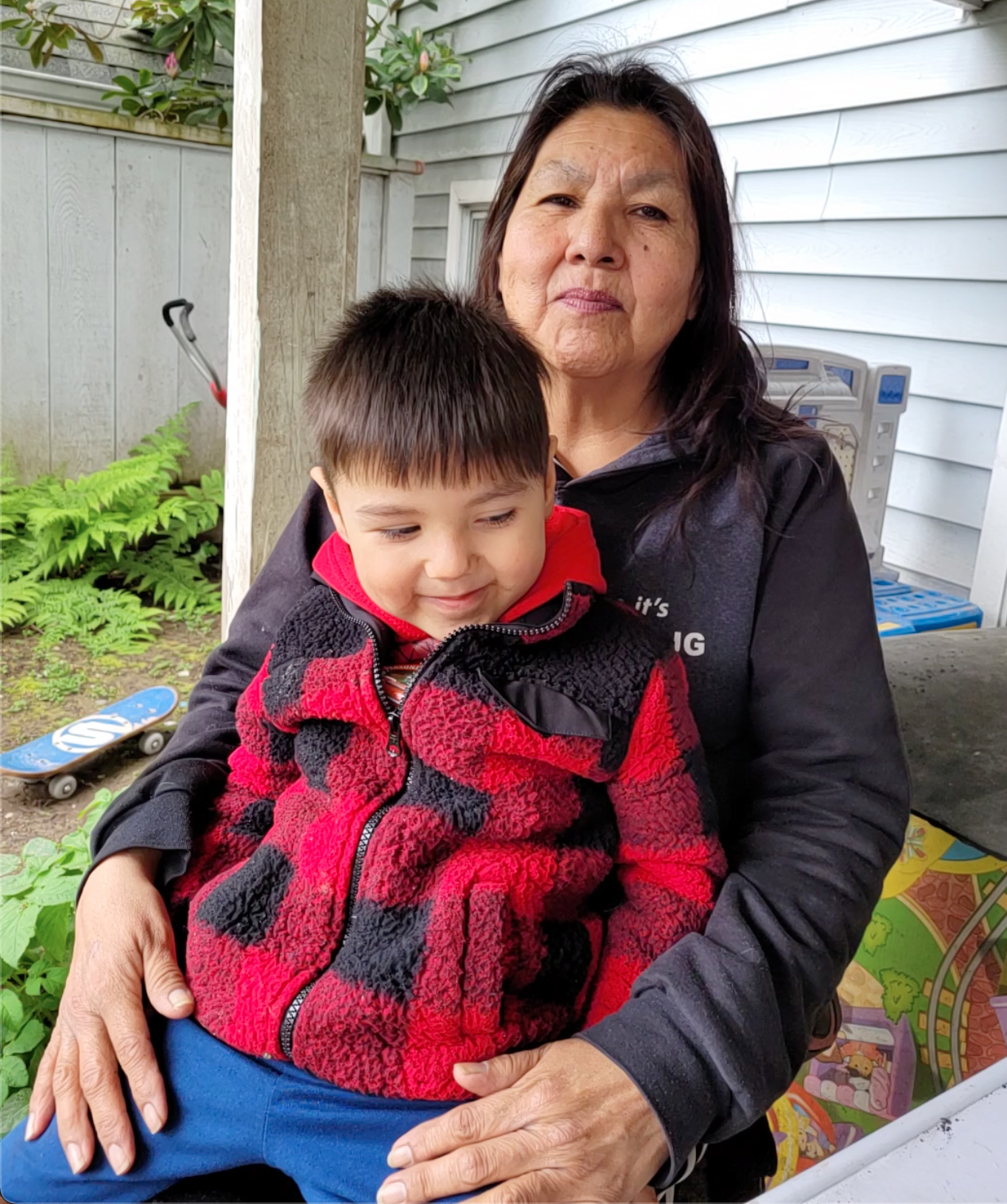 Frances Rockthunder is a Cree grandmother who is raising her daughter’s son, Kayden. Out of 10 siblings, Frances is the only one who was born on the Piapot Reserve, nearly 50 kilometres  north of Regina, Saskatchewan (which also happens to be Buffy Sainte-Marie’s reserve). Frances’ parents and grandparents attended Lebret Indian Residential School, located in Fort Qu’Appelle (50 kms east of Regina), and operated by the Catholic Church between 1884 and 1998. At times, one of Frances’ older siblings was in the care of her grandparents.

As a child, Frances experienced severe physical and emotional trauma. Later in life, additional physical abuse brought her close to death. Here are some words that she wrote, shared for publication with her permission:

“Both [my] parents were boarding school survivors, we all went to day school on reserve. It wasn't easy as I experienced sexual abuse in kindergarten and raped at age 11. But we couldn't talk about it, couldn't cry. We had to keep it hush-hush. I am a survivor of many, many years of physical abuse. I was left for dead five times by losing two-thirds of my blood from hits to the head. By God's grace, He kept me alive. He took away my alcoholism; He healed my wounds.

“In 2018, my grandson Kayden was born. And on my birthday, Jan. 3, 2019, I received temporary custody of him. Best birthday gift ever. It hasn't been easy — I miss getting up and going — but now I had my boy and I had to make changes. I was dealing with two of my kids dealing with drug addictions. In 2021 I underwent double bypass surgery. My daughter Angie took care of Kayden for two months as I couldn't get help from Vancouver Aboriginal Child and Family Services Society for care or to help me when I got home to help with caring for Kayden. So friends helped by taking Kayden. We would go to the Downtown Eastside Women's Centre. I spoke with Crabtree YWCA and they helped by taking Kayden three times a week; now he goes full time.

“Today Kayden is a happy three-year-old.  He talks so much and loves playing with his police and ambulance toys.

"God gave me a second chance at life, and I am forever thankful and grateful.” 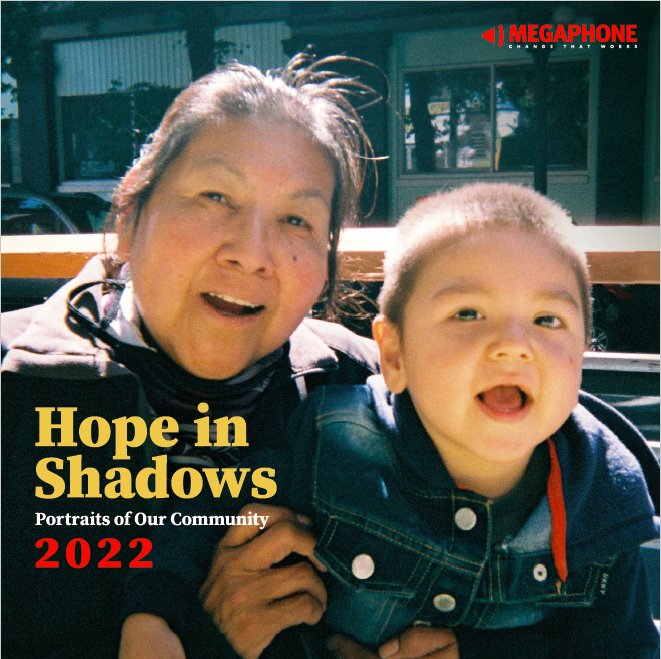 Frances and Kayden are on the cover of the 2021/22 Hope in Shadows calendar. Photo taken by Priscillia Mays Tait

In rural settings, there are often more extended family members nearby who can contribute to caring for the children who need it. 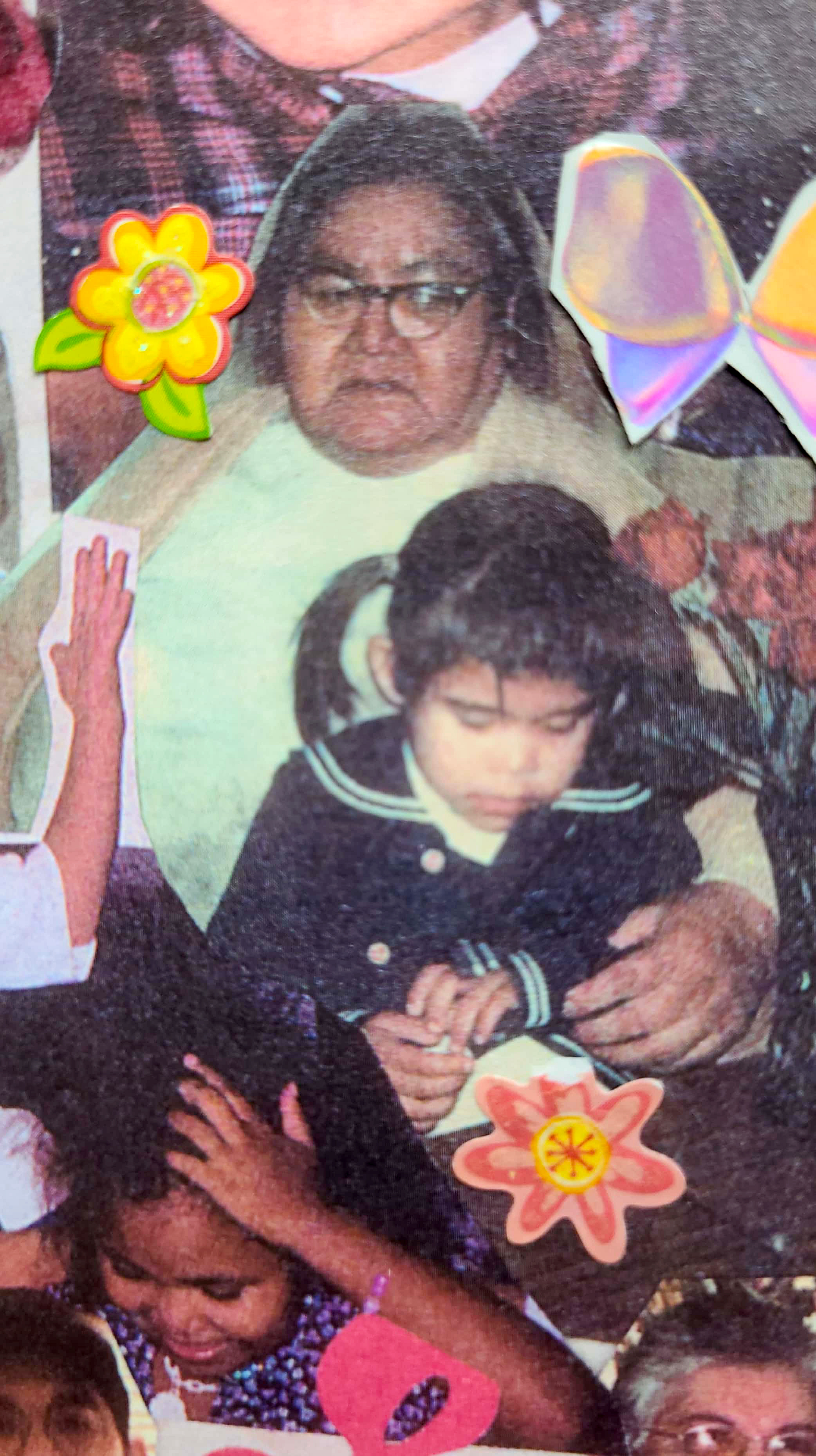 My father, Philip Tait (L”C’Eka: Legah), was raised in the Laksilyu clan territory by his maternal aunt Christine and his uncle John Namox until he was about four years old. By the time he attended day school in Moricetown, he had already learned to speak Wet’suwet’en. English became his second language.

My grandparents, Sarah and Thomas Tait, attended Lejac Residential School, located on the south side of Fraser Lake (200 kms east of Smithers, B.C.), operated by the Catholic Church between 1922 and 1976. After Grade 2, Sarah left school and helped her dad on his ranch. Thomas was Gitxsan, born in Carnaby, but was raised by his uncle in Hagwilget, in Wet’suwet’en territory near New Hazelton. He continued as a student at Lejac up to high school level.

I was born in Hazelton at Wrinch Memorial Hospital. My mother was 21 and I was her fifth child. She fell ill after having me. As a baby, I had pneumonia and an ear infection, and spent three months (off and on) in the hospital in Smithers. When I was healthy enough, my paternal aunts took turns looking after me. When I was about four, I settled in with my grandparents (Sarah and Thomas), who had both already crossed the threshold of turning 60. When I was between five and 11 years of age, they took me with them as they drove all over British Columbia. We went to potlatches, conferences, weddings and funerals, and visited their many friends. I have the fondest memories of those travelling days.

In Vancouver, Grandma would sell her beautifully beaded smoked moose hide vests and gloves. She tried to teach me how to do it, but I was a very energetic child who couldn’t sit still long enough for such painstaking work, though I did learn to knit and crochet. Grandma would buy sweaters at thrift stores for their wool. I loved helping her by winding the yarn around my hand as she unravelled them.

Maybe my absolute favourite thing to do with Grandma was to put my small palm against her large one. As I made the comparative measurement of hand sizes, I would say, “I have this much more to go!”