join us donate
LOG IN or SIGN UP
Liquid syntax error: Error in tag 'subpage' - No such page slug join
find a vendor
February 24, 2016

Megaphone interviews campers residing at  SuperIntent City about their experience

At the foot of justice's door stands a sea of multi-coloured tarps and tents. Here since last November, the tent city on Quadra Street is just outside of the heart of downtown Victoria. Starting with just a few tents, the “Super InTent City” has housed more than 100 campers since its inception. City of Victoria bylaws would ensure that tent structures be removed by 7 a.m. every day, but the courthouse land is owned by the province, so police have no jurisdiction to force people to leave.

In reaction to the tent city, in early January, funding from the province, the City of Victoria, United Way and Our Place came together for a temporary shelter on Yates Street to open its doors until the end of April. Different from other transitional housing, this facility has new tents and equipment inside for campers to use during their stay. But many residents of the Super InTent City see this 40-spot temporary shelter as just that—a temporary band-aid for an issue that requires more than a short-term, small-scale solution.

Megaphone interviewed residents of the tent city on Jan. 10, two days after they received a letter from the B.C. Ministry of Technology, Innovation and Citizens’ Services requesting campers to leave the courthouse property and seek out alternative spaces, such as the transitional shelter on Yates Street.

Residents, along with other community supporters and service providers then held a news conference on Monday, Jan. 11 to push back against the possibility of future displacement.

The following interviews provide viewpoints from three tent city residents on the significance of this community and what steps they think the city and province should take from here. 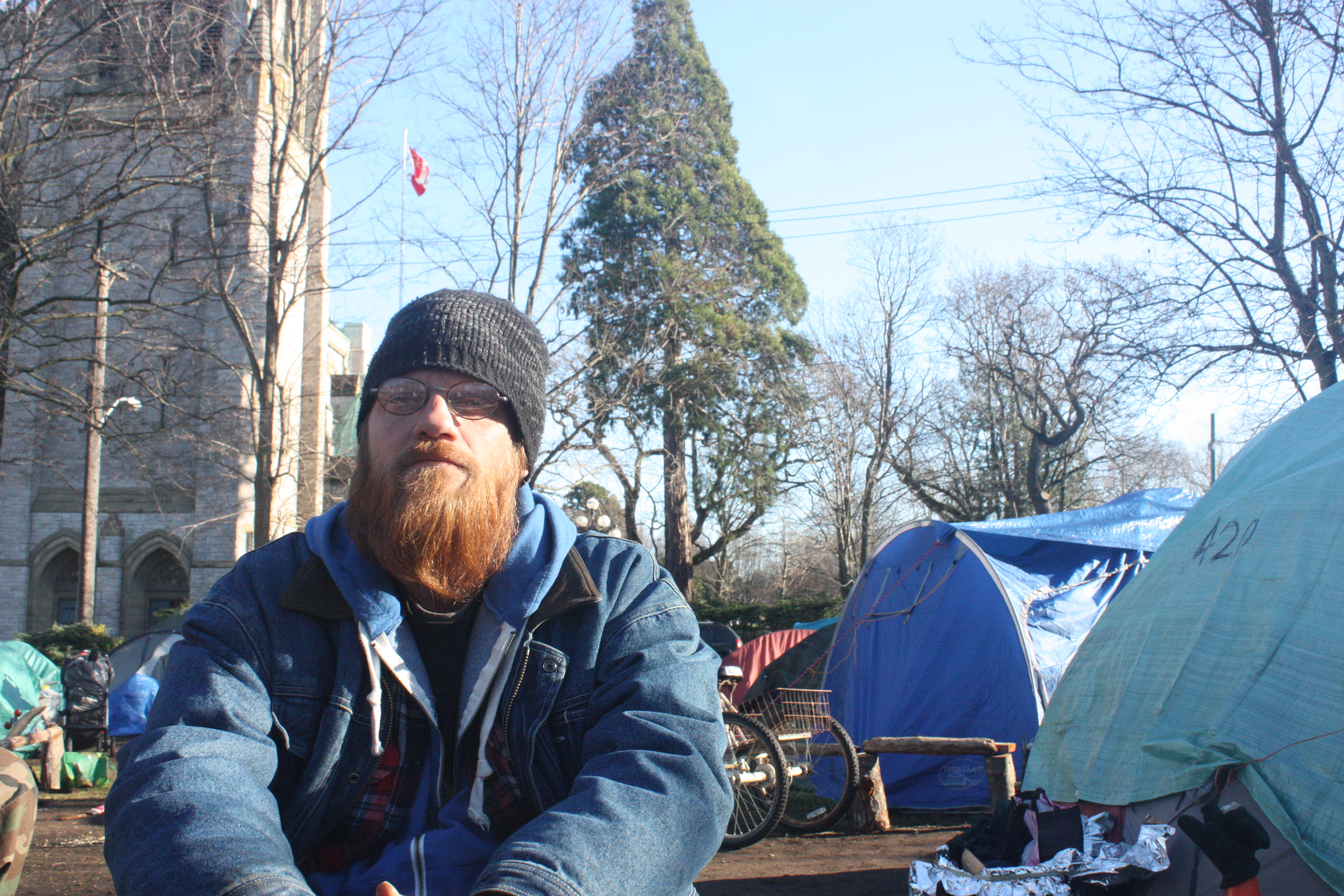 Joseph J. Reville, 44
“I recently returned in the last month and a half to Victoria, but I have been a member of the community in Victoria since the mid-'90s.

“We're focusing on actual problems in our society right now, in Victoria and nationally, which is poverty and homelessness; a lack of affordable housing even though there are empty buildings all over the place.

“There's an empty building at the end of the block behind the diocese. And we can't go there. Enough rooms for 100 people. I think, for less than $400,000, they could have sent in a clean-up crew. So it doesn't cost a whole bunch to go clean up and do what you gotta do for half a million bucks. For $400,000, the provincial government's given us a gymnasium.

“We've established a community here. It's by no means perfect, but we're infusing structure and heart and soul into something after it's come to life. It's different, it's hard, but it's working. We're seeing what starts out as a bunch of people in need taking a stand and setting up tents somewhere becoming an actual funded service that the government and the service providers get behind. And actually leaving the governance to the residents 'cause they've demonstrated that they knew what they were doing.

“It creates the safe, transitional environment that some people need. Shelters don't necessarily address that. Shelters tend to serve the same people over and over." 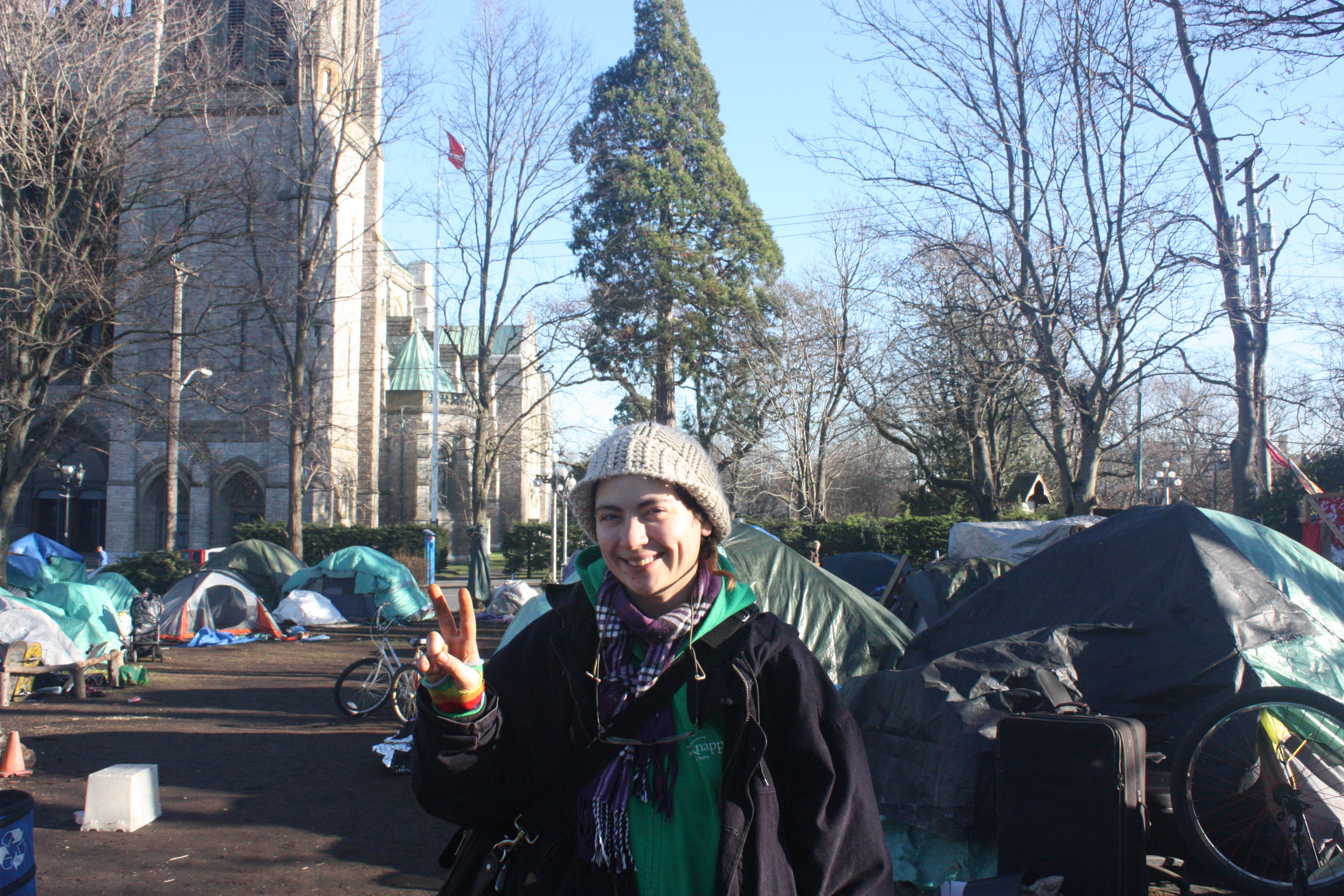 Amanda Paska, 26
“I live on Saltspring, but I've been living in tent city for about six weeks; community, my friends, the cause. I think it's a test. It's a challenge. One of my core beliefs and core values is that you can't choose your neighbours ... you can't choose your brother or your sister. You can choose where you live or where you find yourself. It's my responsibility to recognize what my responsibilities are and to live with respect and treat others with respect.

“What I've realized while living here is that not many of us know how to respect, honour, or love ourselves. It's a lesson in how to do those three things for your self, while watching other people not really paying attention to that aspect of what's going on.

“There's a huge amount of people who are not caring for themselves, even if the care is available here. And that goes down to the foundations. A lot of people are missing the basics, and I'm including myself in this; I don't have a good routine that's healthy. Look across the street, or part of the park, at the government building people who are working there, they definitely have, probably, mental health issues; they're rampant all over because of our system, right, and our country.

“So that's what I'm here for. I'm here to see if there's something that can be done to maybe give the land back to the actual people who are the stewards.

“As a woman, I have four key people I turn to if there's anything that makes me anxious. I have immediate support. I'm not concerned at all. From seeing other women here, it is a very safe place. There is a community and there is a shared desire of security. People are looking out for people here." 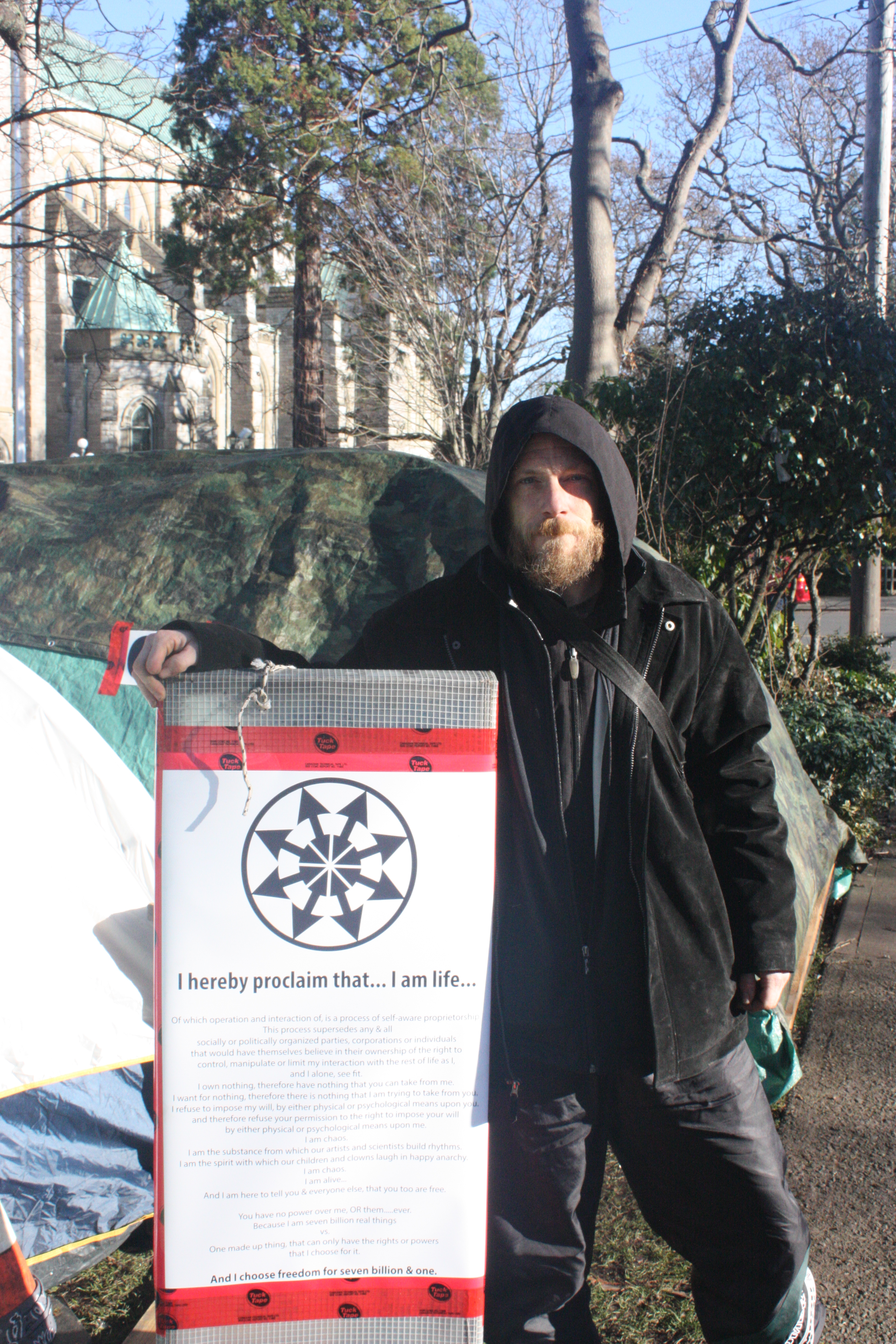 Sherman Sherwood, 40
“I've spent an accumulative of about eight years in Victoria. I was already doing a transient lifestyle by choice and this basically gave me an opportunity to use my voice and help with other people. I love this lifestyle and I don't really have that many problems in it, aside from the hours asked to tear down and set up.

“I definitely feel safer here in a collective. You have people with different talents and abilities helping each other out. It's nice to be accepted as part of community.

“My concern is that it would be a shame for them to actually try to disband this, which they're well on their way to doing. We have an estimated 80 to 120 people in the camp and they have seats for 40 people and they want to disperse the remaining into other seats in other programs around the community. This is just a divide-and-conquer technique.

“Really, what they're missing out on is the fact that we're experiencing a microcosm of what is going on in our larger community. Really, if you want to go right down to it, we could tell what's going on in the world just by what's going on in this camp. Yes, we had one overdose death, but, you know, we had eight in Victoria. How many across Canada? There's no difference. Because the action is here, and the sensationalism is here, the media is like, ‘Jump all over that.’