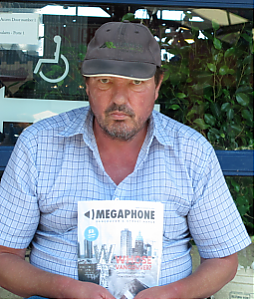 Since the year 2000, Vince has been daily fixture at the Granville Island Public Market, selling street newspapers in the laneway outside the JJ Bean coffee shop. He’s a familiar face in the market community, and he seems to have struck up friendly acquaintances with just about everyone who regularly crosses paths with his spot, where he uses old produce boxes to prop up his papers and a handmade sign.

Vince says he has at least 100 regular customers who purchase papers from him. “I know 'em all,” he says. “I know where most of them live, I know where they work.” The job, he says, has changed him for the better. “It’s tuned up my social skills, just getting to know people.”

Like many important life events, Vince’s initial involvement with street papers in Vancouver began as a happy accident. It was 1997, and he had just moved to Vancouver from Victoria. A former cab driver working night shifts, Vince was forced to stop driving taxis after receiving surgery on his back and ankle. “It was pretty well done by the time I came here,” he says of the surgery. But he needed a job.

He was walking past Vancouver’s former street newspaper headquarters on Homer Street when he saw a sandwich board in front of the office featuring a call for vendors. “I was just walking by. Just a fluke,” Vince says.

He still remembers the first paper he sold as a rookie vendor downtown in 1997. “I sold my first paper at Eaton’s on Granville Street,” he recalls. “I liked it. I liked working for myself.” After a year selling papers at various locations across the city, Vince settled on the Granville Island Public Market as his regular vending spot, where he can be found selling today.

In his 15 years of selling street newspapers, Vince has watched the papers evolve from Spare Change to The Streetto Street Corner and now, Megaphone. The independence and flexible work hours keep him coming back to the job, he says.

His advice to new vendors? “You’ve gotta go where people are shopping,” he says. “It all depends on where the regular customers are.”