join us donate
LOG IN or SIGN UP
Liquid syntax error: Error in tag 'subpage' - No such page slug join
find a vendor
December 09, 2012 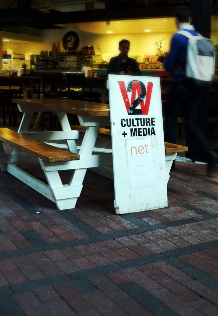 W2 Community Media Arts Society was given a notice of eviction by the City of Vancouver from the Woodward’s building last week that has since been stayed for 90 days while financial restructuring of the society takes place, Megaphone has learned.

A source close to the situation, who wished to remain nameless, first told Megaphone about the eviction notice, which was dated for November 23, for the W2 Media Café space in the Woodward's building. The locks to the W2 Media Café space have since been changed and the organization has laid-off all staff except the events coordinator, including executive director Irwin Oostindie.

Sid Tan, a W2 Media Arts Society* board member, confirmed details of the eviction notice and the 90 day stay.

“I don’t understand why the city’s doing this,” Tan told Megaphone when asked about the notice of eviction. “How come the movement [to evict] is so sudden?”

“It [W2 Media Café] wasn’t making any money,” said Jang. “The business model that was there clearly wasn’t working. That’s what our city staffs and everyone are trying to figure out now: how to reinvent the space, how to reuse the space in order to make a go of it.”

W2 Media Arts Society was launched in 2004, moving into its current 10,000 square foot space, including the W2 Media Café, in the newly redeveloped Woodward's building in June 2011. A former department store, Woodward’s was reopened in 2010 after community activists occupied the vacant site to secure social housing from the province, which has been acknowledged as a catalyst for the Woodward’s redevelopment.

Since moving into its current space, W2 has employed several Downtown Eastside residents, describing itself on its website as “an artist-run, globally networked media arts lab, incubator, community meeting space and social enterprise cafe serving artists and residents of the Downtown Eastside and Vancouver.”

An emailed statement from Brenda Prosken, general manager of Community Services at the City of Vancouver, confirmed the financial restructuring: “The W2 arts and media umbrella is an important model that can benefit many small arts groups and media services. The board of W2 has indicated a need for an economic and organizational renewal,” she wrote.

“We support the move in a new direction that provides a sustainable model to serve the organization and community. We are reviewing their tenancy with them and have invited them to come forward with a new proposal.

“The City wants to ensure the W2 business model supports their continued operation as an umbrella for the City’s small arts organizations and media services. We are committed to the success of the City’s arts groups.”

When asked if the city had issued an eviction notice to W2, city communications staff referred Megaphone back to Prosken’s statement.

However, a meeting is scheduled to take place on December 11 to determine if the W2 Community Media Education Society board members overstepped their bounds in negotiating the stay of eviction terms.

“I don’t think they [the W2 Community Media Education Society board members] are allowed to do that, that’s why we’re having this meeting,” said Tan, who, as a Café board member, was not part of the negotiation for the stayed eviction.

“While the mayor was at W2 giving speeches and having photo ops, his staff is trying to evict us,” said Tan.

Tan says W2 is the social amenity of Woodwards that enabled developers to build more and higher buildings than zoning restrictions allowed.

“We fail, the Woodward's plan fails,” he says.