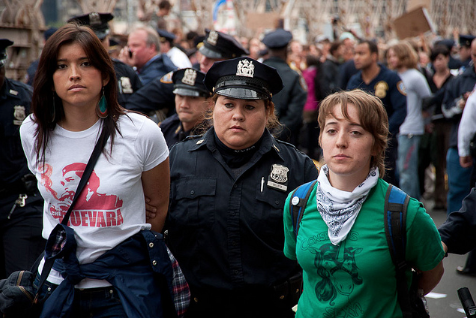 Entering their fifth week of protesting, the Occupy Wall Street protesters are finally being taken somewhat seriously and getting substantial media coverage. In case you haven’t caught wind yet, #occupywallstreet is the brainchild of Vancouver based, anti-consumerist magazine Adbusters who proposed the idea back in July after being inspired by the Tahrir protests in Egypt.

Since September 17, peeved off American citizens have joined in solidarity in Lower Manhattan’s Zuccotti Park to protest peacefully against social and economic inequalities between the working class (99 per cent of the population) and America’s corporate greed-heads (a whopping 1 per cent of the population). To get an idea of demands the protestors are pushing, and what they’re speaking out against, check out the official website that’s up and running.

The public outcry has inspired sympathy protests which are sweeping the nation and crossing over the border to our own stomping grounds here in Vancouver, as well as across Canada. The Occupy Vancouver protest took up camp at the Vancouver Art Gallery this past Saturday, October 15th, resulting in the general feedback that the protesters need to form a more focused and unified campaign.

Going back to the Tahrir revolt being the initial spark to Occupy Wall Street’s flame, the two protests are frequently compared in the media. While the source of Adbusters’ inspiration makes logical sense, I personally don’t agree with the media using the comparison seeing as how Tahrir’s people  are fighting for their freedom and we don’t face anywhere near that level of oppression.

But I do absolutely agree that corporate greed should be protested against and brought to a justified end. I therefore hope this movement finds a more unified voice in order to focus their energy, move forward and result in the necessary socio-economic changes that are far overdue.