join us donate
LOG IN or SIGN UP
Liquid syntax error: Error in tag 'subpage' - No such page slug join
find a vendor
February 03, 2011

Towering over the western entrance of East Vancouver is Ken Lum's iconic 'East Van cross'—a powerful neon notice to all those who enter about the neighbourhood's stature. The cross has become a symbol of East Van's gritty past and cultural future. 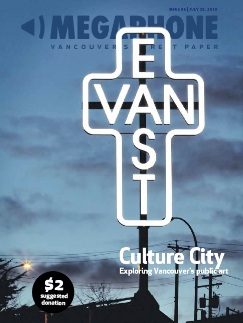 For anyone who lives in East Vancouver, the monument is a source of pride—a bold reminder to those on the west side of the city that while they may have more financial capital, East Van is still the soul of the city.

(And a not-so-subtle nod to the neighbouhood's toughness—the symbol was supposed to have been once used by either the Riley Park or Clark Park gang.)

As Lum gets set to open a 30-year-retrospective of his work at the Vancouver Art Gallery, the above video gives a behind-the-scenes look at how the 'Monument for East Vancouver' (featured on the cover of Megaphone #58 — Culture City: Exploring Vancouver's public art) came to be and why the cross is such an important signifier for the neighbourhood.

"It's about that divide [between East and West], obviously," he tells The Georgia Straight, "but it's also about travel across time, across space, in the city by different peoples."

Ken Lum's exhibit at the VAG will run from February 12 to September 25.