join us donate
LOG IN or SIGN UP
Liquid syntax error: Error in tag 'subpage' - No such page slug join
find a vendor
November 13, 2012

Wheels of Change: Cycle Back graduates build a bright future on two wheels 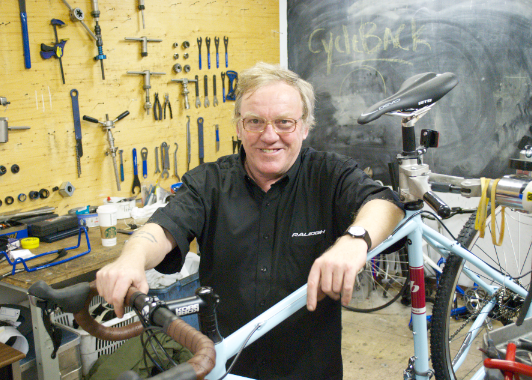 
If you’ve ever hopped on a bike and ridden the seawall or bombed some hills in lumpy Vancouver, you’ll understand that cycling and good mental and physical health are tightly linked.

When Rob MacDougall was working at Vancouver’s Lookout Emergency Aid Society, he became well aware of the connection. In 2009, he fostered a partnership between Lookout and the people and resources at Mighty Riders, a Vancouver bike repair shop. They came up with a program that provides people who are at risk of homelessness an opportunity to learn about bike repair or eventually become a bike mechanic.

Once the program was up and running, the connections within the biking community kept growing. The Pedal Depot, a bike recycling and repair shop, signed on to donate bikes for Cycle Back students to work on and then sell the mended bikes back out into the community. Lani Johnson, Cycle Back’s coordinator, says that the program has had far-reaching effects. “There are graduates from the program working in bike shops all over the city,” she says.

Thinking about Cycle Back’s many successful program graduates, Johnson emphasizes how impressed she is by some of the students’ dedication and perseverance. “One student took the class and was so passionate about bikes but had trouble picking up the skills. So we connected her with Our Community Bikes where she volunteered for about a year. Then she took the class again, and after that we were able to connect her with a work placement at Mountain Equipment Coop, where she was eventually hired on.”

But Johnson is nervous about the future of the program as funding is starting to run dry. “We are looking for new partnerships and trying to be creative in finding ways for the program to become self-sufficient,” she says. Start-up money originally came from the City of Vancouver’s Legacy Fund, as well as from fundraising efforts and a myriad of other partnerships.

While the program’s future hangs in the balance, Johnson is hoping that something will work out in their favor. “We just love seeing people who wouldn’t have many opportunities otherwise actually connect with an area of passion and make a new life.”

The Cycle Back program runs year round in eight-week sets, covering everything from different brake systems to suspension. The students come out with employable skills and a network of support behind them to find a job.

“I love this program, I’ve seen so much good come from it,” Johnson says. With more than 400 kilometres of bike lanes in the city, a thriving bike culture and many biking subcultures, Vancouver is one of the most bike friendly cities in North America. There are an estimated 60,000 trips made by bike every day, which means there are a lot of bikes on the road. Perhaps the best candidates to handle their repair are people determined to better their lives through bikes.