Why Riot in "The Best Place on Earth"? 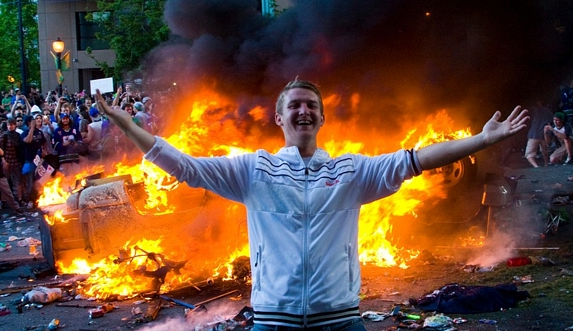 I have to admit I was taken by surprise. When asked if there would be a riot after Game 7 of the Stanley Cup final, I said, “No, conditions just aren’t right, there’s not enough anger out there.” The anger I was referring to would be the anger directed at the police and the government. In short, the authorities. I was wrong. It seems there was no shortage of anger. But then, I also thought the Canucks would win the Cup.

Ask yourself this: Are your economic/political interests the same as Wynne Powell’s (President and COO of London Drugs)? If yes, stop reading. For me the question that remains is what is the source of the anger? I don’t buy the theory that losing a game results in such rage. The bad apple theory doesn’t hold water nor does mob mentality. Too many bad apples, not enough mob. So where does the rage come from?

Here’s my theory. British Columbia has just come through the most vicious 10-year cycle of class warfare waged by the BC Liberal government under Gordon Campbell. The election of a new leader in the person of Christy Clark promises more of the same in a new “family friendly” style. What is the evidence? Here are the lowlights: 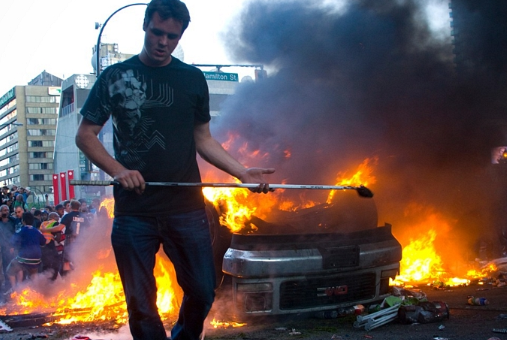 Between 1989 and 2008, the richest 10 per cent of B.C.’s families with children saw an average gain in their annual income of $84,713 or an astonishing increase of about 52 per cent. Meanwhile, the bottom 40 per cent saw their average annual income drop by more than 4 per cent, or an average loss of $6,909.

There’s a word for all this: revanchism—revenge against the poor. The rich fuck up and the poor pay. That is the primary lesson to be learned in the post-capitalist era. When I say poor, I mean working class. And when I say working class, I mean anybody who does not profit from the labour of others.

Twenty thousand inside the arena, 100,000 outside and a few “looters” chanting “Fuck the HST” as they redistributed wealth while others attacked private property, smashing windows and burning cars.

Was it organized? No. Was it focused? Not really. Will the “authorities” do everything in their power to misread the rage? Of course—in our one-party system (they’re all capitalist), there is no room in the public discourse to even question the inequalities that are endemic to capitalism. In the words of Margaret Thatcher: “There is no alternative”.

The rich will get richer, the poor will get poorer. Just remember the words on the bumper sticker: “If you don’t riot you can’t complain.”

Michael Barnholden, author of Reading the Riot Act: A Brief History of Rioting in Vancouver (Anvil Press 2005), is associate director of Humanities 101 at the University of British Columbia, member of the board of the Kootenay School of Writing, and managing editor of the literary magazine West Coast LINE.