join us donate
LOG IN or SIGN UP
Liquid syntax error: Error in tag 'subpage' - No such page slug join
find a vendor
July 28, 2011

Wise Council: A plea to clean up the slumlords in the Downtown Eastside 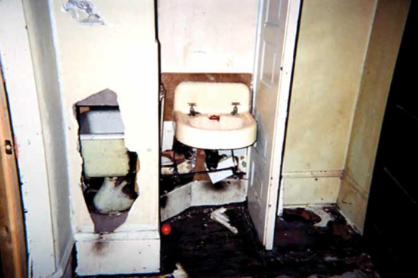 Inside one of the rooms of the the Wonder Rooms hotel (50 E. Cordova St.)

On June 30, 2011, Vancouver city council heard testimony from residents of the Wonder Rooms on 50 East Cordova and the Palace Hotel on 35 West Hastings Street, both owned by George Wolsey. What follows is text from a speech delivered by Don MacDonald, a Downtown Eastside resident and community activist. After the testimony, city council voted unanimously in favour of seeking an injunction against the buildings’ owner.

“I would not make this speech if even half the millions upon millions of dollars you people invested—your word, in- vest—in a mindless jock culture was spent on less frivolous things like social and economic justice, and finding a way to produce decent affordable housing.

"I have a very personal interest in how the tenants of the Palace and Wonder hotels will be treated. I live in a crumbling, century old, wood frame SRO (single room occupancy hotel) with rotting sills, floors that roll like the ocean and plumbing that clogs or bursts every couple of weeks. The noise levels make regular sleep impossible, and the place is laced with old galvanized steel gas lines that would rupture in even a moderate earthquake.

"Our landlord does make an effort to fight off the rats and bed bugs and keep it all lashed together, but I expect it will be torn down in the next couple of years if it doesn’t fall down first. My only real other option is a bush camp or other “illegal” shelter. If business and government refuse to build minimal, inhabitable, affordable housing then it’s my fundamental right to provide my own. I will not be victimized by greed addicts or dehumanizing charity.

"I thought I knew how bad the downtown SROs were until I heard the stories of people from the Palace and Wonder: disease bearing cockroaches eating people’s scabs and sucking moisture from the corners of their eyes and mouths while they sleep; bed bugs and the risk of flesh-eating bacteria; the rat that burrowed into a mattress and died; water or heat shut off for protracted periods; one working shower for 25 people; blocked fire escapes; bogus room numbers and doubling up; social workers and building inspectors denied access; a blind woman trapped in this squalor; slumlords allegedly forcing tenants to buy stepped-on methadone; alleged threats and violence against tenants; and tenants afraid of being murdered with spiked methadone.

"What we have here are addicts—trapped by poverty and a landlord who controls their methadone—trying to work recoveries in hellish, subhuman conditions that would drive anyone to drugs or suicide, while those in power have shown, at best, a callous lethargy. If I fail to pay my fines I’ll go to jail. If I’m perceived to be a threat to others, I’ll get red zoned. Why do your laws not apply to rich slumlords?

"I’m justifiably suspicious of this city’s habit of ignoring maintenance violations until they reach such a crisis that the building has to be evacuated for renovation or demolition. I believe it was the Dundas Hotel where the tenants were given next to no notice of eviction and two of them subsequently committed suicide. The despicable cowards responsible for this classic poor- bashing have never shown the slightest remorse. We Downtown Eastsiders are not saints; we’re more like sick and dying canaries at the bottom of the laissez faire coal mine. But instead of asking what’s wrong with the mine, the owners only want to beat up the canaries. It’s always the stick—no carrot, no sane alternatives.

"When landlords fail to do proper maintenance and the city fails to enforce its building standards, the tenants are not to blame and don’t deserve to be punished or abused. I will not be alone in my contempt if you don’t fix this mess before the next election, and I’m sure the legal pit bulls at Pivot, God bless them, will be paying particular attention to what unfolds. The Palace/ Wonder scandal is so outrageous even the corporate media might awake from its slumber.

"Conversely, if council starts getting the big picture and taking the right, small actions—like finding these poor devils healthy, managed housing and dealing with their tormentors—I will be the first to give a nod of approval.

"Ignore the poor-bashers and do the right thing. Decent people will give you credit."