join us donate
LOG IN or SIGN UP
Liquid syntax error: Error in tag 'subpage' - No such page slug join
find a vendor
May 11, 2017
by Quinn MacDonald🌹🌲 follow this author
photos: Caroline Gillis in Alice Munro: Stories. Photo by David Cooper
feature

In her introduction to Selected Stories, 1968-1994, Alice Munro says a story is more like a house than a road, something you can wander through and rediscover.

And she would know.

The Canadian author is credited with mastering the short story genre, has won about two dozen awards, and has penned 14 acclaimed short story collections.

Directed by Anita Rochon, the play features Munro’s Differently and Save the Reaper, but they aren’t adaptations—the plays follow her stories word-for-word.

The company had performed two Munro stories in San Francisco and brought the show to Toronto in 2015. Their artistic director contacted Belfry artistic director Michael Shamata about bringing the show to Victoria. Instead, Shamata asked for Word’s blessing and advice so the Belfry could create its own Canadian version. 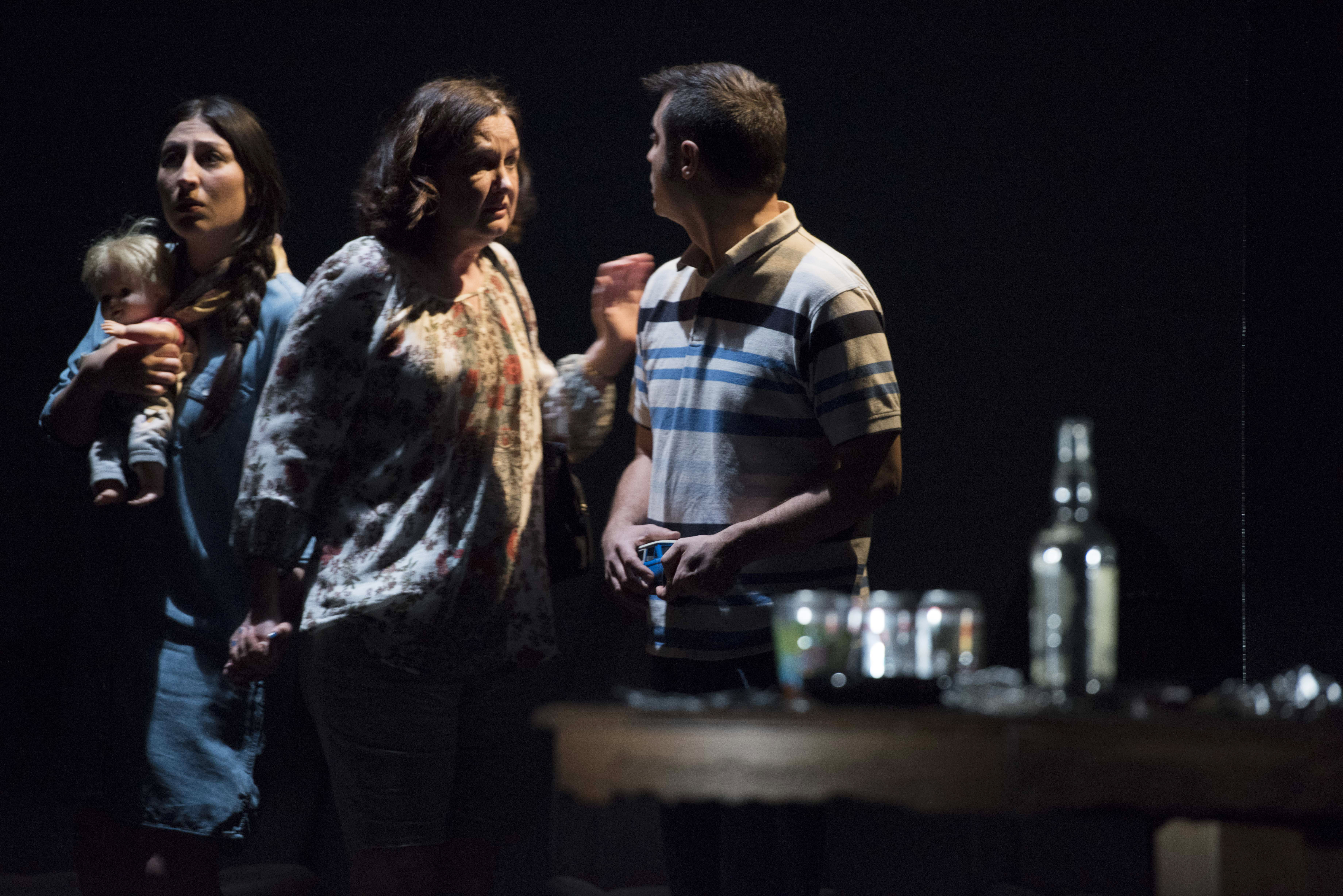 A blank stage
Originally from Ottawa and based in Vancouver, Rochon says she loves Munro’s writing and was excited by the challenge of putting such “rich work” on stage when Shamata asked her to direct. Rochon, who graduated from the National School of Theatre in 2009, has a youthful face and impeccable posture. She generally focuses on new or classical works and says Stories functions as an intersection of the two.

“The language is heightened, and yet we’re essentially making two new plays,” she says. It was important to give the audience two markedly different experiences. Differently is staged in a hospital room—where the orange-and-white and blue-and-white walls mimic the vintage Penguin book covers mentioned in the story—and centres on a middle-aged woman in a hospital bed. To make it clear, the play is “word for word,” it begins with the act of reading as the attendant husband picks up Alice Munro’s book and starts reading to help his wife pass the time. The play evolves from there with different actors flitting off and on the set, narrating the story and performing dialogue for a variety of characters.

With no written directions, Rochon had to decide how to stage the narration and dialogue. She becomes animated when explaining her process. “We had to figure out for ourselves who was saying what line, and how that would best serve the story, and how that would best fit the container that we’d chosen, and then of course there’s the challenge of how do you do narration? Do you endow it with the character’s concerns?

I’m really worried and then suddenly I’m back to the audience.’ So it was navigating those moments and I would say we found our own language in both pieces.”

Save the Reaper is staged more conventionally with direct address to the audience and a shared narrative approach. The powerful sound and lighting and minimal-but-effective set design immerse the audience in the strange, suspenseful story—published in 1998, late in Munro’s career. According to Rochon, the props needed to be specific enough to match the detailed writing, but abstract enough to work for multiple settings.

“What members of the Belfry’s audience are going to find—no doubt to their surprise—is that they are watching an entirely new art form,” Douglas Gibson,

Munro’s long-time editor and publisher and a consultant for Stories, said in a statement. “This is not like the simple reading aloud of a bedtime story, although it shares some of those deep, long-forgotten pleasures. Nor is it a simple, on-stage series of scenes, or sketches that amount to a play. It is something in between, a fascinating new, blended art form.” 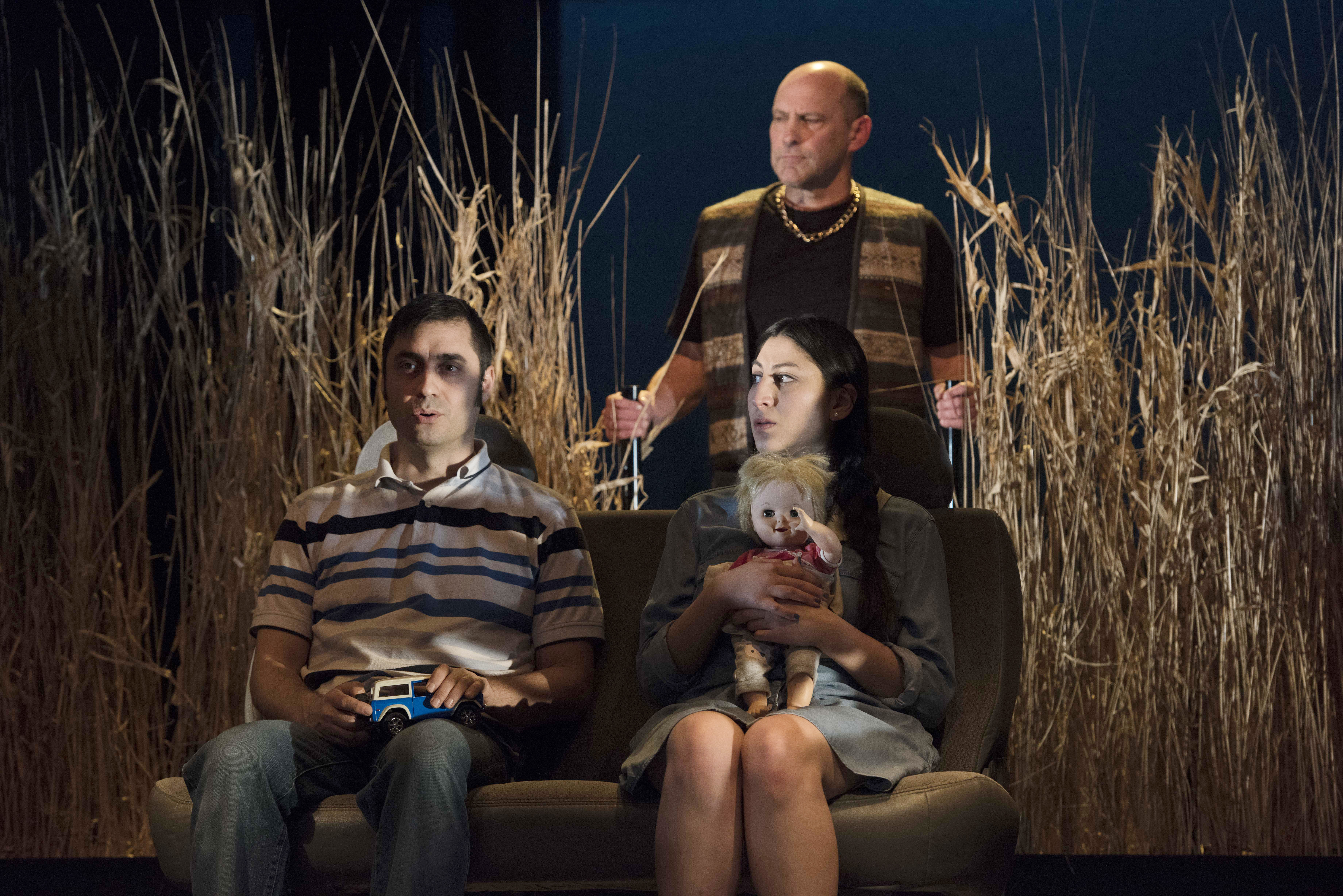 Finding the through line
Both plays rely on a cast of five, Caroline Gillis, Arggy Jenati, Gerry Mackay, Michael Scholar Jr., and Jenny Wasko-Paterson, who seamlessly switch roles both between the plays and within them.

“This cast of five is incredibly nimble and versatile,” says Rochon. “They, as well as the designers, have done this incredible job of taking on two different worlds.”

With 30 years of acting experience, Gillis plays the hospital bed-bound wife in Differently and the main character of Eve in Save the Reaper. Originally from Cape Breton, she lives in Toronto and was last in Victoria six years ago to act for Michael Shamata in And Slowly Beauty... Gillis says there’s something “beautiful” about performing this show in Victoria, as Munro lived and wrote there in the 1960s while her then-husband Jim ran the Munro’s Books store. Differently actually takes place in Victoria, among the “not very high, plain storefronts” of downtown and “windy shady streets” of Oak Bay.

“Something feels really special about holding her book up here in this beautiful city,” says Gillis. “It feels really organic and right and important that we’re putting such a major writer, not just of Canada but internationally, on the stage. It seems like time.”

Gillis also enjoyed the “challenge” of working in this new form. “I think as a middle-aged actor, I can only speak for me, but you can get a little complacent,” she says. “Her language is so beautiful and so detailed that it was oddly one of the most difficult things I’ve had to learn, because you just want to be so careful with it, but it’s been an amazing challenge.”

She says the cast’s nimbleness wasn’t easy to achieve. They had to find the balance between when they were acting as a narrator and when they fell into character.

“I think the main idea is to keep the idea of the story going,” she says. “It’s almost like you have to really know the story so well that you keep it moving forward and not get bogged down in the moment.”

Alice Munro’s famed ability to move through time in her writing features in both of these stories, and Gillis says this affected the way she approached the acting.

“It’s almost like she writes the way one has a memory or the way one thinks, where we sort of jump around,” says Gillis. “I think often plays, even non-linear plays, are more linear in their thinking, so you have a certain through line in a play that if it’s a well-written play it’s quite clear.

Because of the jumping back and forth [in Stories], the through line isn’t as clear as it normally is for a play written as a play.”

The extra narration didn’t result in less acting per se, but Gillis says she had to come at it from a different angle. “A lot of the time you’re being a detective when you start a play and you’re trying to figure out why you are saying things,” she says. “I work a lot with Daniel McIver, and he might have a scene with very few words in it but there’s a lot being said underneath, so you’re trying to figure out what you’re saying underneath.

“In this way, on some level, [Munro’s] already told us what we’re feeling and those inner thoughts that go through all our minds within seconds when we find ourselves in weird situations, or banal situations, or day-to-day situations. It’s almost like coming into it through a different portal.” 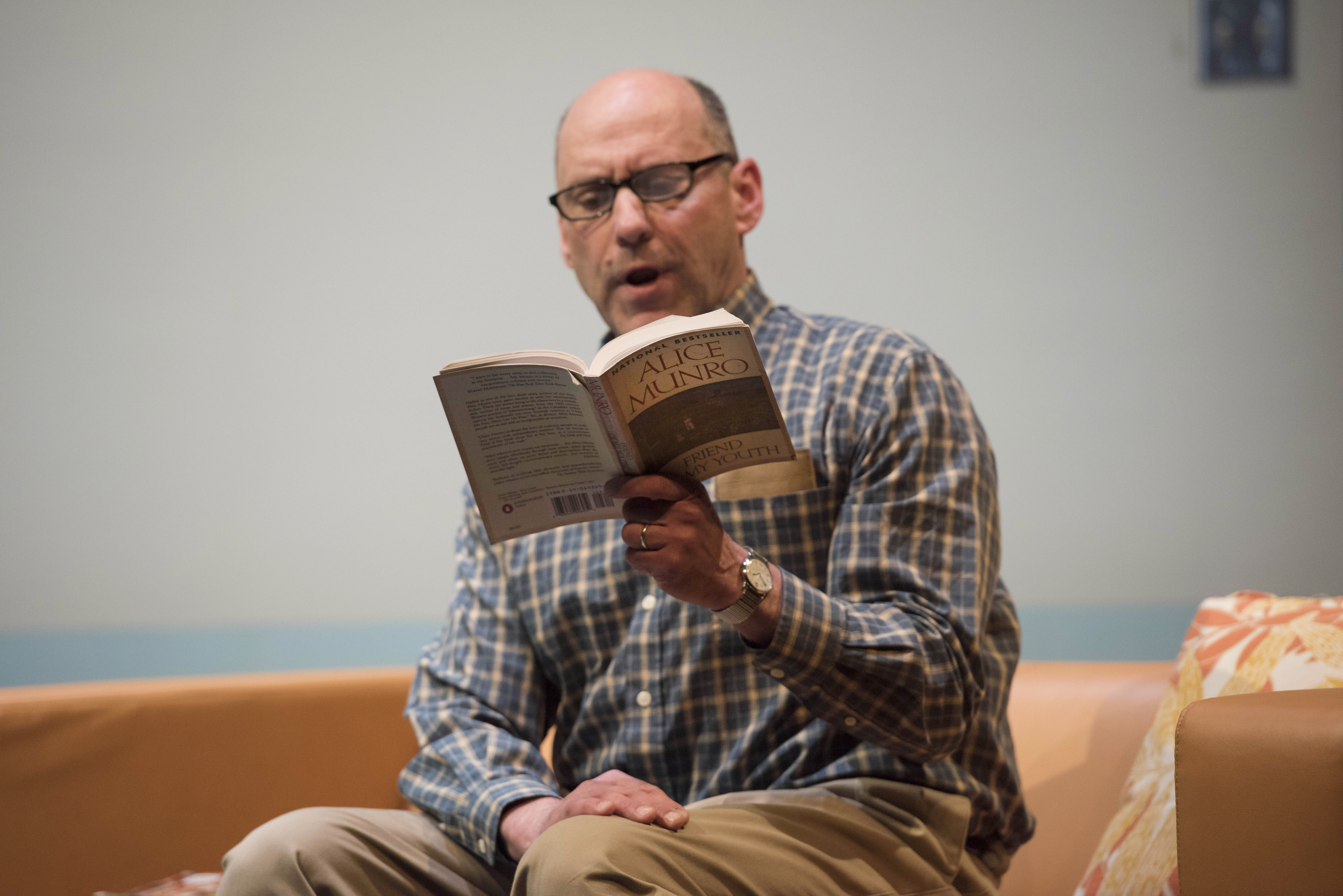 Future of the genre
Gillis says the style of this genre actually reminded her of the late, great Stuart McLean of CBC’s Vinyl Café. “I think of that storyteller—rest in peace—what an art it really is. It really is a true art, storytelling, a slightly different art than acting,” she says.

Rochon had somewhat of a training experience for Stories when she staged three collections of poetry in the play, Initiation Trilogy for Vancouver’s Electric Company Theatre in 2012. “The lesson I really learned there was, the less you kind of screw with it, the more you keep it in its intact form, the more you’re able to hear it and appreciate it.”

She is open to doing this type of play again in the future. “I think certain authors are going to lend themselves better to this kind of work than others,” she says, “but absolutely I think it’s an approach that I would be excited to take again, given the right context.”

Rochon also mentions how Munro wants her stories to be like a house that you can revisit and discover new rooms and think the idea fits. “I find this with Shakespeare, every single time you hear it, or read it, you see a new detail is uncovered, a new connection is uncovered, so it continues to be rewarding day after day because of the richly textured nature of her stories.”

While familiar with Munro’s work, Gillis hasn’t read any of her stories in about 15 or 20 years. She says this experience has made her want to go back and read them all again.

“I think I had forgotten how human they were, the humanity and the non-judgment,” she says. “I think there’s a non-judgment in her stories of people’s errors and people’s frailties as humans and I think, I don’t know, I just think that’s really beautiful.”

If you’re in Victoria, you can revisit these two of Alice Munro’s stories at the Belfry Theatre until May 14.

Or, you can always pick up one of her books and wander its rooms and corridors.