join us donate
LOG IN or SIGN UP
Liquid syntax error: Error in tag 'subpage' - No such page slug join
find a vendor
November 01, 2012

British street paper The Big Issue in the North has launched a digital alternative to its printed magazine. The first digital street paper edition went on sale in Manchester this past Monday and will roll out across northern England in the following weeks. A small number of North American street papers are looking to adopt the digital model, as well - but how does this new system work, and what do the vendors think about it? 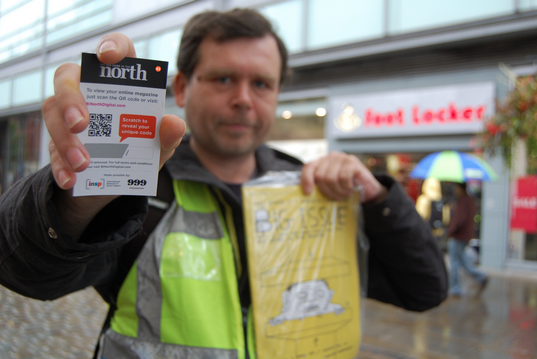 Photo: The Big Issue in the North

In the past year alone, street papers have helped more than 28,000 homeless vendors to earn an income. United in the International Network of Street Papers (INSP), the publications are sold in over 600 cities. With media consumption patterns rapidly shifting from print to digital, INSP has been looking for a way to take the concept into the 21st century and provide a lifeline to the growing numbers of urban homeless.

In the month that US magazine Newsweek announced to scrap its print edition and the Financial Times said that its digital subscriptions had surpassed print ones, INSP believes it has found a model that is unique to street papers.

The new digital street paper will allow street vendors to offer their customers two options - print or digital - priced equally. To retain the crucial vendor-buyer contact on the streets, customers choosing the digital version will buy an access card with a QR code which can be scanned or entered onto smartphones, tablets or desktop computers. The device will then download a digital edition containing all the content from the magazine.

Following the initial pilot in Manchester, another of INSP's street papers -StreetWise in Chicago will also pilot a digital edition. If successful, the digital technology will be made available to all 122 street papers in the INSP network.

Not about replacing traditional print magazines; rather, moving with the times

INSP's Director Lisa Maclean believes the content of street papers is key to the success of the model:

"Street paper vendors aren't selling just anything - they're selling news and information. Street papers, both in print and digital form, can challenge public perceptions of poverty and social injustice. With more than 6 million readers globally, they provide a powerful platform for unheard voices. We believe this project has the potential to become not only one of the world's largest paid digital media platforms, but one of the most important, too."

Caroline Price, Director at The Big Issue in the North said:

"It is hoped that the digital edition will help the magazine, which has been in circulation in Manchester since 1992, continue to be a success. Manchester is the right place to trial the world's first digital street newspaper; we are a digitally savvy city with a vibrant young community who we hope will support this initiative. This is not about replacing our traditional print magazine; it is about moving with the times and giving people a choice in how they read the magazine."

"The Big Issue in the North's primary aim is to provide homeless people with the opportunity to earn an income. In order to continue to do this, we need to ensure we appeal to a broad range of readers, including people who choose to read newspapers and magazines in digital format."

Street paper vendor Craig currently lives in a hostel in Manchester. Following job loss and suffering depression, he landed at The Big Issue in the North. He has been selling for eight months and believes the digital move is a good idea:

"The magazine has to be competitive and if people stopped buying it, we'd all be out of work. Hopefully the new digital edition will reach a new audience. It's also a good move for vendors as the new cards are easier to carry around than the magazine. I hope the cards increase sales - that'll be good for everybody."

Street papers, like The Big Issue in the North magazine, exist to help homeless and vulnerably housed people earn a dignified income. From the first-ever street paper in New York in the late 80s, the concept has grown into a global movement against poverty and social injustice - with over 120 different titles now published in 40 countries.

To take a look at a sample issue of the magazine, visit www.binorthdigital.com and type in the following access code: RC8XPFAG/2352