join us donate
LOG IN or SIGN UP
Liquid syntax error: Error in tag 'subpage' - No such page slug join
find a vendor
November 26, 2013

Yoga for all: Bringing the healing powers of yoga to women in prisons 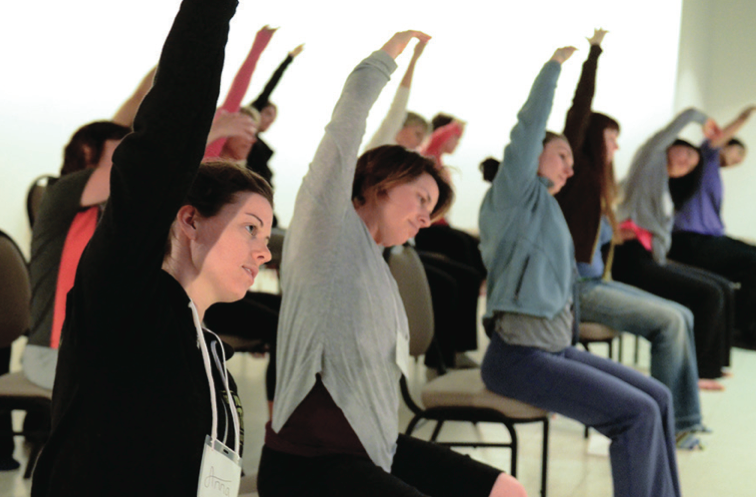 For anyone who’s seen Orange is the New Black, the new series released by Netflix, yoga in prison may bring images of some people trying desperately to hold it together while others barely pay attention. The reality is that there are real correctional facilities full of women in need of the recuperative, restorative and regenerative work that yoga offers.

In 1996, Vancouver-based Yoga Outreach was founded to help meet that need, launching their first program in the Matsqui Institution medium security facility in Abbotsford.

“I know people who would say, ‘It should be stressful in prison,’ but the reality of the situation is that people in prison are mentally ill, have addiction issues, or are there because of situations beyond their control,” says Delanie Dyck, executive director of Yoga Outreach. “So if we can give them an opportunity to give them room to breathe, that’s a good thing.”

The organization utilizes volunteer yoga teachers from across disciplines— hatha, ashtanga, vinyasa, you name it— who want to extend the service aspect of their yogic path.

“[Correctional facilities are] a tricky environment to teach yoga in,” explains Dr. Alison Granger-Brown, Yoga Outreach’s first vice president, who is currently a corrections consultant at Fraser Valley Institution working directly with female offenders. “You’re dealing with a population with a very high incidence of sexual and physical abuse history.”

To best help this vulnerable population, Yoga Outreach has developed a special 20-hour course. In it, yoga teachers learn to take a trauma-informed approach: tactics such as using invitational language, not making physical assists with students and staying at the front of the room to demonstrate everything rather than walking around. Ultimately, the goal is to bring peace to those struggling in a challenging world.

“The most significant benefits for women is in the emotional area and in the place of finding peace,” says Granger-Brown. In her own teaching, she discovered that she could relate a woman’s use of prescription medication or opiates as an attempt to find a place of relaxation and peace, and help them transition to finding that peace with yoga instead.

“One of our students in recovery said that the classes were like her lifeline,” says Dyck. “Sometimes the thing that kept her going was being able to go to yoga class, it made such a difference for her to have the relationship with the yoga teacher.”

Unfortunately, not every woman can benefit from the healing that can come from ongoing yoga sessions. Granger- Brown says continuity is the biggest obstacle. “When women get out [of the facility] they are frequently homeless, living on welfare and, to be perfectly honest, they’re not necessarily leading the healthiest lifestyle.

“I’m thinking of one woman, and whenever she’s in [the correctional facility] she gets really into [yoga],” she says. “[But] there is no way that she has the money to go to a yoga class in the community.”

While Yoga Outreach has expanded over the years to also offer programs to at-risk youth, mental health patients, people recovering from addictions and women who have experienced violence, there is room to grow the offerings of yoga to a cash-strapped community.

In the long term, Yoga Outreach hopes to expand across the province by assisting in connecting yoga teachers with groups who can benefit from the practice.

“Anyone who does yoga knows that yoga works,” says Granger-Brown. “It makes you feel good whether it’s physical, mental or emotional. So why shouldn’t people who have had pretty challenging lives have the opportunity to experience that?”